A culmination and a beginning 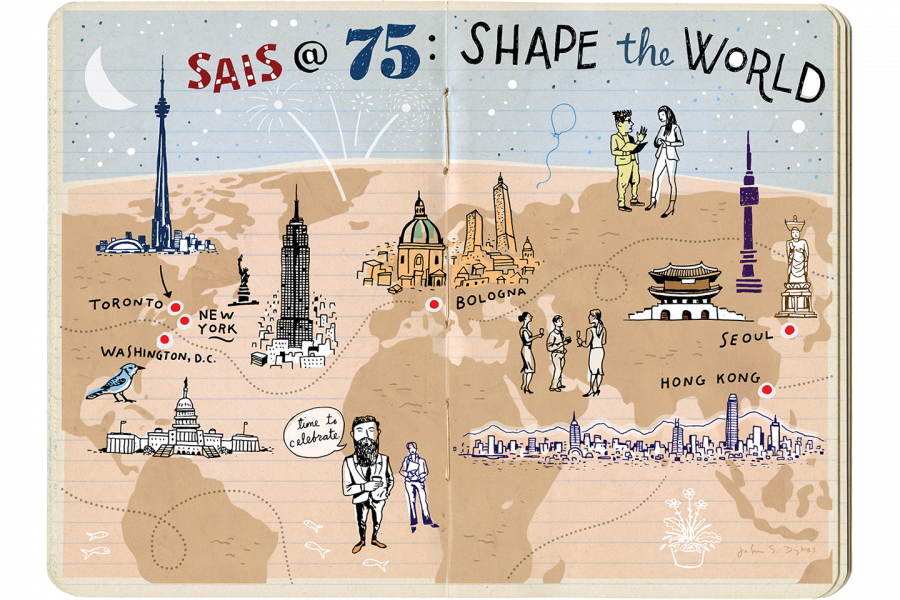 In 1943, Johns Hopkins SAIS was established to train the leaders that would shape the new international order following World War II. This year's 75th anniversary celebration looks back on the school's legacy and to its future in an ever-changing world. In that spirit, the school will host the Shape the World Celebration October 24–25, kicking off with a Thursday evening reception at the Newseum building in Washington, recently announced as the future home of the school's D.C. campus. Jeffrey Goldberg, editor-in-chief of The Atlantic, will be the featured speaker at Friday's event. "It's both a culmination and a beginning," says Sean Ryan, SAIS '93 (MA), a partner at consulting firm A.T. Kearney and chair of the 75th Anniversary Steering Committee. "We need to be thinking about it as a starting point to take SAIS to the next level, to be an even larger voice at a time when larger voices are really needed."

Throughout the past year, anniversary programs have taken place across the globe, inviting alumni to learn, debate, and reconnect over wide-ranging topics including U.S.-China relations, renewable energy, and digital threat intelligence. Elizabeth Madigan Jost, SAIS Eur '97 (Cert), '98 (MA), chair of the 75th Working Group of the SAIS board of advisers, was at one such event on the future of North America, held at New York City's Metropolitan Museum of Art on January 25, the day the university announced its acquisition of the Newseum building. The chief operating officer for Morgan Stanley Latin America, Madigan Jost credits her SAIS education with her ascendant career trajectory. "SAIS empowers you with the ability to see the big picture—and see through the big picture, to what the key levers are and how you monitor and potentially influence those levers," she says. "It's also a tremendous network, one that I continue to leverage to this day."