The rise of women philanthropists at Carey has been led in part by the powerhouse personality of Karen Peetz, a university trustee and alumna 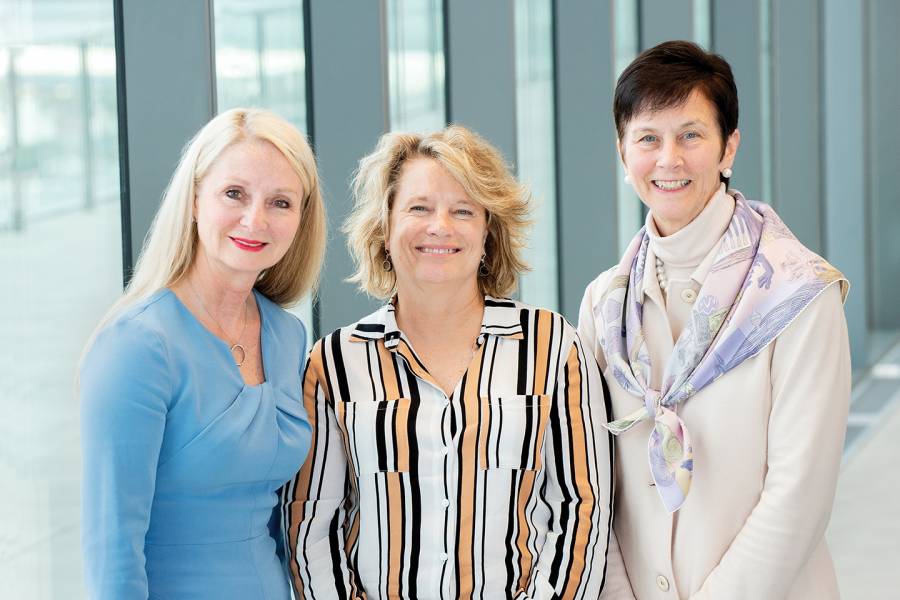 In 1980, Karen Peetz enrolled at Johns Hopkins as a master's student in a predecessor of the Carey Business School. One of 25 students selected for the Hopkins Fellows in Organizational and Community Systems program, Peetz—just starting out her career in banking—had classmates from fields as diverse as education and telecommunications, and from organizations that included the United Nations. Over the course of a year, the group tackled coursework and projects related to the unique challenges presented by their various workplaces.

"My program revolved around the study of change in business—how you could assess situations, decide on the elements of change that might be needed, and work with whoever your team happened to be, big or small, and help them agree on what needed to be done," says Peetz, whose nearly four-decade career included serving as the president of BNY Mellon and a member of the board of directors of Wells Fargo. "Banking certainly changed dramatically over my career," Peetz adds, "so that learning, that methodology, was fundamental not only to how I operated but why I ended up going the distance."

The role Hopkins played in Peetz's professional trajectory was one of the reasons she joined the university's board of trustees and in recent years chaired the Carey Dean's Advisory Council. It also motivated her to join a group of Carey alumnae whose philanthropic leadership is boosting support for students in the school.

"Business schools thrive on supportive alumni, and we are fortunate that some of our most accomplished and engaged graduates are giving back to our school," says Bernard "Bernie" Ferrari, dean of the Carey Business School. "They help our graduates find employment, and their financial support benefits our current students. The Carey Business School's student body is almost evenly split between women and men, which is a statement we are proud to make."

The rise of women philanthropists at Carey reflects larger trends in other societal spheres. In the United States alone, the share of wealth held by women is growing; an American Express study showed that women-owned firms with $10 million or more in revenues increased more than 56 percent from 2002 to 2012. Other research has found that women cast their philanthropic nets wider, and in some cases give more generously, than men. A report from the Women's Philanthropy Institute showed that on Giving Tuesday 2016, women made 63 percent of the donations and gave 61 percent of the total dollars raised by participating organizations.

"There is a natural progression here," says Morgan, CEO of the Baltimore-based information technology firm Basys. "Women are doing better financially and professionally. They're thinking about the common good, and they want to pay it forward. That's a very strong message, and it's why women are now coming forward to do what they're doing in philanthropy."

"If I can help other women really advance in their careers, that would be wonderful."
Jenny Morgan

Regarding her decision to support the Women in Leadership academy, Morgan adds, "If I can help other women really advance in their careers, that would be wonderful."

Wilson participated in a program Hopkins offered from the 1990s through 2013 called the Leadership Development Program for Minority Managers and later pursued her MBA at Hopkins. She credits the skills she gained from both her certificate and degree programs with helping her launch her own business, T47 International. The professional staffing company, based in the Washington, D.C., area, grew from three employees in 2017 to 96 at the end of 2018. She hopes her support for scholarships related to a new program at Carey, the Leading a Diverse Society initiative, will enable students from underrepresented groups, particularly women, to follow similar paths.

"As women leaders, there is an obligation for us to give back in a significant way to make a difference in another woman's life, especially if they come from an underserved community," Wilson says. "There's something about giving that encouragement and giving to set an example—to show a young woman in an underserved community that she can make it, too."