Showing up for each other

When Andi Shahu, A&S '13, moved into Baker House in the fall of 2009, he had a case of freshman nerves. It didn't last long—his first night at JHU, he met Milton Gholston, A&S '13, SPH '14 (MHS), his next-door neighbor. "I remember thinking that he was really funny, and really easy to get along with," Shahu says. Over the next four years, they grew close, seeing each other through the gauntlet of organic chemistry, hanging out at the gym, and eventually becoming roommates. "The best discussions, the best experiences were just being able to talk stuff out as we were getting older and starting to think about what our values were as adults," Shahu says. 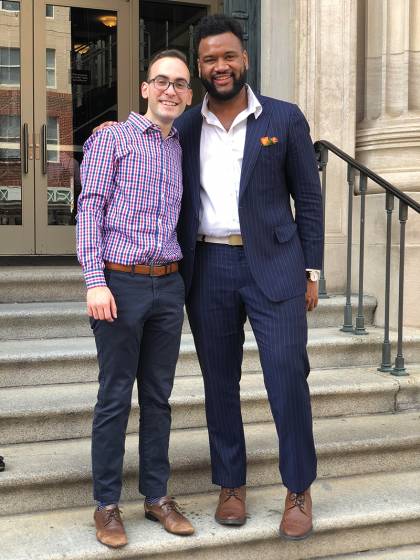 High on the list: Making time for the people you care about. After graduation, Gholston stayed in Baltimore to complete a master's program before going on to med school, while Shahu moved to New Haven to start medical school at Yale. But long shifts at the hospital wouldn't get in the way of showing up for each other. In 2016, when Shahu ran his first marathon, in Philadelphia, Gholston was standing at the finish line. "I remember him texting me right after I crossed the finish line that I 'made it look easy.' That made me laugh because I had really struggled through the last 6 miles," Shahu says. "Ever since college, I've thought of Milton as the brother I never had, so it felt fitting when I saw him with the rest of my family after the race."

That bond has helped them both survive as they launch demanding careers in medicine. After Gholston got into med school and Shahu passed Step 1 of his boards, they planned a getaway to Punta Cana for some prime beach relaxation time. And on late-night phone calls, they've counseled each other through major decisions about applications and residency programs. "Andi came to match day, a ceremony where you figure out where you're going to go for residency," Gholston says. "That was really important. It just shows that we're able to support each other and be there and make an effort."

Looking back, they see their meeting in Baker House as a small but mighty moment in their lives, one that galvanized years of friendship and mutual admiration. "My favorite thing about Andi is that he wants to improve everything," Gholston says. "No matter where he goes, no matter what institution, he's always looking for ways to make things better."

"He really knows how to bring out the best in someone," Shahu says of Gholston. "He helps you, in a weird way, see yourself from the outside. And I feel like as a result, I really understand myself better because I know him."