Researchers from the laboratory of Aaron W. James, associate professor of pathology, recently approached Scot Kuo with a seemingly intractable problem. The team was investigating how broken bones heal and needed to image bone and muscle tissue within the leg of a live mouse. The mouse's leg would be bathed in saline solution, however, and none of the microscope technologies with which the researchers were familiar would work in such a wet, messy environment.

Kuo and his team quickly came to the rescue, 3D-printing a special trough to hold both the mouse's limb and the surrounding saline solution. They also provided a high-resolution microscope equipped with a specialized objective lens that could be dipped directly into the liquid. 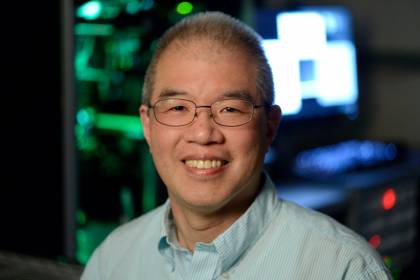 As the director of the School of Medicine's Microscope Facility, Kuo regularly supplies researchers from around the university with the high-resolution imaging tools they need to investigate everything from cancer to Alzheimer's disease. His arsenal of more than 20 instruments can bring to light minuscule proteins inside cells and reveal individual synapses in the brains of mice and zebrafish. Some of his equipment can even cheat the laws of physics.

This spring, the Chan Zuckerberg Initiative, a foundation launched by Facebook founder and CEO Mark Zuckerberg and his wife, pediatrician Priscilla Chan, awarded Kuo $1.2 million in funding to improve imaging technology and increase collaboration between biologists and technology experts.

Kuo is constantly searching out new and emerging technologies—which tend to rely just as much on high-powered computational methods as on innovative ways of manipulating light—that could help researchers capture even more detailed images of objects ranging from neurons to cancer cells.

Consequently, he often gets calls from scientists who are hoping to use the most cutting-edge instruments in the facility. But Kuo knows from experience that not everyone needs the fanciest microscope in his collection. Rather, they need the right tool for the job.

"We try to be matchmakers, matching people to research technologies across campuses and to the unique ones that we have here," says Kuo, an associate professor of biomedical engineering and cell biology. "And if it's futuristic stuff, we try to get it," he says. Kuo and his staff also provide researchers with the training and support they need to use the equipment. The more advanced the technology, the more important that becomes, since the most cutting-edge microscopes are also the most difficult to operate.

These days, he says, the instruments in highest demand are so-called superresolution microscopes.

"We try to be matchmakers, matching people to research technologies across campuses and to the unique ones that we have here. And if it's futuristic stuff, we try to get it."
Scot Kuo
Director, Microscope Facility

Resolution refers to an instrument's ability to distinguish between two objects, be they stars viewed through a telescope or bacteria seen under a microscope. The higher the resolution, the more detailed the image. But in the 19th century, physicists discovered that the way light scatters as it passes through an aperture imposes limits on the resolution of an optical device. In practice, this means that a conventional microscope can't distinguish objects that are less than 200 nanometers across, or roughly the width of a typical bacterium.

Over the past several decades, however, scientists have used fluorescence, lasers, and high-powered computation to blast past those limits. Today, Kuo says, the Microscope Facility has instruments that can achieve resolutions that are more than 10 times better than what physics once deemed possible, allowing researchers to see things that were previously beyond the reach of optical microscopes.

Alas, while those microscopes can do miraculous things, they also present trade-offs.

The highest resolution device in Kuo's instrumentarium—which spans multiple rooms in the Wood Basic Science and Physiology buildings and includes devices that resemble industrial robots or exotic stereo equipment—can resolve proteins that are spaced a mere 10 to 15 nanometers apart. But because the technique is slow, looking at just a few dozen molecules at a time, it isn't really suitable for imaging live cells as they move about.

For that, you'd want the latest addition to his collection: a lattice light-sheet microscope that uses ultrathin beams of laser light to produce 3D images at a rapid clip. Because of its speed—it can capture 100 frames per second—the technology is ideal for filming cells in real time.

Scientists mapped entire brains at nanoscale for this psychedelic visualization

How to rapidly image entire brains at nanoscale resolution

Producing all those high-res images generates so much data that just storing it is problematic. 3D movies of crawling cells, for instance, can produce 10 gigabits of data per second, and a day's worth of experiments can rack up more than a terabyte. Kuo had to build a custom data center just to manage the vast quantities of data produced by the instrument.

Analyzing the oceans of visual data produced by modern imaging methods is no easy task, either. Tracing neurons in the brain, for example, requires stitching together hundreds or thousands of high-resolution images taken from different depths and positions.

"How do you take this monstrous amount of data and structure it so that people can navigate it?" Kuo asks. "Even our hefty computers choke on these monster images without the help of special software."

Fortunately, such programs are now commercially available. Using software inspired by Google Maps, Kuo helps researchers zoom in and out of their microscope data, pulling back for low-resolution, high-altitude overviews and moving in for high- resolution close-ups.

The next big thing, Kuo says, is a technology called adaptive optics. Today's microscopes cannot capture sharp images deep inside organs like the heart or brain because of the way light refracts, or bends, as it travels through layers of different materials such as muscle and protective tissue.

But just as astronomers have devised ways of compensating for the atmospheric distortions that would otherwise blur the view seen through the most powerful land-based telescopes, so too have scientists recently developed high-tech methods for correcting the distortions caused by layers of biological materials.

Once commercialized, the technology would allow researchers who study brain development and neurodegenerative diseases such as Alzheimer's to observe synapses not just on the surface of the brain but also deep inside it.

It will also generate even more data, and present even greater technical challenges, than anything currently available. Which means that Kuo and his team will be busier than ever.

"It's a real tour de force," Kuo says of the technology. "But user-friendly this is not."