From corporate finance to botanical brewing 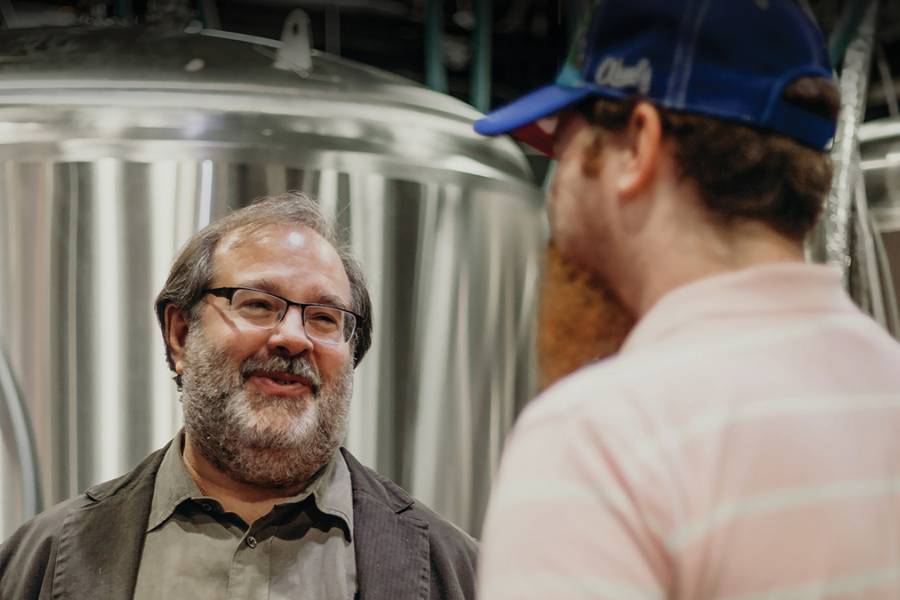 Image caption: After two decades in finance, Robert Finkel became owner and rootmaster of a Chicago brewery and restaurant.

Robert Finkel, A&S '85, calls himself a "refugee of the corporate world." Two years ago, after two decades in finance, Finkel took on a new job title: owner and "rootmaster" of Forbidden Root, a popular Chicago craft brewery and restaurant that flavors some of its beers with natural botanicals, including barks, stems, flowers, herbs, spices, and roots. Its products are available across the Midwest and as far away as Florida. While he's still on the board of Prism Capital—the private investment firm he founded in 1999 that currently has $190M under management—a fixation on the original taste of root beer led him to plunge into a self-styled take on craft brewing.

How and why did root beer spur a career change?

I've always loved root beer. There's a nostalgic attachment to it as one of those flavors you remember. And a question long macerating in my brain was, What was old-fashioned root beer like? When you were in a Dodge City bar and the barkeep slid over that mug of sarsaparilla, what did it taste like? And then I started thinking about, Well, why isn't there a root beer beer? Along the way, I met Randy Mosher, a best-selling beer author and an authority on beer recipe development. I hired him as a consultant in 2015, and we worked on this idea. And after six months of work, he said he'd like to be a partner in a venture to create it, along with a line of botanical beers.

After all that, why do you no longer make a root beer beer?

While we were one of the first with such a product, seven others came to market, most notably Not Your Father's Root Beer. And they were all sweet. They were all really not beer as much as hard soda. And our vision was for a craft brew, not a soda. So I yanked the product. I didn't want to be associated with trendy hard sodas for a variety of reasons. I didn't want kids drinking my products for one. So, we moved on and developed other products.

Do you think you achieved a good approximation of what those cowboys might have had in a Wild West saloon?

We'll never know, but I wasn't trying for Civil War–reenactment-level accuracy. We were just trying to create something that we loved, and we did that. And that was what catapulted us into the broader market of botanical- inspired beer.

Yeah, what's that all about?

Just a little context: Hops have been around for about 800 years, and man has been brewing for 10,000 years. So there's a long history of brewing and fermenting and flavoring beverages with other ingredients. I helped develop our Cherrytree Amaro beer, a nod to the Italian liqueur. It has no cherries in it, but it does have cherry stems, which is a product I found at a Middle Eastern tea shop here in Chicago. And the stems give you a reference to cherry but not quite a straight-ahead cherry flavor. It's a cool beer we make every once in a while that also has citrus and spice flavors—like Amaro but as a beer.

Was your decision to leave finance an "aha" moment or more gradual?

Over time, I realized I no longer wanted to spend my days as a venture capitalist/private equity professional. Part of that process was knowing I didn't want my tombstone reading, Here Lies a Great Asset Manager. That was never my life's aspiration. Well, what did I want to do? What sounds fun and what would I be passionate about? The more I spent time on the root beer idea and brewing, the more I felt that it could sustain my soul.

Now you are rootmaster. What does that entail?

It tickles me every time I look at my business card. It just warms the cockles of my heart to see that I have assigned myself a role doing exactly what I want to be doing—things like flavor development and traveling to interesting places and finding new ingredients. I run what I find by the crew, and we work on extracting flavor from them and seeing how they work in combination with certain kinds of beers. There's no typical day. It's very hands-on, which I really enjoy. Before, as an investor, I started to relish being alone in my office with my phone and computer because I could be most productive that way. But I was getting disconnected. My wish today is to be around people drinking beer.

What are some of your new or forthcoming botanical beers?

We have a series of fruit sour IPAs that we've been developing, one of which is Sprinkles Required, featuring rooibos tea and hibiscus. We're formulating a pilsner called Purple Pils with lavender, violet, orris root, and tuberose. We'll use a great deal of restraint, as we always do, so no grandma's perfume. Early tastings indicate that this beer will be an incredibly lovely, approachable, yet subtly complex beer that could make a nice addition to our line.

Any skills from your old world help you in the new one?

Oh, yes. In investing, you learn to be methodical and disciplined and write down formal plans and understand proper capitalization with the intention of rolling long term, as opposed to achieving short-term profit. So, I was fortunate enough to be able to properly capitalize and think through the needs of the business and properly structure it. And that's a set of skills that most in the craft beer industry don't have.

Say, does any of your beer enthusiasm date back to your Hopkins days?

Interestingly, I ran for freshman class president and won. And I won on an anti-National Premium platform. National Premium, like Natty Boh, was a local beer that was cheap but not very good. [The drinking age in Maryland was 18 when Finkel was a freshman.—Ed.] I mean, I'll allow that they might have been decent beers back in my father's day. My anti–National Premium platform was part of my flyer. It was a popular position.