At a memorial service for Nadia Morgan, SPH '16 (MHS), at Johns Hopkins Bayview Medical Center, colleague and friend Philip Seo told the standing-room-only crowd he was sure that he was Morgan's favorite. He supposed many in the room could relate, he said, "because that's how Nadia made all of us feel."

Morgan, 35, was a junior faculty member at the Johns Hopkins Scleroderma Center when she was killed in a three-car accident in December 2018 by a driver who ran a red light. Coworkers like Seo, an associate professor of medicine who had recruited Morgan as a fellow to the Division of Rheumatology, reach for language to convey the magnitude of Morgan's gifts, among them her exceptional energy, commitment, and attachment to her family and home country of Jamaica. 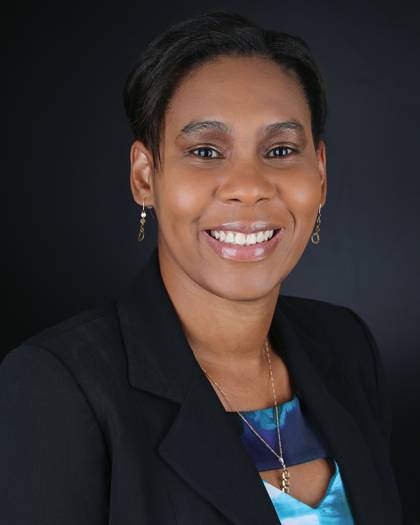 Fundraising for the Nadia D. Morgan Memorial Fund began within days of her death, at the instigation of Frederick Wigley, Morgan's supervisor and mentor at the Scleroderma Center, and Antony Rosen, director of the Division of Rheumatology. The goal is to sponsor an annual lecture reflecting Morgan's interest in the association between African ancestry and rheumatic disease presentation and to provide support for fellows to attend national meetings in their areas of interest.

A graduate of the medical school of the University of the West Indies in Kingston, Jamaica, Morgan completed her training in internal medicine and served as chief resident at the State University of New York Downstate Medical Center. During her fellowship at Hopkins, she worked with patients at the Scleroderma Center, which specializes in treating the rare autoimmune disease. Wigley, a professor of medicine and the director of the center, says Morgan developed an appreciation for the clinical challenges in caring for patients with scleroderma, which afflicted one of her relatives, as well as an interest in researching why the disease presents earlier and more virulently in patients with African ancestry.

Morgan became the principal investigator on both a grant from the Rheumatology Research Foundation and for Hopkins' site in the nationwide Genome Research in African American Scleroderma Patients cohort, or GRASP, the largest study ever conducted of African Americans with scleroderma.

"It penetrates," Wigley says of losing a cherished colleague, and of the ramifications of her absence. "Her care and her research left a huge gap in our Hopkins family, as did her trajectory as a very influential person in academic medicine. It's a great loss to her patients, who loved her, and to all the people she would have influenced and helped with her research, patient care, and teaching, all of which she was talented in." He adds that he and other colleagues are working to complete and publish research Morgan initiated.

Christopher Mecoli, an assistant professor of medicine in the Division of Rheumatology, characterizes his relationship with Morgan as "younger brother/older sister." The two were partners through their three-year fellowship at Hopkins, obtaining master's degrees in health science in clinical investigation at the Bloomberg School of Public Health during one of those years before joining the Hopkins faculty together.

"We knew how to push each other's buttons, but there was nothing but love and respect underneath it all," Mecoli says. "She was always sending me class notes, making sure I didn't miss an email. She wanted to make people's lives better, and she didn't stop at wishes. She made it concrete."

Morgan organized regular dinners at restaurants around Baltimore for their group of fellows along with the program director and program coordinator, and she "somewhat mandated" attendance, Mecoli recalls. "We liked to poke fun at her about the type-A way she organized these things, and 'proper' invitations were sent out, but we looked forward to them."

With that same drive, Morgan drummed up participation in the Rheumatology Division Choir, an idea of Rosen's. Attendance at the choir's first weekly practice was sparse: Only Rosen, Mecoli, and Morgan, who sang soprano, showed up. Morgan was not having it.

"In the ensuing six days, she recruited basically everybody—an additional 25 people," Mecoli says. At her Hopkins memorial service, the choir gave its final performance of "Ukuthula," a Zulu hymn from Rosen's home country of South Africa, in four-part harmony.

Julie Paik, an assistant professor of medicine in the Division of Rheumatology and the Johns Hopkins Myositis Center, was on the faculty when Morgan joined as a fellow. She describes Morgan as both a compassionate clinician who always advocated for her patients and a brilliant research scientist who was awarded competitive research grants in scleroderma.

For Paik, too, Morgan was like a sister. In fact, Paik says, "she was like a sister to everybody." The two also bonded as Christians, a sentiment Paik appreciated hearing echoed by others at Morgan's Hopkins memorial service. "She always said about everything, good or bad, 'God is good. God is in control. God is with me.' I think that kept her grounded. She always gave thanks to God in everything. She was a deeply grounded person of great faith."