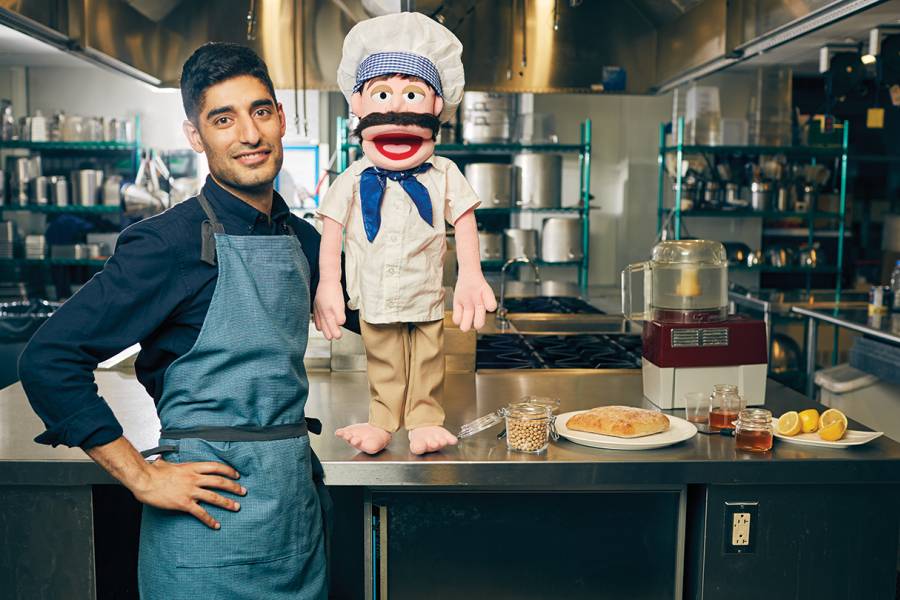 Modarres, pictured with the mascot chef of his company, Abe's Eats, aims to create the world's most inclusive food brand

In 2016, the majority of Mohammad Modarres' brainspace was consumed by the biotech company he had recently launched in California, but still, the omnipresent tweets of the day crept through. He couldn't avoid the deluge of social media vitriol—against women, minorities, the Jewish community, the Muslim community. "The list goes on," he says. "Any tweet, they all kind of added up."

Modarres, A&S '11, decided to host Shabbat Salaam, an interfaith dinner that would bring diverse groups of people together for a meal and conversation. But he had to find a meal that would comply with different religious dietary laws. "I had gone to other interfaith events, and the Jewish community would go to their catered line, and the Muslims would go to their catered line, and they'd get their food and then sit next to the people they were in line with," he says. "Even at these events, where people had really good intentions, they naturally separated themselves." Shabbat Salaam has since become an ongoing dinner series, with over 1,000 people having attended dinners in San Francisco, New York's Times Square, and beyond. In 2018, Modarres founded Abe's Eats, an inclusive food brand whose Interfaith Meat—including brisket, rib-eye steaks, and ground beef—is the first to be advertised as both glatt kosher and zabihah halal. Abe's Eats is employing some of the kitchen's workers with disabilities to produce the company's newest product, Hummus for All of Us. Modarres is expanding the brand's offerings and will launch a Kickstarter in late September to sell the meat to the masses. His new TED Talk, on the changing landscape of farming, came out October 1.

On Hummus for All of Us

"Our Interfaith Meat is a starting block for our company. But now it's about elevating products that have been associated with the Jewish and Muslim communities. It's unfortunate that Middle Eastern food in America is often associated with street food—kebabs and gyros. It's something that should be higher quality and owned by all communities. The hummus wars are over. This is literally hummus for all of us."

On his long-term goals

"In five years, I want to be the most trusted food brand in the U.S. There's a lot I want to do in regard to nutritional labeling and packaging. But in 10 years, I want to be a significant contributor to interfaith programming and inclusivity in this country, building partnerships with amazing grassroots organizations that have a history of tackling anti-Semitism and anti-Muslim bigotry. We want to help people celebrate their commonalities and come together."

On who inspires him

"I'm a really lucky guy. I never had an issue with my race, gender, or sexuality. I wish I was a couple inches taller so I could play basketball better, but up until the point someone knows my name—which is then associated with my religious identity—I haven't really had many problems. Every time I meet someone with great personal obstacles, they're someone to look up to and learn from. Sorry, that didn't answer your question at all," he says with a laugh. "Just put down Michael Jordan."