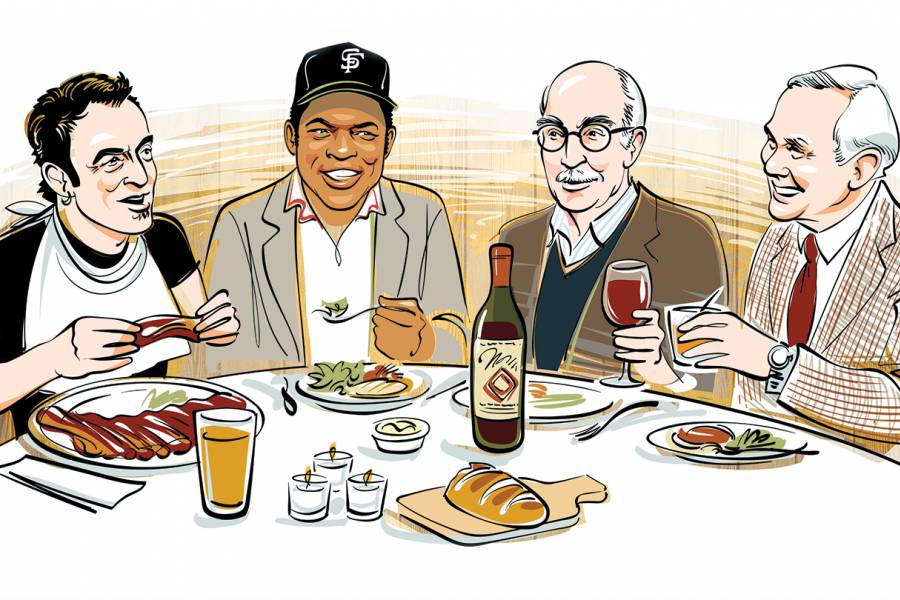 We asked readers to name four people—dead or alive—they wish they could invite over for dinner. Here's what they said.

Roger Angell, the (mostly) sports essayist and regular contributor to The New Yorker; Willie Mays, a Hall of Famer and my childhood hero who played for New York/San Francisco Giants; Bruce Springsteen, whom I've seen on every tour since the early '70s, going back to Greetings From Asbury Park, N.J. and The Wild, the Innocent & the E Street Shuffle; and Johnny Carson, who shaped American culture like no one else for 30 years. —Jeff Koenig, A&S '72

Lucille Ball, Gene Wilder, Lorne Michaels, and Tina Fey. It will be a celebration of laughter across the ages. —Amanda Leese, A&S '06

Michelle Obama, who is a remarkable role model for not only African American women but all women; Tom Brady, whom I admire for his drive, determination, and unending skills and accomplishments; my great aunt Sylvia, who passed away in 2010 and had a day named after her by former Boston Mayor Thomas Menino; and Martin Luther King Jr. —Michelle Chiles, Ed '08 (MAT)

Garth Brooks, who is not only one of my favorite entertainers of all time but also my celebrity doppelganger. The Prophet Ezekiel—I mean, have you ever read Ezekiel?! This guy is a trip! Judy Garland, who is likely the most famous person of all time, and with whom I share a birthday. Despite being one of the biggest stars of her time, she struggled with self-image and passed away shortly after I was born. Let's give her this fun night. I can't wait for her and Garth's duet. Forty-fourth President Barack Obama. I've agreed with him at times and disagreed with him at others, but no matter what, he's always been someone I've wanted to engage with in dinner and conversation. —Efrem Epstein, A&S '90

Michelle Obama, for her grace and wisdom; Carl Sagan, for his sheer brilliance; John F. Kennedy, for his political and historical perspective; and Teddy Roosevelt, for his vision and courage. —Theresa M. Flak, A&S '75 (MLA), Ed '81 (MEd)

Next up: Tell us about the best job you've ever had. Send responses to jdb@jhu.edu with "Icebreaker" in the subject line. If we print your response, we'll send you a JHU pocket notebook.