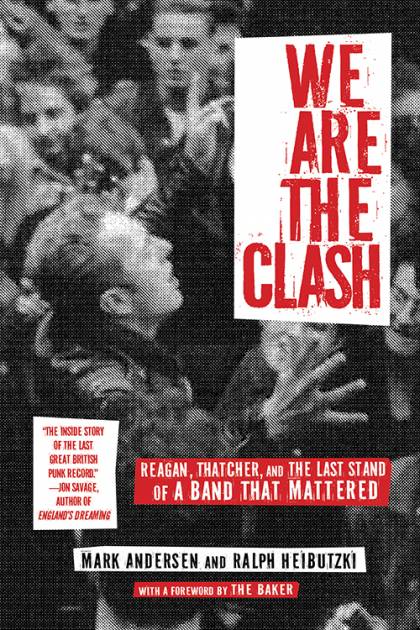 Fans of the Clash will never agree on the British punk band's best album. Everyone, however, agrees that Cut the Crap—the 1985 album recorded after both drummer Topper Headon and co-lead vocalist, guitarist, and songwriter Mick Jones were booted from the band by manager Bernie Rhodes and guitarist/vocalist Joe Strummer—is the worst. The Clash: Westway to the World, the 2000 documentary, ignores the album. The band itself left Cut off its 2013 box set Sound System. Rock history, a canon by and large constructed by journalists, musicians, music industry professionals, and fans who are still living, doesn't merely relegate this entire era of the band to a footnote; it acts like it should be forgotten entirely.

Journalists/activists Mark Andersen, SAIS '86 (MA), and Ralph Heibutzki disagree in We Are the Clash (Akashic Books). And how they disagree makes for one of the most rewarding music books you'll come across this year. They note that the band's lifespan, a decade from 1976 to 1986, overlaps with the ascendance of Margaret Thatcher's and Ronald Reagan's conservative politics and economic policies. And for a band like the Clash that so explicitly tied political activism and organizing to its music, ignoring its final incarnation, however challenged, cheapens an understanding of what the band aspired to do. This version of the Clash played 120 concerts, many in small, public spaces in the U.K., often vocally supporting England's striking miners from the stage.

Political action can't be removed from music for Andersen, who co-wrote the definitive account of Washington, D.C.'s punk community, Dance of Days, co-founded the activist organization Positive Force DC that became intertwined with D.C. music from the 1980s, and is currently co-director of We Are Family, the outreach organization serving low-income seniors in D.C. that he co-founded in 2004. And by focusing as much on the politics that motivated the Clash, We Are the Clash becomes a vital political history as much as an account of an underdocumented portion of a band's career. Great music books catalyze critical reconsiderations; We Are the Clash does one better, inviting readers to consider what matters to them: the creative commodities that artists produce? Or the ideals, however complexly and clumsily human they may be, that often compel artists to create in the first place.