Tell us about the Hopkins professor who had the biggest impact on you.

Alfred Blalock, the late professor and director of the Department of Surgery at Johns Hopkins, introduced his "blue baby operation" to the field of cardiac surgery in the 1940s. In my senior year, while on the surgical service, students were often in the operating room observing surgical cases. On one occasion, following a difficult congenital heart case, Dr. Blalock announced to the observers, "Always have the best and most talented operating partners and associates possible—they'll make you look great." I'm retired now after 45 years as a cardiovascular surgeon in Seattle, and this comment was instrumental in picking talented associates to join me in a surgical practice. —George I. Thomas, Med '49 (MD), HS '50 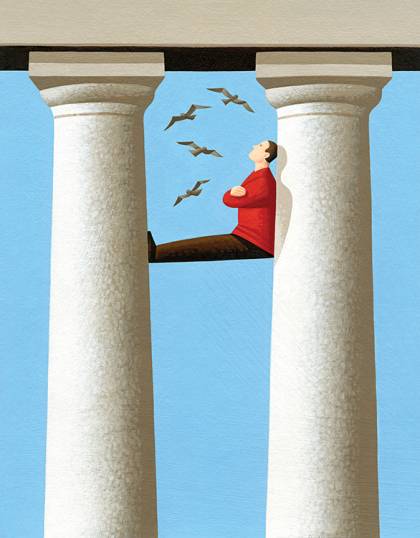 When I was an undergraduate, I was afraid—afraid that I was at the wrong school (not smart enough), that I'd chosen the wrong major (not interested enough), and in short that I had taken a path meant for someone else. Then I took Horace Judson's class in science writing and felt I'd found a home. Through his instruction, appreciation, and encouragement, at last I was in exactly the place I was supposed to be. As I send my daughter off to find her own undergraduate path, I hope that some professor gives her a home when she needs one. —Sue Kaplan, A&S '84

When I was a junior, I was a biology major who had no interest in art. I found museums to be a waste of time. Somebody told me about Phoebe Stanton, who was teaching art history and was rumored to be a very interesting instructor. My girlfriend (now wife of 39 years) and I signed up for a class. Dr. Stanton brought art and history together in a way that opened my eyes to a whole new world. I distinctly remember an assignment where I needed to write a paper about a single Grecian urn at the Walters Art Museum. I studied the piece on a Saturday, started writing about the figures on the urn, and then looked at my watch and realized that I had been with that one piece for over five hours. My wife and I have since traveled the world visiting art galleries, churches, and museums. —Bruce Fox, A&S '78

It would have to be David Spring in the History Department. At my impressionable age back then, I thought he knew everything. His lectures were the absolute model of what a good lecture should be, and in class assignments he demanded clear writing and rigorous thinking. I used to half-joke that he probably turned into history majors half of us who had contact with him. And I was one of them. —William F. Mugleston, A&S '63

I have never forgotten Maurice Bursey's kindness and desire to help me when I most needed it. It was final exam time in organic chemistry, and I completely folded. I was in a downward academic spiral, suffering from emotional immaturity and undiagnosed attention deficit disorder. I couldn't study, and knowing that I would fail the final, I didn't even show up. Dr. Bursey sent word that he would like to see me. I explained what had happened, and he unexpectedly asked me if I would like another chance: Study over the summer and take the final again in the fall. I accepted, did the work, and passed. Subsequently, I grew up a bit, learned to study effectively, and ultimately enjoyed a successful academic career. —Clayton H. Kallman, A&S '66, SPH '78 (MS)

Phoebe Stanton's courses in modern sculpture and architecture continue to guide me on how to appreciatively look at the world, 45 years after her brilliant lectures in the MLA program. —Michal Makarovich, A&S '72 (MLA)

Dr. Henry Perry was an incredible advocate for primary health care, one who was always available to chat about anything, from life issues to professional confusions. —Héctor Carrasco, SPH '17 (MPH)

Vernon Lidtke was by far the most important influence on me as a student at Hopkins. I wasn't even a history major—I majored in anthropology—but after having had him as an instructor in Occ Civ, I took every class he offered while I was an undergraduate. Professor Lidtke was a German historian specializing in the cultural history of the German labor movement. After I graduated, I took stock of what I was most interested in, went on to earn a doctorate in German history at the University of Michigan, and wrote my first book about the cultural history of the German labor movement (focusing on music and theater). If that isn't influence, I don't know what is. —Rich Bodek, A&S '82

Robert H. Roy, who was dean of Engineering and director of a National Science Foundation-sponsored Johns Hopkins library project, taught me the importance of teamwork. Often, we think of a project team as consisting solely of the consultants or researchers, and we forget about those who will have to live with the conclusions or recommendations. Dean Roy had good experience in implementing many project recommendations and he taught me well.

When I joined Corning Glass Works in July 1965, I remembered Roy's teachings. I realized that implementation becomes much easier if the team is well-represented by advisers as well as those who will be making the changes in their workplace. In my first project, in which television bulbs had to be shipped from three plants to eight customers, we used a mathematical technique to find "a better, optimal shipping alternative." Rather than go to the vice president overseeing these plants, I thought of teaching one person on his staff the Hungarian algorithm and then including him in the presentation of results. The vice president and three plant managers felt comfortable with the new changes and our recommendations were implemented quickly. Success in that first task led to more difficult assignments. —Satinder Mullick, Engr '65 (PhD)

In a political science graduate seminar at Johns Hopkins, I once challenged the professor on a point, namely, whether building a better social safety net would address problems of economic injustice. The professor, William E. Connolly, nodded. A year or so later, I found that Bill had made that same point in one of his books.

Initially, I felt shame at my mistake. But that feeling turned into admiration for Bill for not putting me in my place. I have seen Bill go toe-to-toe with some of the greatest political thinkers of our time, but he did not punch down at a graduate student. For the past two decades, I have been teaching college students, and I try to emulate Bill Connolly in two respects: to strive for the highest peak in the profession and to show kindness to people along the way. —Nicholas Tampio, A&S '05 (PhD)

Next up: Johns Hopkins recently ranked No. 4 on The Daily Meal's list of best colleges for food, which makes us wonder: What are your JHU food memories? Send responses to jdb@jhu.edu with "Icebreaker" in the subject line. If we print your response, we'll send you a JHU pocket notebook.