Allyson Handley, Ed '75 (MEd), '78 (EdD), had a transformational experience as a doctoral student working at a summer camp, a precursor to today's Center for Talented Youth. Under Lynn Fox, a protégée of psychologist Julian Stanley, Handley conducted research into how young gifted girls approached math versus prose materials. "That experience informed my life's work trying to be sure the pipeline of women and minorities is well-represented in STEM." 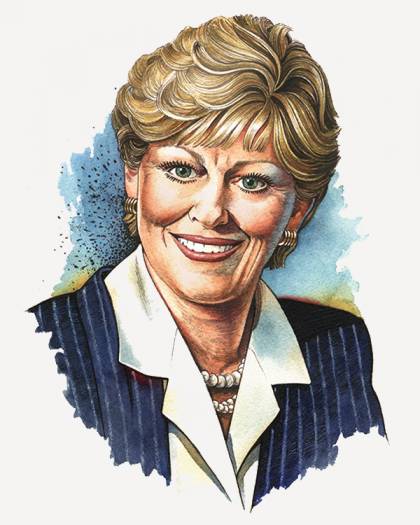 Handley began her career as a high school arts and English teacher. After graduating from Johns Hopkins, she worked in administration and public policy before becoming president of three different higher education institutions. Throughout her career, she has advocated for accessibility and engagement in education, especially among women, minorities, and nontraditional students. At the University of Maine at Augusta—her most recent presidency—she expanded a bachelor's degree with a concentration in architecture to a four-year, accredited architecture degree, making it faster and more cost-effective for students to enter the field. She worked to phase out the associate degree for nursing in favor of a bachelor's degree that would place graduates in higher-paying positions.

Now, as Handley succeeds David Yaffe, A&S '74, as the Alumni Association's new president, she's applying her decades of experience opening doors for students to her new role of fostering engagement among alumni, both digitally and in person. "We have an amazing group of willing and interested alums across the world who have indicated an interest in connecting with the school," she says. "There's tremendous opportunity there that hasn't been tapped yet."

Recently retired from educational consulting, Handley is a self-proclaimed "Scrabble geek" and a volunteer docent and board member at the Oceanside Museum of Art outside San Diego, where she lives. Previously the chair of a lifelong learning task force created by Yaffe, Handley released a report in October that suggests ways to use educational experiences to engage alumni, including a lifelong learning pilot program that could include everything from online courses to alumni book clubs. "Engagement with alumni fosters commitment, and commitment drives generosity," she notes.

Handley was a member of the first cohort to graduate from the School of Education's doctoral program, where, she says, students received unparalleled mentorship and opportunities. They served as professional evaluators with the Department of Education in Washington, D.C., for example, and attended education hearings with professors. She's still paying that support forward today, not only through her commitments to the Alumni Association but also as a mentor to current doctoral student Elizabeth Humberstone. "I had no idea at the time the opportunities that would come to me from what I learned at Hopkins and through its reputation," she says. "I'm very grateful for the relationships I developed, many of which lasted after graduation, and the dedication of the school to leadership development."