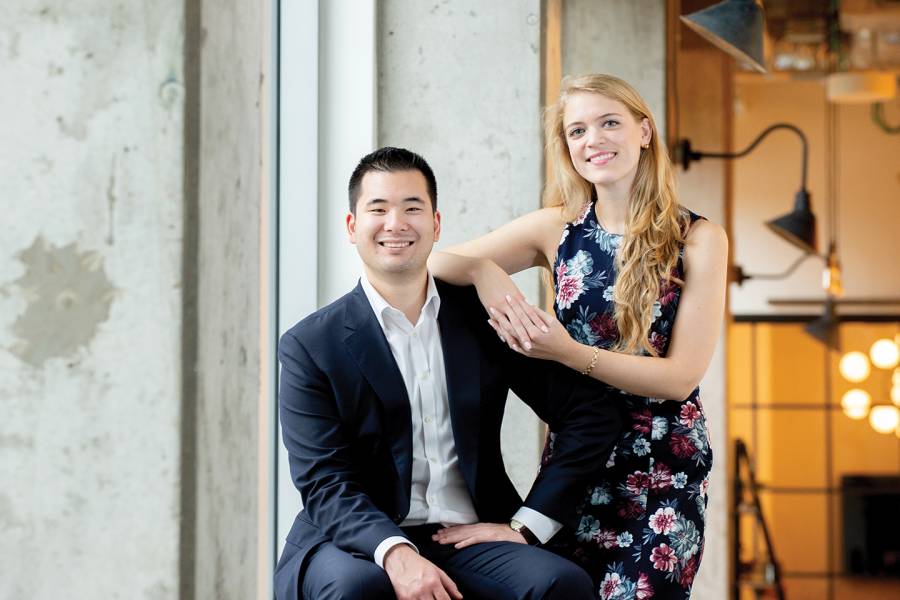 Allysa Dittmar grew terrified as she was wheeled into the operating room for surgery in 2015. Dittmar, who is profoundly deaf, relies on lip reading and sign language to communicate. Her requested sign language interpreter had not arrived. Doctors and nurses were speaking to her, but she could not read their lips or even sense their mood—their faces were obscured by surgical masks. She had asked the anesthesiologist to tap her before he began administering sedative, but he forgot. "It was horrible," Dittmar says. "I didn't feel human."

After she recovered, Dittmar, A&S '14, SPH '17 (MHS), and her partner, Aaron Hsu, A&S '14, SPH '15 (MHS), decided to do something to prevent other deaf and hard of hearing people from having similar experiences. "I felt that we had a moral obligation to do something about it," Hsu says. They interviewed deaf people and health professionals, then worked up a prototype with Johns Hopkins biomedical engineering doctoral candidate Inez Lam. Their product, ClearMask, the first full-face, transparent surgical mask, recently won $25,000 from the Johns Hopkins Social Innovation Lab, an accelerator program that supports startup nonprofits and mission-driven companies.

Why a new surgical mask?

Allysa Dittmar: The more we talked to people, the more we realized the traditional surgical mask is problematic for a lot of patient groups. Children are often really scared when they're hospitalized. For children who are immunocompromised, everyone surrounding them—even their parents—is in surgical masks. Kids get their cues from their parents' reactions, and it's really hard when they can't see their facial expressions. 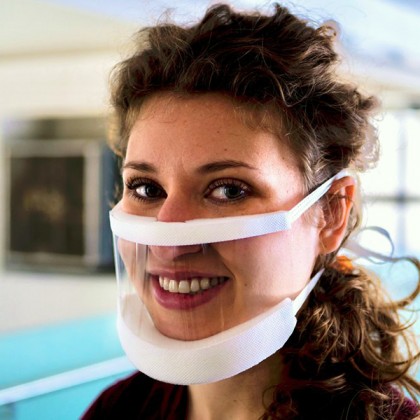 For deaf people, we use facial expressions as part of American Sign Language. Even when an interpreter is in the operating room, they often need to pull down their mask to better communicate.

Aaron Hsu: People who speak English as a second language struggle when they can't read facial expressions, too. I see this with my own parents. As we started researching surgical masks, we realized that they really haven't been updated since they were first invented.

How did you go about designing a new mask?

AH: The first thing we did was look to see if anyone else was working on a clear surgical mask. We found one, but it had some pretty major design flaws. We decided to start from scratch. We threw out every preconceived notion about what a surgical mask should look like. We studied FDA regulations and used those as a starting point. Then we interviewed dozens of surgeons, physicians, and nurses to learn what they liked and didn't like about surgical masks.

Most people think the primary function of the masks is to filter air, but the FDA guidelines state that surgical masks are just supposed to prevent bodily fluids from flying into or out of your mouth and nose.

AD: We tested the mask with dozens of surgeons and other health care workers. We sat down for more than 200 interviews with people at the National Association of the Deaf conference. Health care workers told us they wanted a mask that wouldn't slip and wouldn't fog up, so we created a system to keep the mask in place and used an anti-fog coating.

How did you turn your concept into a company?

AD: At first, we were working 80 hours a week between our regular jobs and ClearMask, but we were starting to burn out. In February, I left my full-time job as a health policy analyst focused on the deaf community for Maryland Governor Larry Hogan to concentrate on the business. We just got into our sixth startup accelerator program. This one is in D.C., so we've been traveling back and forth a lot.

AH: We knew it was important to find the right team—not just people who had the skills but who were a good fit culturally. We've also had some really extraordinary mentors. People genuinely want to help, and that's pushed us so far. We've been surprised by how many people have been willing to give up their time to meet with us and give us advice.

Where do you go from here? What are the next steps for you?

AD: We recently finalized our design and are working with manufacturers to produce the ClearMask, and we hope to get FDA approval in late 2019. Then we can start clinical trials. In the meantime, we're sharing the prototypes with health professionals to get more feedback. We had 126 meetings just in August.

AH: For us, ClearMask isn't just about the product. It's about making medicine more accessible to all people, not just the deaf and hard of hearing. We want to use the platform we have to advocate for better health care for all marginalized groups. 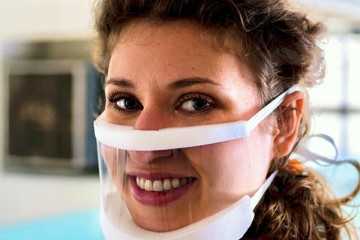