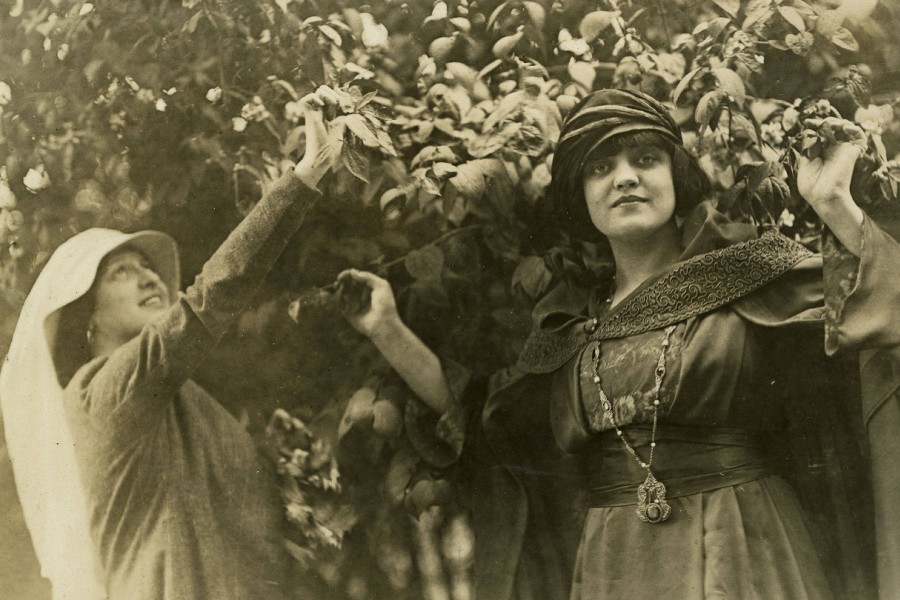 Credit: The Peabody Institute of the Johns Hopkins University

Live fox or fur stole? Claire Weber initially couldn't tell when she was looking at an old photograph of a woman on a boat, returning from Europe. Weber, Peab '15 (MM), is a Peabody Institute vocal coach, and she first came across the photo while doing archival work at the institute's Arthur Friedheim Music Library. In 2015, private donors gifted the library a large, eclectic collection of items once belonging to the glamorous, larger-than-life soprano Rosa Ponselle, perhaps the greatest American opera star you've never heard of. The collection included paintings, porcelain figurines, furniture, costumes, evening wear, a monogrammed silver tea set, sheet music, performance programs, and photographs—including the aforementioned one with the possible fur stole.

In her time, Ponselle "was the diva of divas; everybody knew who she was," says Weber, who admits she didn't know much about Ponselle before working on the collection. Born to Italian immigrants in Meriden, Connecticut, Ponselle performed vaudeville with her older sister until celebrated tenor Enrico Caruso heard her sing during a voice lesson. On Nov. 20, 1918, Ponselle made her Metropolitan Opera debut alongside him. She was 21 years old, and an instant star. Over the next 19 years she performed 23 different roles in 365 performances with the Met before settling in Baltimore in the late 1930s after marrying Carle Jackson, the son of four-term Baltimore mayor Howard Jackson. They built an Italianate mansion north of the city they called Villa Pace, which she kept after they divorced in 1950. Over the next three decades Ponselle was an anchor of Baltimore's opera community, becoming the first artistic director of the Baltimore Opera Company. Peabody awarded her an honorary degree in 1965. She held recitals and benefits at the Villa. And when she died in 1981, the first line of her New York Times obituary called her "indisputably one of the greatest operatic talents this country has ever produced."

That she's a bit lesser known today may be because of the era during which she shot to fame. "She was singing at a time, like Caruso, when recording was just starting to get figured out," Weber says. "So when you listen to those recordings [now], it's clear that her sound was this dramatic soprano, but you hear an almost tinny voice. I think that she was famous at a time when we couldn't quite capture how great she was, which is why I think she's been sort of forgotten."

The sad saga of Rosa Ponselle

Matthew Testa, Friedheim Library archivist, says that while the library already had some Ponselle material, the collection—donated in 2015 by the Lester Dequaine/Frank Chiarenza Foundation—added a wide variety of objects the library typically doesn't archive. "We don't collect many costume gowns," Testa says, adding that these objects were given with the donors' understanding that they would become part of a bigger display. Earlier this year, the library opened Force of Destiny: The Rosa Ponselle Collection at Peabody, a combination online and library exhibition using the archive's materials to tell Ponselle's story. Located in the back of the Friedheim Library, the exhibition includes a number of paintings, porcelain figurines of characters she played, an elegant brocade dress, and the silver candelabras that are so elegantly shiny they probably made Liberace jealous. It also includes a 1939 Baldwin piano, which Weber used on days she conducted her Italian diction class in the compact room.

Over the nearly two years Weber spent working with the collection, digitizing some 1,400 items, she read through press clippings, programs, and books about Ponselle, learning the diva's approach to singing. "She used to talk about how the best technique that a soprano can have is to pretend you're weeping so that the air comes down the front of the nose and you really get to your nasal resonance," Weber says, adding that Ponselle also sang with an amazing amount of conviction and attention to a libretto's text. "Dramatic voices these days tend to focus more on the sound of the voice and the music itself, which is important, but the text tends to get a little bit garbled. [When Ponselle sings] you hear every word crystal clear, and it's not like she's overdoing the diction. She's singing the text. That's something that I'm working on with [students]." 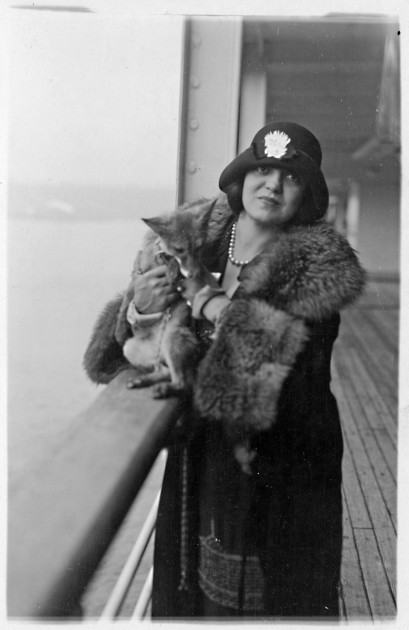 Image caption: Photograph of Rosa Ponselle in a hat and cloak with a fox cub on board the S.S. Rex. Note on back reads, "Rosa Ponselle and the fox cub she picked up on Puccini's estate," and is stamped "Photo by Bain News Service."

Image credit: The Peabody Institute of the Johns Hopkins University

Weber also learned about the many pets Ponselle kept while working on the collection. "She was obsessed with animals," Weber says, adding that she came across stories of people coming over to Villa Pace for an interview or vocal lesson, and Ponselle would come "sweeping down the stairs following a huge stampede of dogs." At one point, Ponselle owned 19 poodles, some squirrels, and, well, a fox.

Ponselle visited Giacomo Puccini, composer of La Bohème, Tosca, and Madame Butterfly, in Italy shortly before he died, and she came across a little fox on his estate. In one photo, she's standing on a ship holding the fox, and "at first glance you think, Oh, it's a fox stole," Weber says. "But if you look closely, it's sitting up and it's got a little leash and collar on."

Weber laughs when thinking about Ponselle's menagerie. "She sounds like such a fascinating character," she says. "I wish, in the exhibition, there was some way to convey that there were usually dogs running around. That's the one thing I wish that we could do."