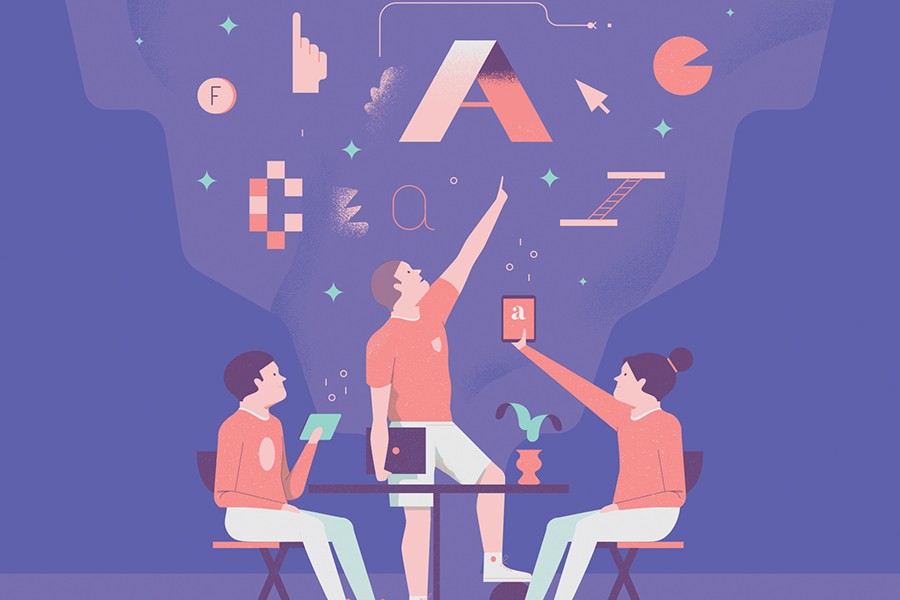 Roughly half of all third-graders in Brazilian public schools fall short of the country's reading standards. That statistic inspired Brazilian entrepreneur and School of Education doctoral student Americo Amorim to develop a literacy game app to get kids reading sooner by teaching them rhyming, alliteration, and phonemes.

According to Amorim, the app, called Escribo, is groundbreaking for Brazil: It is believed to be the country's first evidence-based educational program and the only interactive program aligned with the new Brazilian Common Core standards, which go into effect in 2020. It's also designed to provide teachers with analytics on students' progress so they can tailor the games to suit individual needs. Amorim says that customizing the app is as easy as "editing a PowerPoint slide."

Amorim has experience applying technology to education: His previous startup, Daccord Music Software, created music education apps—including guitar, keyboard, drums, and flute—for digital publishers. While working with such clients, he came up with the idea to launch Escribo, and in 2015, he enrolled in the doctoral program at the Johns Hopkins University School of Education to learn the best teaching and research practices.

He surveyed existing educational apps and concluded that those which conveyed the most information were boring to use, while the "edutainment" games were fun but not effective teaching tools. In contrast, Escribo combines proven instructional practices—such as developing phonemic awareness in small groups—with gaming techniques to hook students into playing.

In the Brazilian state of Pernambuco, Amorim teamed up with FACEPE, a science and technology foundation, and Faculdade Pernambucana de Saúde, a local college, which provided 15 research assistants for a pilot program. Among 749 children in 17 schools, students who used Escribo advanced 68 percent more in the reading assessment than the students in control classrooms who didn't play. In the writing assessment, Escribo-playing classes advanced 48 percent more than their nonplaying peers. The teachers observed that in 93 percent of the Escribo-based instructional sessions, the students improved their phonological awareness and other reading and writing skills. With those results and teacher feedback, Amorim's team is improving lesson plans, as well as following up with the same students to see how well they're performing three months after the experiment.

Image caption: Screenshot of one of the six literacy games in the Escribo app

Amorim envisions Escribo as a tool for teachers, not as a replacement for traditional pedagogy. "A productive technology-enhanced class usually starts with the teacher explaining the skill that the students need to master," he says. Only after demonstrating exercises using a whiteboard or movable alphabet does the teacher present the kids with the app on a tablet, which they use in pairs. "This approach is based on findings from previous research which indicate that small groups of students working together achieve more than [students] working alone or in large groups," Amorim says.

Teachers can track the progress and identify which students require special attention and which ones are ahead of the learning curve. Parents can also receive push notifications when their children hit certain milestones. Amorim says that the data Escribo collects fill a gap in early-learning testing, "as [Brazilian] schools do not develop traditional assessments for small children."

Amorim has released a free Portuguese-language version of Escribo Play with six games for both Android and iOS, and he plans to have them translated into Spanish soon, expanding the app's reach within Brazil and throughout Latin America. He's also interested in exploring how effective the games would be in U.S. preschools, where he hopes to have as much of an impact on teachers as on students. He recalls a Brazilian teacher telling him that she cried at one of the final Escribo sessions when she saw her 4-year-old students reading. "She didn't imagine they were capable of doing that," he says.