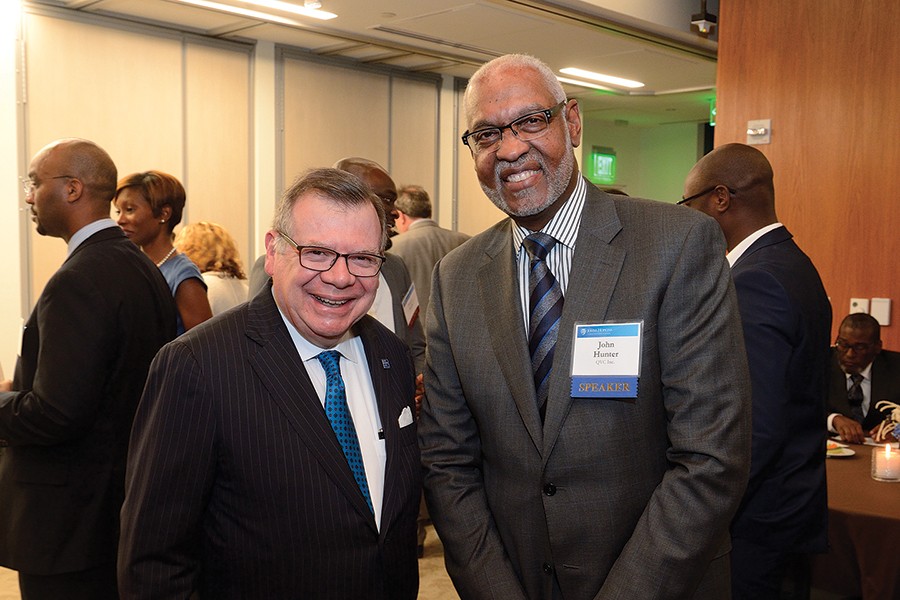 One Saturday afternoon in the early 1990s, John Hunter, then a senior vice president for Citibank, volunteered to speak with students in Johns Hopkins' nascent Leadership Development Program for Minority Managers.

"Students were asking questions like, 'What do I say if I bump into the company president in the hall and he says hello?'" Hunter recalls. "At first I thought, 'Wow, that's kind of a mundane question.' But then I realized the seriousness of the situation—if they were asking me questions this simple, what else didn't they know?"

From that epiphany through the LDP's closure in 2013, Hunter served as one of its most vocal champions. In partnership with Carey Business School Dean Bernard "Bernie" Ferrari, Hunter helped develop Carey's new Leading a Diverse Society Initiative, which launched in October 2017 at an event attended by more than 100 guests, many of them LDP alumni.

"We believe that a diverse school is positioned best to lead a diverse society. Carey aspires to be a school community that truly embodies the values and characteristics of a global society," Ferrari said at the event.

"Underrepresented minorities have to have a place at the table, not only to be part of the changes that will advance our society but to lead them."
John Hunter
Dean's Advisory Councilmember

"This new initiative is largely John's conception," says James Calvin, a Carey professor who directed the LDP from 2000 to 2013. "Dean Ferrari asked him to help develop an idea, and John sought my input, but the big plan that is now being executed came from John Hunter."

The Leading a Diverse Society Initiative, Calvin says, isn't a recreation of the LDP, which was a nine-month certificate program for minority professionals in the Greater Baltimore–Washington area. The new initiative will draw from the expertise, professional connections, and financial support of its predecessor's successful alumni to provide enrichment opportunities for underrepresented minority students, supplementing their Carey degree programs.

Hunter, a member of the Dean's Advisory Council at Carey, has long devoted all three of those resources to Johns Hopkins business students. He and his wife have made gifts to support student financial aid, including the establishment of the John and Dolores Hunter Family Scholarship. But in laying the foundation for the Leading a Diverse Society Initiative, Hunter needed to encourage many others, particularly LDP alumni, to do the same thing. He identified a core of former students, several of whom have gone on to become leaders in global board rooms and all levels of government, and reached out to gauge their interest in recruiting students, serving as mentors, and making gifts. "The response has been amazing. They've been asking, 'What's the strategy? How will this work? What can I do?'" Hunter says.

Tina Wilson, Bus '98 (Cert), '03 (MBA), is one of the alumni who have made a gift to, or committed to volunteer for, the Leading a Diverse Society Initiative. Wilson credits LDP with helping her transition to civilian professional life after a decorated career in the U.S. Air Force, and the program's lessons seemed especially valuable four years ago, when she was laid off from her job. "I decided to start my own company, and I attribute a lot of that decision to the LDP, which taught me your journey is your journey. Nobody can walk in your shoes—but you have to believe that you can," Wilson says. Her company, T47 International, provides intelligence, operational support, and environmental services to government and private-sector clients.

When Wilson learned about the Leading a Diverse Society Initiative, she knew she wanted to make a gift. "To be a meaningful part of discussions about inclusion in business moving forward, you need to provide the next generation some means of financial support," Wilson says, adding that her own undergraduate and graduate degrees were made possible because of the GI Bill. "If there's an avenue that can assist someone who doesn't have the means to attend Hopkins, let's make it happen."

The group has already exceeded its $450,000 fundraising goal for scholarships to be given during the new initiative's first three years. Some of those scholarships have been awarded, attracting five students to Carey's flagship full-time MBA program who are expected to matriculate in the fall. Spring marked the start of the initiative's mentorship program, which has matched 13 students to date. Mentors come largely from the LDP alumni ranks but also include Johns Hopkins Chief Diversity Officer Fenimore Fisher and, of course, Hunter.

"Underrepresented minorities have to have a place at the table, not only to be part of the changes that will advance our society but to lead them," Hunter says. "It's important that Johns Hopkins, which has a gravitas in higher education, can produce these kinds of leaders for the world's businesses."