They persisted, and endured 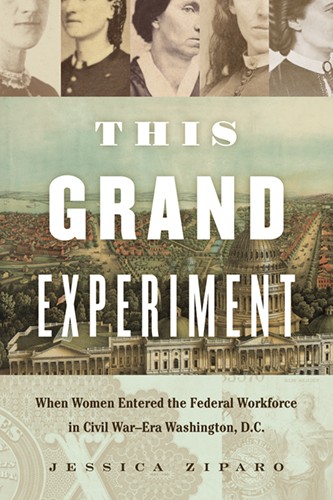 Sarah Wainwright needed to make more money in 1864. The middle-aged Civil War widow had three kids to take care of, and while her job in the federal government's War Department helped, she also knew Quartermaster General Montgomery Meigs needed a woman to oversee the female copyists after he segregated them from the men in the office. None of the female copyists was willing to take on a supervisory role for the $600-a-year salary all women were paid. Wainwright said she would, provided she got paid as a first-class clerk—$1,200 a year. Secretary of War Edwin Stanton OK'd Meigs' request to promote her, five years before Congress approved permitting women to occupy the grade of clerk in federal office. And so beginning in 1865, the Federal Register of Employees noted this first woman to become a clerk in its pages by listing her, ambiguously, as "S. F. Wainwright."

Wainwright's is one of the many stories uncovered by historian Jessica Ziparo in This Grand Experiment (University of North Carolina Press), an engrossing exploration of an era when women first entered the federal workforce in large numbers. Ziparo, A&S '12 (PhD), notes that in 1859 only 18 women's names appeared in the biennial Register of All Officers and Agents, Civil, Military, and Naval, in the Service of the United States, and they all worked in the Government Hospital for the Insane. The 1871 edition of the Register listed more than 900 women, an increase of more than 5,000 percent, and that publication didn't include the hundreds of women working in the Government Printing Office or the Treasury Department's Bureau of Engraving and Printing.

These women helped power the Union's Civil War effort, such as supporting the bureaucratic work that created a national currency and paid pensions to soldiers and their families. These women also endured the kind of gender discrimination, media intrusion into their private lives, and lesser pay that, unconscionably, wouldn't surprise working women today. What Ziparo provides with this readable deep dive is a necessary chapter of U.S. labor history, and yet another reminder that workplace conditions don't change without solidarity across race, gender, and class.