Meeting of the medical minds 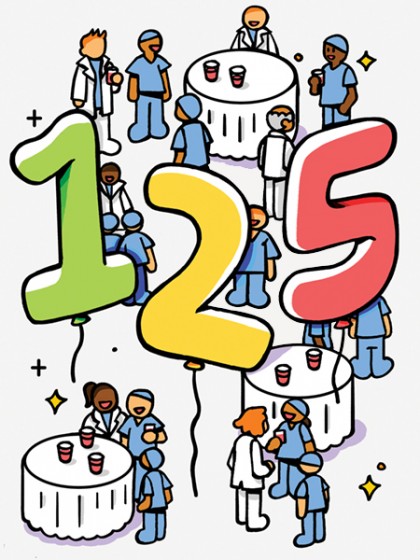 Holding the Johns Hopkins School of Medicine reunion every other year instead of annually has its flaws. "It's a little like celebrating your wedding anniversary a month early or a month late," says John T. Thompson, A&S '77, Med '80 (MD), HS '86, president of the Johns Hopkins Medical and Surgical Association. In other words, half the graduating classes have to celebrate their reunion in an off-year—celebrating 10 years when really it's been 11, or 20 when it's been 21.

In 2018, the School of Medicine will mark its 125th anniversary with special events honoring the institution's history and ongoing achievements. Most notably, the school will shift to hosting annual reunions. (The June 1–2 event will honor alumni whose graduation years end in 3 or 8.)

For many, graduating from medical school marks the achievement of a lifelong goal, Thompson says. "Hopkins made meeting that goal possible, and [reunion] gives us the opportunity to take time to honor the institution and reflect on that formative time in our lives." Among the other anniversary celebrations: a pop-up museum exhibition, an online gallery of 125 Hopkins Heroes from the school, and the naming of the School of Medicine boardroom in honor of Mary Elizabeth Garrett, founding benefactor of the medical school.

The decision to host annual reunions is part of an expanded strategy of alumni engagement at the school, one that connects graduates not only with their classmates but with the school and its current students, says Robin Ingram, senior director of Alumni Relations at the School of Medicine. "Our alumni are vital ambassadors for Hopkins, and we value the pride they have in their Hopkins experience," Ingram says. The School of Medicine recently launched an endowed scholarship fundraising campaign to attract and support exceptional students. It's also connecting alumni with students to provide advice and support.

The school established programs such as HOST—Help Our Students Travel—which defrays some travel costs for fourth-year students trekking to residency interviews by placing them with alumni hosts. Two dinner series for alumni and students—Dine with a Doc for medical students and Molecules and a Meal for PhD candidates—have also been very popular and will expand in 2018.

Ashley L. Cook, a PhD candidate in the Graduate Training Program in Cellular and Molecular Medicine, attended Molecules and a Meal last year. She enjoyed the chance to mingle with alumni at varying stages of their careers. "Alumni have been where current students are and have insight into what is to come," Cook says. "They're a huge knowledge resource—and they have great memories to share about their time in graduate school."

For more information, go to hopkinsmedicine.org/som/alumni.