Back on the field 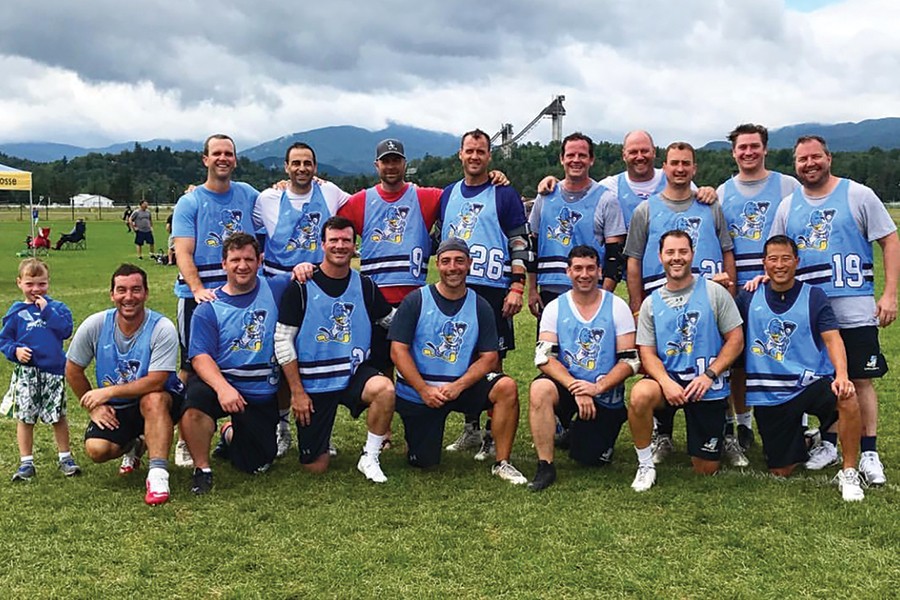 Image caption: It's been a few years since their undergrad days, but the Black and Blue Jays still take a heck of a team photo.

When former Johns Hopkins defenseman Jordan Jayson, A&S '99, moved back to upstate New York a decade ago, he rediscovered the Lake Placid Summit Classic. The annual summer lacrosse tournament's 30-and-over division included a team of Syracuse alumni and another of former Cornell players. "All these different teams were having a lot of fun coming here, continuing to build those relationships," Jayson recalls. He thought to himself, "Well, why doesn't Johns Hopkins have one of these?"

"[W]hen it came down to putting the equipment on, everybody was really competitive and played as hard as they possibly could."
Jordan Jayson

So Jayson got to work, contacting some old teammates to form the Black and Blue Jays, a team that competes in Lake Placid every August and features a lineup of late 1990s and early 2000s Hopkins All-Americans, including attackman (and JHU assistant men's coach) Bobby Benson, A&S '03; midfielder A.J. Haugen, A&S '00; defenseman John Gagliardi, A&S '97; defenseman Shawn Nadelen, A&S '01; and goalie Brian Carcaterra, A&S '00. "I had low expectations for myself in terms of performance," says Carcaterra, who joined the Black and Blue Jays for the first time this year. "We're all well past our prime. Shockingly, I think when it came down to putting the equipment on, everybody was really competitive and played as hard as they possibly could."

As much as the alums look forward to getting back on the field, the real draw is the chance to see old friends. They get a preview of what's to come with an email chain Jayson helps maintain throughout the year. "The banter is really a lot of fun," Nadelen says. "It's like being back in the locker room." The guys bring their families along too, so the event has become an annual reunion weekend. There are activities for the participants' children, and while there is one game on each of the four days, there's plenty of time to unwind afterward. "This was so unique," Carcaterra says. "The kids got to play, the wives got a chance to talk with the other wives, and the guys got to talk about the old days."

Jayson wants to expand the Hopkins presence in Lake Placid in the years to come, adding to the already sizable contingent of Black and Blue Jays and starting a 40-and-over team. "We've recruited some younger players over the last couple of years, and they've picked up the ball and are starting to run with it," Jayson says. "I hope what will occur is that as we approach our 40s, we hand off the 30-and-older team to someone in the next generation."