Ten years ago, Navajo mom Charmayne Wilson, then 19 years old, lived in a tiny log home with her 3-month-old son on the outskirts of Chinle, a predominantly Navajo community in northeast Arizona. Originally built as a temporary structure for tribal ceremonies, the house had dirt floors, no drywall, and no running water or electricity. Wilson did not own a car, and the nearest grocery store was 15 miles away. Unemployed and unmarried (the father of her baby lived nearby, visiting occasionally), she had dropped out of high school when she got pregnant. 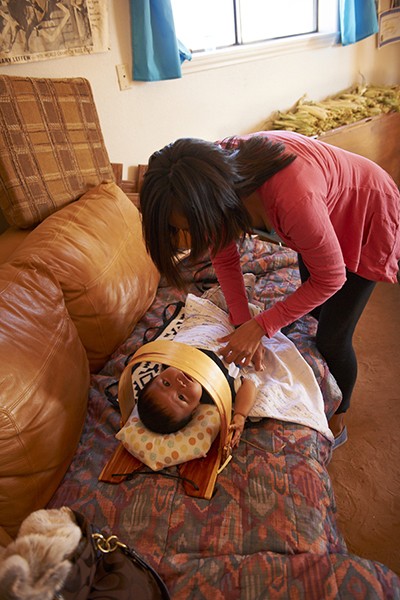 Image caption: "There is a thirst for some connection to the culture, and the ways our ancestors and people have always thought," says Crystal Kee.

"She felt hopeless. She felt anger," recalls Crystal Kee, also Navajo, who met Wilson while working as a home visitor for the Family Spirit program of the Johns Hopkins Center for American Indian Health. When measured against the general U.S. population, young American Indian mothers and their babies often face a constellation of challenges and risks endemic to poverty, including higher rates of infant obesity and teen pregnancy. Family Spirit, launched in 1995 with grants from the childhood nutrition nonprofit Share Our Strength, promotes well-being among teen mothers and their babies. The program delivers a 63-part curriculum—starting midway through a mother's second trimester and running until her child's third birthday—taught in the home by Native peers, many of whom benefited from the program themselves as teen moms. "The range of material goes from child development and parenting to diapering one's baby and feeding, all the way out to budgeting, career planning, conflict resolution, and communication with one's partner," explains Allison Barlow, the center's director.

Family Spirit's home visitors undergo training from the Center for American Indian Health and are then hired out to tribal, state, and federal agencies, including the Indian Health Service. "The [home visitors] are the liaisons between families and systems," notes Kee, who now coordinates Family Spirit's implementation through the program's various partners. "They go into people's homes and see how they live; they see the challenges and barriers that prevent families from being successful." To date, Family Spirit has served an estimated 10,000 families and trained approximately 500 home visitors in more than 100 tribal communities west of the Mississippi River.

Backed by data from three randomized controlled trials, Barlow says Family Spirit has boosted parenting knowledge and involvement, increased home safety, and lowered rates of maternal depression and substance abuse. "Most important—and this is where the rubber hits the road—are the positive child outcomes," she says. "We see improved social and emotional behavior development from age 1 to age 3." That, in turn, indicates the likelihood of better school readiness and lower substance use later in life.

Family Spirit recently inaugurated several initiatives, including partnering with an existing program that allows families in Chinle to use vouchers to buy fruits and vegetables at local farmers markets and grocery stores; introducing what it calls Family Spirit Nurture to reduce obesity in three tribal communities; and delivering fresh water to families in a New Mexico community as part of a study to see how it affects consumption of sugar-sweetened drinks by infants 6 to 9 months old and their mothers. And the center recently launched the Mother-Daughter Project to confront teen pregnancy, an issue that has been a tough sell for Native populations, whose numbers were reduced significantly over time by "trauma and genocide," Barlow says. Tribal leaders recognize that the most effective way to eliminate economic and health disparities is through education, and they are increasingly supportive of the idea that teens postpone starting a family in favor of completing school. "We're working with moms and their daughters who are 8 to 11 years old to build a curriculum to delay initiation of risky sex and alcohol and drugs, helping moms wait to have kids until they're ready," Barlow says.

For her part, Charmayne Wilson emerged from Family Spirit with what Kee terms "a greater purpose in life." She completed high school and took a job providing child care for the staff at a local hospital, supplemented by a second job at a convenience store. With that income, she was able to upgrade her home with new walls and floors. She separated from the father of her son—with whom, by then, she had had a daughter—and later married a man who has embraced her two kids. Together, the couple purchased a truck, affording the family easier access to food, and they're planning to build a new house.

"Success" for American Indians, Kee stresses, is different from the conventional Western ideal of a robust salary and a diploma from a prestigious school. "Success is really defined by our kids," she explains. "Charmayne's two children are both very healthy and happy. She is truly invested in creating the best future that she can for them. Inside her house, you see learning posters all over the walls. As she told me, 'It's not just for my children to be successful but also for the generations thereafter. We have hope that every generation after us is going to have a better life than we've ever had.' I feel that Charmayne is really on the path to making that happen." 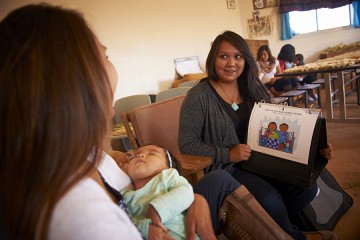