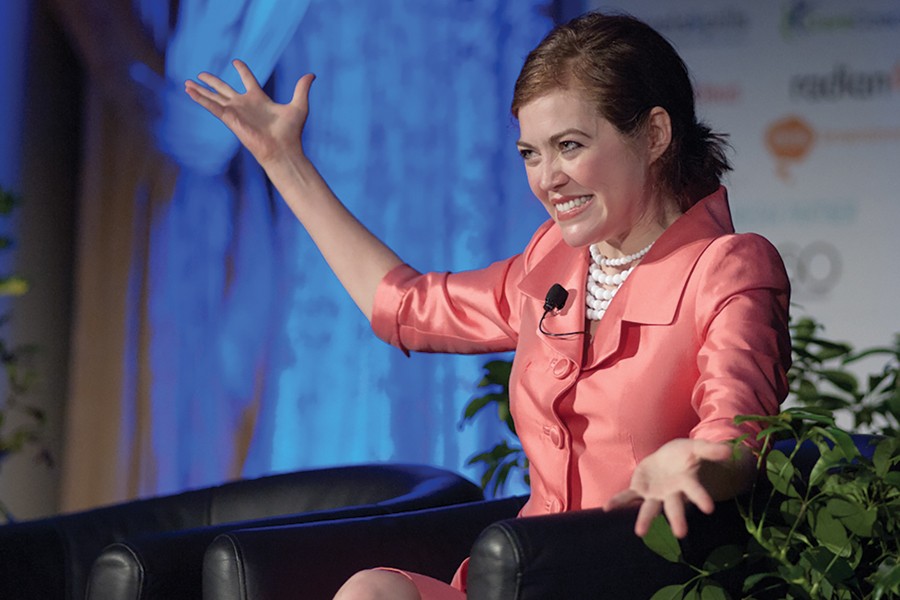 Record producer Phil Spector famously created pop music's "Wall of Sound" by layering tracks of drums over strings over vocals over harps, French horns, or whatever else occurred to him, then running it all through an echo chamber. The aural sensation—prominent in the Ronettes' "Be My Baby" and the Beatles' "Let It Be," among many other hits—was a new thrill when it first came out of a radio in the 1960s. Charity Tillemann-Dick, Peab '06, alludes to the concept when describing a similar thrill generated by a human voice so robust and vibrant that "a single voice [saturates] the room in its natural form."

"The experience of making that sound is completely intoxicating," says Tillemann-Dick from her Capitol Hill home. "I got my first hit of it at a very young age and I wanted more." And from the tragic to the miraculous to the inexplicable, "more" is what Tillemann-Dick has gotten since she sang her first opera at age 5 in her hometown of Denver. The 34-year-old soprano/composer recounts her story in The Encore: A Memoir in Three Acts, published in October by Atria Books/Simon & Schuster. Presented as an opera, her tale has as a villain the idiopathic pulmonary hypertension—potentially fatal high blood pressure in the arteries of the lungs—that Tillemann-Dick was diagnosed with in 2004. Her doctor told her, "Those high notes are going to kill you," Tillemann-Dick said in a 2010 TED Talk. "While she didn't have any medical evidence to back up her claim that there was a relationship between operatic arias and pulmonary hypertension, she was absolutely emphatic that I was singing my own obituary."

Today, after a double-lung transplant in 2009, a monthlong medically induced coma, a second double-lung transplant in 2012 after her body rejected the organs, and salivary cancer, the Fulbright alumna is once again onstage in symphony halls and performing arts centers around the world while advocating for organ donations. The path back was long and arduous. "Relearning how to breathe was the most grueling experience I've ever been through," she says. "It's terrifying, because it feels like you're drowning. Midway through my recovery, an old director reminded me of the breathing techniques I had learned when I was training to be a singer. After that, it was just a process of building up the muscle in my lower abdomen and glutes."

One of Tillemann-Dick's first post-op performances was for the staff at the Cleveland Clinic where her transplants took place, filling the hospital corridors with Gershwin's "Someone to Watch Over Me." She has sung for fellow respiratory patients (wary of germs, she sometimes entertains via social media) and in 2014 scored a No. 1 album on Billboard's traditional classical charts with American Grace.

Home-schooled and singing in public since she joined a choir at age 3, Tillemann-Dick entered college at 14 and earned an undergraduate degree in politics and economics from Regis University in downtown Denver. After studying in Peabody's Voice Department, she attended the Ferenc Liszt Academy of Music in Budapest, Hungary, and has performed at the Kennedy Center in Washington, D.C., the Tel Aviv Opera House in Israel, and the American Embassy in Beijing, to name a few.

Throughout the book, Tillemann-Dick discusses the deepening of her religious beliefs after her diagnosis at age 20 and unlikely recovery. "I was changed" by the ordeal, says Tillemann-Dick, a devout Mormon and one of 11 siblings. She says she "came to know the beauty and good of so many people with different belief structures, people I might have judged" before her life was in the balance.

In "Act Three" of her memoir, in which a second set of lungs is sought to replace the first transplant her body rejected, Tillemann-Dick writes: "The older I got, the more I realized that my entire life was a series of things that—to an outside observer—made absolutely no sense. My faith. My career. My [Jewish] boyfriend"—Yonatan Doron, her husband since 2011. "But life isn't lived through observation. You don't perform by sitting in the audience."

The Tillemann-Dick opera is one in which the curtain goes back up after the final act, not for thank you's or bows but for the next installment of the story. For the diva has promised, "I'm not done yet."