Through their startup, GiveCampus, two Hopkins alums have helped more than 400 K-12 schools, colleges, and universities raise more than $100 million 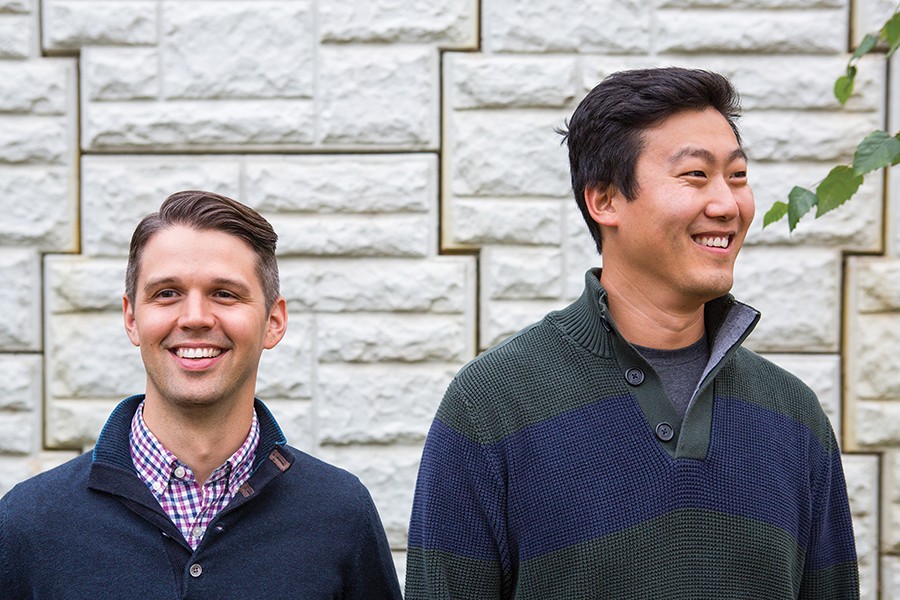 Michael Kong, Engr '05, and Kestrel Linder, A&S '05, will tell you that their fellow millennials are a generous generation: nearly nine out of 10 people in their 20s and 30s give money to causes, according to the Millennial Impact Project, which collects and analyzes data on how the age group gets involved in issues they care about. But they'll also tell you that donating to their alma maters is another story: Just one in 12 millennials contributes to their college or university.

The two friends reasoned it was because schools weren't doing a good enough job in reaching young adults where they hang out most: online. So in 2015, Kong, a former engineer at Facebook, and Linder, a former government consultant, established GiveCampus, a website and software platform that helps schools crowdsource funds for scholarships, academic programs, student activities, athletics, and more. GiveCampus hopes to convince cash-strapped recent graduates that the aggregated effect of their $5 or $10 gifts is as great as a single big check written by a well-heeled donor. And Linder and Kong seem onto something: To date, the company has helped more than 400 K-12 schools, colleges, and universities—including Johns Hopkins—raise more than $100 million.

How did you guys come up with the idea for GiveCampus?

Michael Kong: We'd often see each other at weddings or reunions or just hanging out, and it kept coming up that we didn't give back to Johns Hopkins and we couldn't really figure out why. At the time, Kickstarter was blowing up. We thought: Why wasn't there a similar transparent, engaging, and convenient way for donors to give to colleges and universities?

What did schools think of the concept?

Kestrel Linder: When we launched a prototype, the reaction was universally positive, but nobody wanted to be the first to try it. Universities are not risk-takers, and they are not early adopters. We managed to find five schools in spring 2015 that were willing to take a leap of faith, and they had extraordinarily strong results with the technology. Once we had real results, it became substantially easier, and we grew from five schools to more than 40 by the end of that year.

Wow, your sales team must have been busy.

KL: Many people think we're crazy for this, but we don't invest in a lot of cold-call sales. The business grows almost entirely from referrals. We're taking a gamble that if we do really well for our partner schools, those schools will help us grow the business. More than two and a half years in, it's been working really well.

You require every school to include a video about its campaign and provide a detailed description of where the money will go. Why?

KL: One of the reasons young people don't donate to schools is that there's a perception that the school may be worthy of support but not needy of support. But it's really about how the institution tells its story of being worthy and needy. It's hard for a school to explain the impact a small donation has, so we show in real time on the GiveCampus webpage for each school how your $10 gift is adding up to tens or hundreds of thousands of dollars.

And you get donors to use social media to help recruit more donors, right?

MK: I had a lot of that social Kool-Aid running through my veins from Facebook. Younger alums might only have five bucks to give, but they could spend a couple of minutes rallying friends and their online communities. With educational institutions, that community already exists, so all you really have to do is activate them.

So how do you guys make money?

KL: We offer a suite of fundraising tools, and we charge a subscription fee that varies depending on the size of school, alumni population, and type of fundraising they're doing. Part of the reason we've been able to grow so fast is that our pricing structure works for schools of every shape and size. We want GiveCampus to be the digital fundraising tool for every educational institution in the world. That's the goal. And I say that with a straight face.

Mike, did Kestrel really say that with a straight face?

MK: He did! Building software that only the top 1 percent of schools can afford sucks. That's not how it should work. When we started GiveCampus, we believed it wasn't just a good business opportunity but also an opportunity to address one of society's most urgent needs: affordable education. If we succeed as a company, it will be because we've accomplished our mission of helping schools advance the quality, the affordability, the accessibility of education.

Schools can sign up to raise money for just about anything. Any particularly memorable ones?

KL: One of the campaigns we are most proud of was at Baltimore City College, a public high school in Baltimore. One of their social studies teachers wanted to raise money to renovate a decrepit library, and they were $100,000 short. The school put this grassroots campaign together and raised the money in around two months, largely in $50 or $100 or $200 increments.

Why is it important for institutions to reach young donors?

KL: If they don't engage people in their 20s and 30s and get them in the habit of giving, when those people are older and have the means to give larger gifts, they won't wake up at 50 and say, "I'm going to start writing big checks to Johns Hopkins."