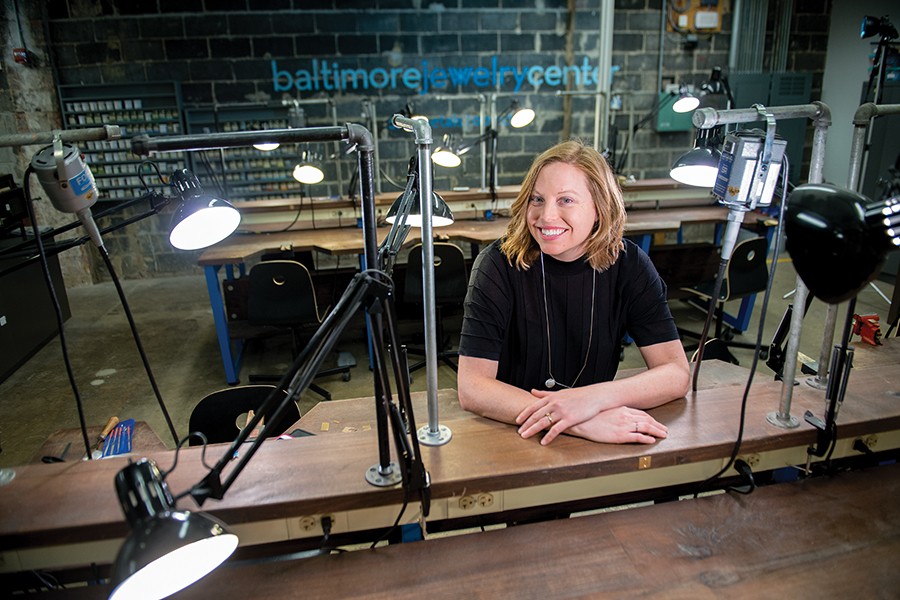 Bottles of brightly colored powdered enamels with names such as "Bitter Green," "Rite Purple," and "Turquoise Horizon" line the wall at the Baltimore Jewelry Center. A few feet away, students and artists bend over soldering torches, tabletop kilns, and massive anvils, shaping delicate and extraordinary works of art.

Director Shane Prada, Ed '06 (MAT), floats through the studio, checking in on the artists and their work. The 35-year-old grew up on a farm in Mississippi and moved to Baltimore in 2004 to participate in Teach for America. After helping to open a charter school in Baltimore, Prada learned how to make art jewelry—works of unique and provocative art that are usually, but not always, meant to be worn—at the Jewelry Center at the Maryland Institute College of Art. When MICA announced in fall 2012 it was discontinuing the program, Prada led a group of faculty and students to create a new program, acquire nonprofit status, and find a permanent space in the city's Station North Arts and Entertainment District. Now she helps plan the center's classes and programs, raise and manage funds, organize collaborations with businesses and other nonprofits, and chart the nonprofit's path to continued sustainability.

What drew you to jewelry making?

After I had been teaching for five or six years, I wanted to do something a little different. I'm originally from rural Mississippi, and we grew our own food and raised animals. My dad was a carpenter. So I learned early on that to make something with my hands was powerful. I started taking a jewelry course and loved it. Jewelry is a natural vessel for narratives. Everyone has jewelry, and each piece almost always has a story with it. When you're talking about art jewelry, there are two levels of narrative: how it was made and what it means.

How did you get involved in the jewelry center?

I was poised to invest more time in taking classes when MICA announced they were canceling the program. Everyone wanted it to continue, even MICA, but it just wasn't financially sustainable. A leadership committee was established, and they asked me to be part of it. I was hungry for something to catapult me into the next phase of my professional life, so I was eager to sign on.

How did you stabilize the center and move to the new space?

You look at a random object and think, "How can I make something beautiful out of that?"
Shane Prada
Director, Baltimore Jewelry Center

We connected with a few lawyers who volunteered to help us apply for nonprofit status. Then we needed to figure out the location because our headquarters, in addition to needing major renovations, was in a flood plain. We launched a capital campaign and started looking into the historic Centre Theatre in Baltimore, which was being redeveloped. The developer really wanted an art center or maker-space in the building. It was a space where we were wanted. MICA was really generous and donated all the old equipment. We already had a student base—the program wasn't closing for lack of students—so with our nonprofit status, a location, and students, we turned to foundations for seed money.

How did you come up with a plan to make the jewelry center financially stable?

We visited other community art organizations and asked what worked well for them and what they would have done differently. We decided on a couple of different major revenue streams: classes and studio access for artists. Once artists have some experience, they can come in and use the studio space. Some come in for an hour or so a week; others rent a dedicated space. We also have a small retail program and an exhibitions program, which has a big educational component. We write grants for specific programs. We are working on moving away from being reliant on support from foundations to forming relationships with donors, private sponsors, and businesses.

Were there any big setbacks along the way?

In May 2014, a month before we officially opened, there was a really bad flood in our old space. We were fortunate that we only lost a small amount of equipment, but we had to close for two weeks to fix the floor. It was devastating, but it helped galvanize people for the move to the new location. We had just signed the lease agreement, but we weren't moving for another 13 months. There were many reasons for the move, but having one that was so solidly pragmatic helped everyone realize it was the right choice.

What are your plans for the future of the Baltimore Jewelry Center?

We're adding classes for kids and teens. We're also starting an artist residency program, which will both enrich our community and support artists. We're looking to partner with some undergraduate programs to offer classes specifically tailored to their students. We'd also like to work with other arts institutions to make what we're doing accessible to more people.

Is there a moment that you would say really sums up the spirit of this place?

About four weeks before the opening in the new space, we were scrambling to get everything done. Two students stopped by for an informal tour and they started picking up weird things from the floor, detritus left by contractors, pieces of metal and wire, and they were saying, "I can't wait to come back to the studio and make something with this."

That approach of looking at things and thinking about how to make them into something engaging and interesting, not overlooking things—I think this medium and this space lend themselves to that. You look at a random object and think, "How can I make something beautiful out of that?"