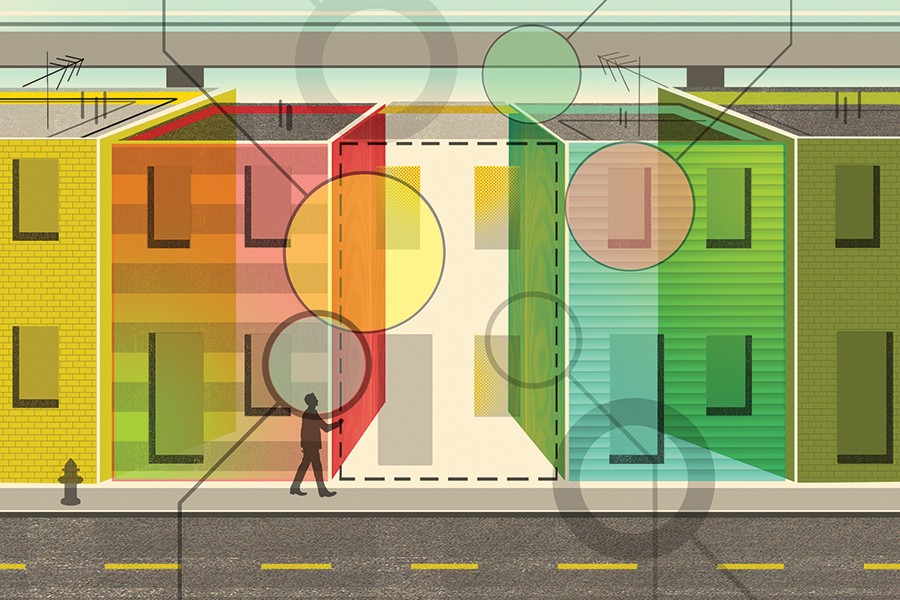 Officials from Baltimore Housing's Code Enforcement Division keep track of the city's roughly 16,000 abandoned buildings—those deemed too unsafe to live in—but progress has been slow in tearing down those properties. Resources are limited, and demolition is expensive. It's cheaper to intervene before they deteriorate to that point by finding new tenants who will take responsibility for upkeep. The biggest challenge? Locating those estimated 30,000 vacant yet habitable properties before they become hazardous, attract crime, and lower property values.

Baltimore Housing acting Commissioner Michael Braverman, A&S '81, turned for help to Johns Hopkins researchers Tamás Budavári, an applied math professor, and Philip Garboden, a doctoral student in sociology and applied math. Could they develop a statistical tool to help city officials more quickly and accurately identify vacant properties, so they could then intervene with code enforcement tools, rehabilitation grant programs, and other homeownership subsidies? The goal is to get new occupants into the vacant buildings before they deteriorate further and ultimately destabilize their surrounding communities.

Budavári knew that Baltimore City officials were already using digital maps with data overlays to guide decisions on everything from administering city services to managing abandoned properties. "I started thinking about whether there was a way to help them take those maps to the next level," Budavári says. His team started building a model that aims to use real-time information from sources such as water utilities and mail deliveries to produce a parcel-by-parcel portrait of each home's daily activity. The goal is to create an algorithm that predicts whether each home is occupied, temporarily vacant, or long-term vacant. (Remember, the city already knows where the abandoned properties in need of demolition are, so this tool would not be used to identify those.)

Researchers have been going door- to-door, collecting what is known as "ground truth" data, or information about a set of properties for which they know, with 100 percent certainty, the occupancy status. Budavári and Garboden will use half the ground truth data, along with postal service and water utilities information, to train their tool. Then, they will assess whether that tool does a good job of predicting occupancy status by testing the algorithm on the other half of their ground truth dataset. The researchers say this will be an iterative process; they can look to see where errors are, figure out why, and experiment with adding new sources of information to improve their predictions.

Once the researchers perfect their tool, they hope to share it with other cities struggling to identify vacant housing. "If the postal service data turns out to be a really accurate way to measure and predict these things, for example, then that will be useful to know nationwide," Garboden says. Budavári and Garboden applied for more funding from the National Science Foundation to develop similar tools with partners in Kansas City, Kansas, and New Orleans. Both cities are included in the Bloomberg Philanthropies' What Works Cities initiative to help midsize cities better leverage data-driven decision making.

"I really like Baltimore. I have been living here for close to two decades, and it's really turning in a good direction," Budavári says. "I'm hoping that we can help with that improvement. That's my primary goal with this. However, I see a lot of other interesting mathematical challenges with this project that inspire me as a scientist."