When Philip Franklin Wagley, Med '43 (MD), began visiting Baltimore's Evergreen House as the physician of its matriarch, he may have assumed he would be the one giving the advice. But the reverse proved true when his patient, Alice Warder Garrett, began teaching her young doctor about art. "Eventually, Mrs. Garrett didn't need to be seen medically every week. She was delighted to have company and to talk about her art. She would have her staff bring in paintings and pictures, and she would talk about them," says Mary Frances Wagley, Philip's widow. Because Philip, a member of the Johns Hopkins faculty for nearly 40 years and a leader in teaching medical ethics, went straight from college to medical school to his career, he'd had little time to study the arts. Garrett's friendship and tutelage, Mary Frances says, "awakened him to a whole new world—one that he'd be interested in for the rest of his life." 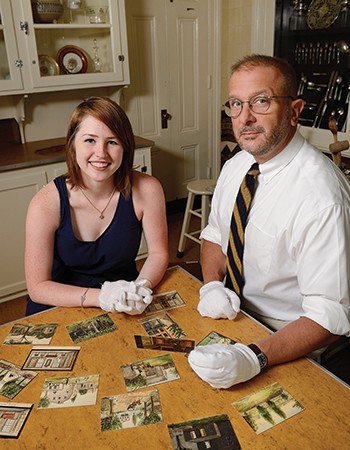 To honor Philip's affection for Evergreen, which was bequeathed to Johns Hopkins in 1942, Mary Frances pledged $500,000 in 2015 to endow its directorship. With support from several other individual donors—including members of the Evergreen House Foundation, created upon Alice Garrett's death in 1952 to assume ownership of Evergreen's fine-art collection and on which Philip Wagley served several years as president—the endowment has reached a total of $700,000 toward its $1 million goal.

James Archer Abbott, Evergreen Museum and Library's leader since 2007, has been named the inaugural Philip Franklin Wagley Director and Curator. "It's an honor to have this title because Evergreen means to me what it meant to him," Abbott says. "His life changed the moment he crossed the threshold because he had an inspirational patient who was passionate about engaging with and sharing art."

Philanthropic support for Abbott's position frees other funding that Evergreen can use toward exhibitions, outreach programs, and additional professional staff. "Museums are fragile entities," Abbott says. "A lot of times, museums fail because they don't have the financial foundation to withstand the tough times. Mary Frances has made Evergreen all the more permanent through her support."

With Evergreen's general operating funds covering the day-to-day operations of the museum, Wagley's support gives Abbott more time to work closely with students, including those from the Krieger School of Arts and Sciences' Program in Museums and Society. "I'm doing what Mrs. Garrett was doing when Dr. Wagley sat by her bedside—educating the young man and encouraging him to collect and explore art," Abbott says. Johns Hopkins students may apply for a yearlong curatorial internship to take part in the day-to-day operations of the museum in the fall and work with Abbott to develop their own exhibition at Evergreen in the spring.

Courtney Harris, A&S '11, now a curatorial research fellow at Boston's Museum of Fine Arts, credits her experience as Evergreen's 2010–11 student curator with helping propel her to graduate school and, later, a position with the Commission for Looted Art in Europe—a nonprofit organization that researches, identifies, and recovers stolen property. "I learned so much from Jim about loan negotiation with institutions that aren't your own, and how to write compelling object labels, train docents, and speak effectively about an exhibition," Harris says.

Months before Samantha Igo, the 2016–17 student curator, was slated to begin her term, Abbott introduced her to a potential topic for an exhibition: a set of miniature paintings featuring landscapes and interiors that have never been publicly displayed. "He emailed me in the middle of the summer to check in on my progress, even though he really didn't have to until September," says Igo, whose exhibition, Rooms With Views, is on display at Evergreen through September. "He's a very dedicated mentor, and I'm excited to learn from his professional wisdom."

"We've had student workers considering careers in the sciences. [Then] something just clicks for them here, and they decide on a different path, in museums. That's the most rewarding aspect of my work," Abbott says.

For Mary Frances Wagley, the reward is in honoring her husband and supporting Evergreen Museum and Library. Her gift to endow the directorship is one in a series of generous gifts she's made to Johns Hopkins and Baltimore community organizations whose missions were important to the couple. But the Evergreen gift may be the most personal. "On my first visit to Baltimore, Philip picked me up at the Belvedere Hotel and brought me to Evergreen. He sat me in the library while he visited Mrs. Garrett. I remember looking at the books, the art, and being impressed and overwhelmed," she says. "Evergreen meant a great deal to him, and this gift is a gesture of gratitude to Evergreen and to Baltimore, where our lives intersected."