A short woman in an old T-shirt and blue jeans saw the telescope one evening as she was walking through the crowd near Baltimore's Lexington Market, past men hawking cheap fragrant oils, honking cars, and teenagers milling about with friends. She glanced at me, I smiled, and she tentatively walked over to see what was going on. "Would you like to look at the moon through a telescope?" I asked. An older gentleman with wrinkled hands and a warm smile who had just used a telescope for the first time spoke up, saying she should definitely take a look. He and I put on hold our conversation about the vastness of outer space. 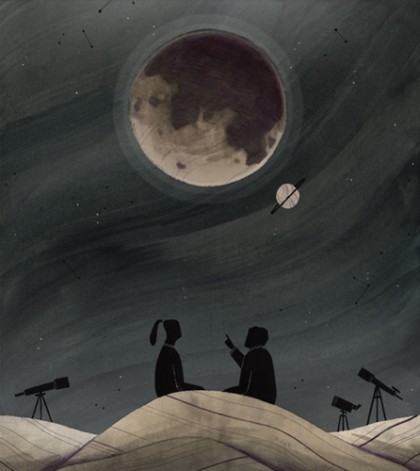 "Yep, and do you see the craters?"

She stepped back again, this time with a grin making its way across her face. Saturn was visible that night too, and I pointed it out. When our eyes both found the light in the sky, she said she was pretty sure that it was just a star; it certainly didn't look like a planet from where we were standing. I asked her to take a closer look at it and tell me if the light was twinkling like stars in the night. She conceded that it wasn't.

Since she was still unconvinced, I redirected the telescope to Saturn, and after a couple of adjustments the planet was in view. She looked through the telescope again, her face lighting up with excitement as she inspected the gas giant and its rings. She started laughing. "I'm 55 years old, and I've never seen anything like this before."

Moments like this are a big part of the reason why #popscope, an urban public astronomy movement that sets up free pop-up astronomy nights, is so powerful. Every month, in cities from Ottawa, Ontario, to Jacksonville, Florida, groups of astronomy enthusiasts set up telescopes on street corners to show passersby something they don't often get to see—the expansiveness of space and its myriad details.

More important, it gives us a chance to connect and better understand one another. Regardless of who you are or where you're from, the mysteries of the universe have the power to make us ask big questions and see from a different perspective once in a while. All we have to do is look up.