Hopkins in Your Neighborhood program brings alumni together, closer to home 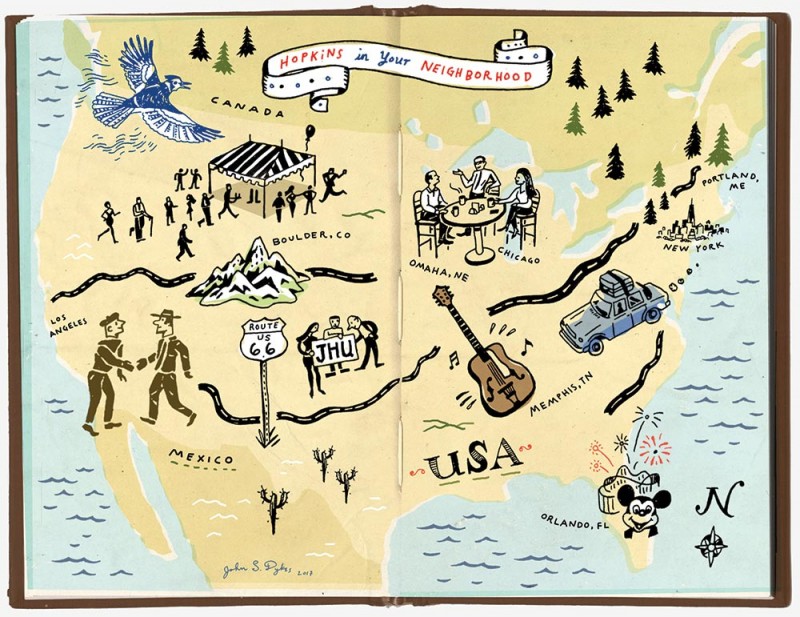 Living halfway between New York City and Boston, two metropolitan hubs with active alumni chapters, Lindsey Hutzler, A&S '12, would travel two and a half hours whenever she wanted to attend alumni events. "Connecticut was lost in the nexus between the two states," says Hutzler, who lives in Hartford, Connecticut. Tired of the long drives and wanting to explore the Blue Jay network at home, Hutzler contacted the Office of Alumni Relations' Krystle Ongaco, who discovered close to 700 alumni in the Greater Hartford area. Together, they organized an event in October 2016, where 14 alumni gathered for a three-course meal.

Since 2013, the Hopkins in Your Neighborhood event series has brought together alumni for dinners, happy hours, brewery tours, mixology classes, and more. Hosted by the Office of Alumni Relations, the events target smaller communities of Johns Hopkins grads without a dedicated alumni chapter, in hopes that attendees will continue to lead alumni networking efforts locally. To date, 40 events have been held in cities such as Princeton, New Jersey; Omaha, Nebraska; and Portland, Maine. "We want alumni in smaller, more local communities to stay engaged with each other and the university," says Ongaco, associate director of Regional, Student & Young Alumni Programs. "The events are a good starting point" for introducing alumni and encouraging future meet-ups.

Hutzler enjoyed October's event so much that she hosted another in January to carry on the momentum from the last event. "Alumni want to maintain a sense of connectedness with the university after graduation day, but they aren't sure how," Hutzler says. "These events help bring together alumni in neighboring communities who might not even be aware of one another." Jordan Litner, A&S '10, agrees; he helped coordinate an October event at Argos Inn, a boutique hotel and cocktail bar in Ithaca, New York. "It's not always easy to meet new people," Litner says, "but having an additional network in place helps to share good times, events, and ideas with fellow alumni."

To host an event, contact the Office of Alumni Relations at 800-JHU-JHU1 or alumevents@jhu.edu.