Several years after Johns Hopkins began accepting its first female undergraduates, the athletic center was still a male bastion. All female athletes, regardless of whether they swam or fenced, shared a single locker room. But the motley arrangement had an unintended result: the formation of the women's cross-country team. 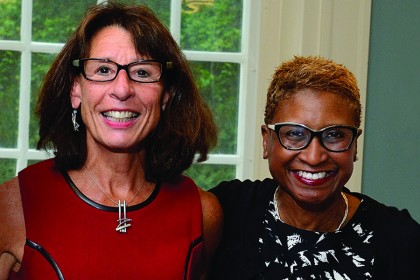 Paula Boggs, A&S '81, found herself in that locker room regularly. A member of the Reserve Officers' Training Corps, she needed to stay in shape and began to talk about running with other athletes as they tied their cleats or donned their jerseys. Soon she'd rallied enough women interested in running to form an unofficial team. They held regular practices and persuaded Gary Green, the fencing coach, to lead them. Over time, Larry Goldfarb, a supporter of Johns Hopkins Athletics, took notice of the group; he bought matching shirts for the runners and funded their trip to compete in what was then the Middle Atlantic Conference Championships. The women won. Johns Hopkins made cross-country a varsity sport after that, in 1979.

"This journey really bonded these young women very, very tightly," Boggs says. "I consider these women some of my closest, dearest friends on the planet." Boggs was the team's ultimate cheerleader, says Eleanor Simonsick, A&S '80, SPH '88 (PhD), Boggs' close friend and former teammate. "She led by example. She put everything she had into it and then made sure the people behind her were cheered on all the same."

Simonsick and Boggs' friendship was solidified over one spring break, when the pair traveled to Montgomery, Alabama, where Boggs' father taught biology and protozoology at Alabama State University. They sat in on one of his classes, trained for upcoming track meets, and had countless hours to talk. Simonsick brings up another memory, when the women spent the night at a teammate's parents' home so they could participate in a regional competition. Boggs pulled out her guitar and started to play. She'd do the same years later at Simonsick's wedding at the Baltimore Zoo.

After graduation, Boggs attended UC Berkeley Law and went on to serve as a federal prosecutor and as general counsel for Dell and Starbucks. She now performs with the Paula Boggs Band. Simonsick served as head coach of the women's cross-country team from 1983 to 1993 and works as an epidemiologist at the National Institute on Aging.