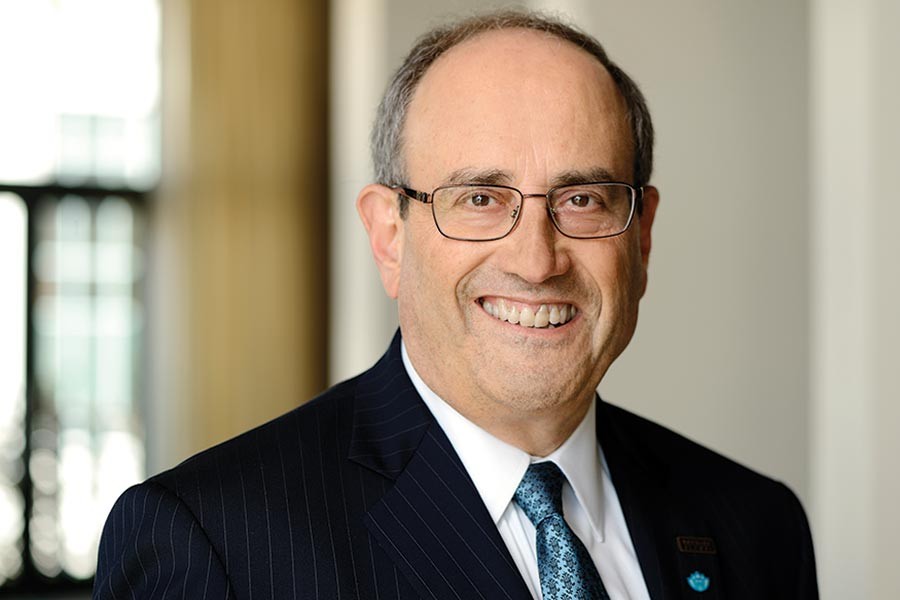 David Yaffe, A&S '74, facetiously calls his commitment to Johns Hopkins his "alternate career." The new president of the Johns Hopkins Alumni Association, he has certainly been active in alumni affairs. He was a founding member of the Second Decade Society and has held leadership positions on the Krieger School's Advisory Board and the Alumni Council. So when his eldest daughter, Andrea, announced that she wanted to study international relations, Johns Hopkins was an obvious choice. But when it came time for a campus visit, Yaffe stayed home. "I pointedly did not go because I wanted her to see the school without my filter," he says. "But she came back quite enamored."

Through his daughter's experience he saw how the university is working harder than in his day to promote activities and opportunities for undergraduates. Alumni affairs have shifted, too, and Yaffe has been involved in some of that change. While on the Alumni Council in 2011, he helped revise the Alumni Association's mission to focus on alumni interests and locally driven programming rather than top-down planning. The most recognizable outcome of that effort is the Affinity Groups program, which creates a forum for alumni to come together based on shared interests, regardless of school, year of graduation, or location. In the five years since it debuted, the program has grown from three to 27 groups. Yaffe himself is a founding member of the Law Affinity Group. "It's helped keep me intellectually engaged as well as involved with the school," he says.

Yaffe, who grew up in Waukegan, Illinois, applied to Johns Hopkins because the university dovetailed with his interest in political science and he appreciated the school's proximity to Washington, D.C. At the university, he rounded out his social and behavioral sciences course load with classes in economics. He was president of Sigma Phi Epsilon fraternity as a junior and a resident adviser his senior year. Yaffe went on to a legal career in energy regulation.

Yaffe says he gets a sense of renewal being "involved with a school that prides itself on discovery and asking important questions about science, life, and our society. I find the intellectual inquiry and ambition of the people I run into energizing."

As Alumni Association president, he wants to help others experience that infectious connection. He plans to nurture the growth of the Affinity program and improve communication—through social media and other channels—between the university and alumni. "Sometimes, as alumni, we take for granted that we've graduated from this unique and prestigious institution," Yaffe says. "Hopefully, alumni will take some pleasure in revisiting the sense of wonderment that comes from reconnecting with the school and their colleagues."