It took a moment to realize I was bleeding. It must have happened during my attempt to prevent two students who were fighting in the hallway from coming into my classroom. I had been so busy trying to restore order that I hadn't noticed I had been cut. As the blood ran down my fingers and my students whooped and chattered, I wanted so desperately to be anywhere else. I had worked for six years to be the best teacher I could be. But now I felt like a babysitter. I was pouring my soul into this job but feared that I wasn't doing it well. Was I helping anyone? 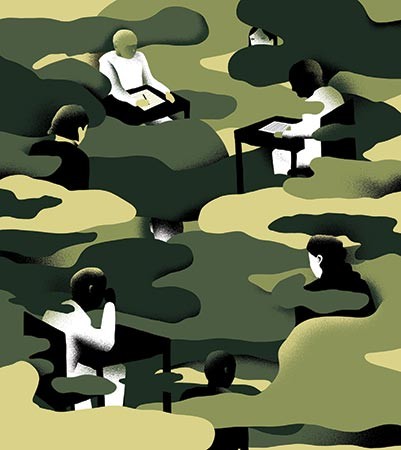 I looked at the students, who seemed not even to realize I was in the room. There was my answer.

The next day, I told my boss that I had volunteered for a deployment to Djibouti with my unit of the Maryland National Guard. I don't know if anyone else ever thought to take a break from a civilian career by way of a combat tour, but they'd have to be just as crazy as I am.

While I was deployed, a friend sent me an email. "This woman reminds me of you, Morgan," she wrote. The note linked to a clip from Nightline in which Diane Sawyer visited Strawberry Mansion, a dangerous high school in Philadelphia. At the helm of the school was Principal Linda Cliatt-Wayman, who was asked why she continued to work there even though it was a seemingly lost cause. Cliatt-Wayman's response: "I can see myself in these kids."

Night after night, I found myself watching that segment. I had spent all this time trying to get away from my students. Now I missed them so much. Though I was in uniform on a combat deployment halfway around the world, my fellow soldiers still knew me as "the English teacher." In the coming weeks, I started getting emails from students and their parents. Letters of appreciation and reports of recent successes. In his freshman year, one of my students had made the honor roll for the first time since sixth grade.

I realized then that like Linda Cliatt-Wayman I saw a piece of my younger self in each one of my students. Teaching them was a battle, but one worth fighting. When I returned from overseas, I headed back to a new classroom in a new school with a renewed outlook. I was "the English teacher," a title I now wear with pride and purpose.

Morgan Shepard, Ed '15 (Cert)(MS), is a Teach for America alumna, a fourth-grade English teacher, and a member of the Maryland Army National Guard.