The sound of science: Hopkins alum and Radiolab producer Soren Wheeler on the power of podcasting

In 2001, a girl just shy of 10 released a helium balloon from her home in northern England. On it, she scribbled, "Please return to Laura Buxton," along with her address. It drifted nearly 150 miles southward and ended up in the hands of another 10-year-old English girl—also named Laura Buxton. 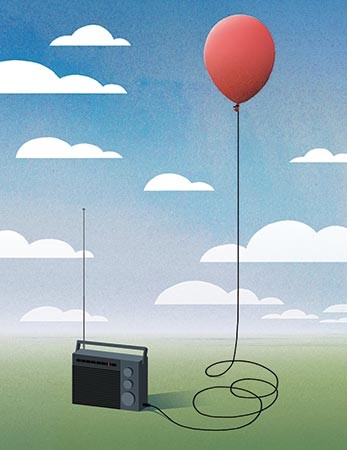 For Soren Wheeler, A&S '07 (MA), senior producer for the popular public radio program and podcast Radiolab, this was storytelling gold. "I found the balloon story in a book called Beyond Coincidence, and I just couldn't stop telling people about it," he says. A slew of trans-Atlantic calls later, he tracked down the now college-age Buxtons and got them on air as part of an hourlong exploration of the meaning of "coincidence" and the nature of order and chaos. The show also had a cautionary tale from a compulsive gambler, tossed cold water on the idea of the "hot hand" in basketball, and explored the noisy randomness of life at the cellular level.

Radiolab, produced by WNYC, takes relish in using moving, funny, or frightening stories to explore mostly science topics—from genetic manipulation to interspecies communication. "The show is consciously built to not smell like a lesson, and all we worry about is telling a good story and raising good questions," Wheeler says. "It's incredibly fun to do, and I also think it's, sneakily, a really good way to bring more and more people into a critical-thinking habit of mind."

Wheeler came to Johns Hopkins for its Master of Arts in Science Writing program after a decade of researching and writing about K-12 science education. While working as a project coordinator for the American Association for the Advancement of Science, he co-authored the Atlas of Science Literacy. Over time, he developed a jaundiced eye for how science is often taught. "We do quite well in elementary school, where we see energetic curiosity—poking at the world and asking questions and experimenting," Wheeler says. "And then we get into middle school, and it becomes vocabulary tests and things like that." He also learned that decisions about public school curricula can easily get politicized and involve myriad players—states, school districts, teachers organizations. "It's a really tough place to effect change," Wheeler says. "I want to get people to notice the world around them, and science journalism would let me do that for a wider swath of people than just writing for teachers."

It was Johns Hopkins instructor David Kestenbaum, then doing science reporting for National Public Radio, who told Wheeler about Radiolab. He eagerly stuck his foot in the door: "I showed up as an unpaid intern for a couple of months and sort of wiggled my way into the scene." When Wheeler came aboard 10 years ago, the still-emerging show created only five hours of audio a year. Now it's broadcast weekly and is among the most popular podcasts in the country. Serving as senior producer, he says, is tantamount to being "right-hand man" to show founder and co-host Jad Abumrad. "It's all very collaborative, but my contributions to the show are, fundamentally, being a part of deciding which stories we do, which we don't, and helping decide how to tell them." He also does some of his own reporting and has taken listeners from an Iowa ape sanctuary to a toxic copper mine in Montana. "You do have to write in a way that sounds more conversational," Wheeler says of his page-to-airwaves transition. "If you just pick up and read even a well-written science article, the listeners will get bored real quickly."

Curiously, the one science story the program has yet to tackle might be the science issue of the age: global warming. "It's a hard topic to turn into an experience or an emotional, personal story," Wheeler says. "Weather is what happens day to day in a certain place, while climate is spread out over enormous amounts of time and enormous areas. Any narrative is always going to be about the weather."

You could say that the show succeeds because it taps the gee-whiz grade school approach to science, full of wonder and surprise as the hosts take listeners on journeys of discovery. Sound effects and music enrich the experience. "Audio gets you a different kind of access to vicarious experiences," Wheeler says. "It goes straight to your brain, straight to your emotions."