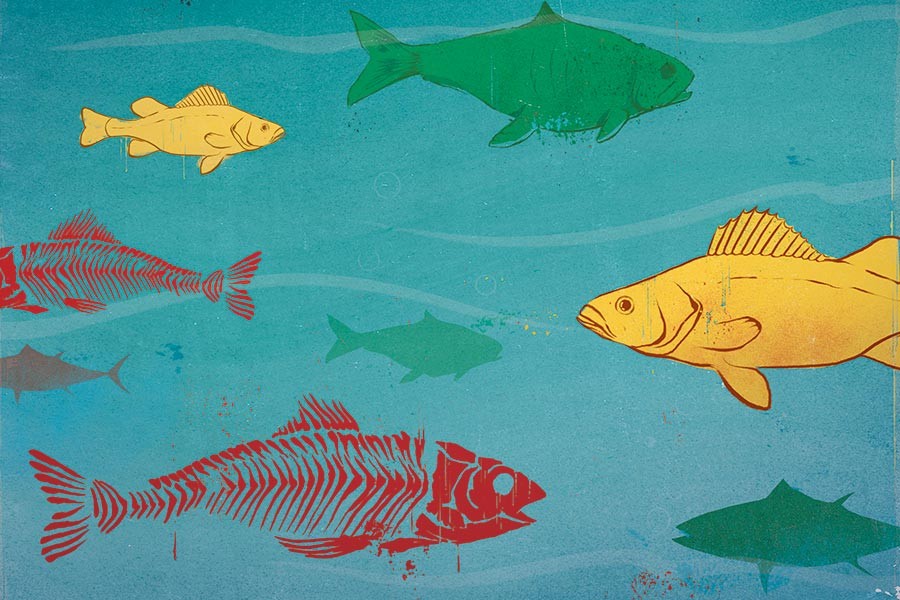 Earlier this year, sushi fanatics got some disheartening news: Environmentalists were petitioning to have the Pacific bluefin tuna considered for endangered species protection, a move that would keep the popular delicacy off high-end menus across the United States. Fishermen had nearly exhausted the species to meet consumer demand, pulling 97 percent of the tuna out of the water and onto our plates. In fact, nearly 90 percent of the world's fish stocks are being fished at maximum capacity or are already overfished, according to the Food and Agriculture Organization of the United Nations. "The statistics are grim," says Jennifer Dianto Kemmerly, A&S '00 (MS). "As the population grows, and more and more people eat seafood, there's just not enough supply to meet demand."

Dianto Kemmerly is the director of Seafood Watch, the country's leading consumer information guide for sustainable seafood, run by the Monterey Bay Aquarium in California. She leads a team of scientists who study more than 350 types of fish and shellfish, analyzing the health of those species, how they're caught or farmed, and whether fishing methods harm other marine animals or the aquatic ecosystem. Each fish is then assigned a color-coded designation: Best Choice (green), Good Alternative (yellow), or Avoid (red). Since its launch in 1999, Seafood Watch has distributed more than 56 million printed guides, and its smartphone app has been downloaded 1.7 million times. Users can plan ocean-friendly meals and search for nearby restaurants and stores that serve Best Choice items. Dianto Kemmerly says the idea is to arm consumers with information. "Ask questions to show you care about sustainable seafood, whether it's at a restaurant or a grocer," she adds. "That persistent noise is enough to keep businesses engaged with us and the rest of the environmental community. It shows that there is a clear market demand for improvements."

Seafood Watch has worked with major players, including Whole Foods Market and Disney resorts and parks, to transition to selling only environmentally responsible products. The program was also a key player in saving some imperiled sea creatures. When West Coast groundfish—including rockfish, Dover sole, and sand dabs, once a cornerstone of the California fishing industry—almost vanished about 15 years ago, regulators, conservation organizations, and fishermen used Seafood Watch's data to plan a recovery effort. Today, most types of the fish have been upgraded from its Avoid list to Best Choice or Good Alternative.

Most recently, Seafood Watch has set its sights on combating fraud and illegal fishing of imported seafood. For example, the conservation group Oceana found out last year that nearly 40 percent of the crab cakes that Maryland and D.C. restaurants advertised as coming from the Chesapeake Bay (recommended by Seafood Watch) actually contained crab from places like Indonesia (on the Avoid list because of destructive fishing practices). Dianto Kemmerly's program is currently assisting a presidential task force in addressing such problems; she and her colleagues are pushing for mandates that would require tracking seafood back to its source. "Without full traceability, we don't know exactly what these species are, where they're from, or how they're caught or farmed," she says.

Better traceability can also help in the fight against slave labor, human trafficking, and other cruelties in the global seafood industry exposed recently in a Pulitzer Prize–winning investigative report by the Associated Press. Seafood Watch is helping create an online assessment tool for businesses to identify vulnerable points in their seafood supply chain, so products from fisheries subject to such abuses don't make it to a kitchen or store shelf. Dianto Kemmerly hopes the tool, expected to launch early next year, will improve the lives of fishery workers worldwide. She and her team are also working on the ground, bringing food-service buyers to regions like Southeast Asia, where forced labor is often used, to meet with local suppliers and survey working conditions. "It's starting to change things," she says. "There's this whole trickle-down effect that has been amazing to see."