Happenstance at the Hut 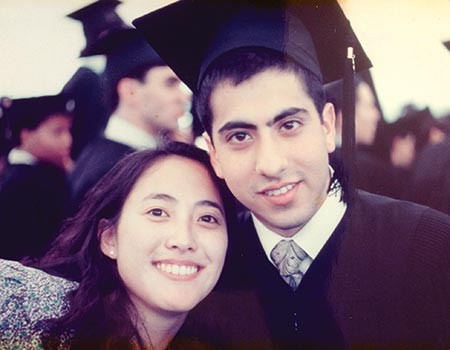 Image caption: Suzy and Ranjit Bagga had a meet-cute in the Hutzler Reading Room and have been together ever since.

They met in the Hut, the 24-hour Albert D. Hutzler Reading Room in Gilman Hall, a hangout known to generations of Homewood students as the place to go when everything else is closed. Suzy Kim, A&S '91, was a sophomore from upstate New York majoring in philosophy. She looked up from a book and saw a cute guy walk in with one of her friends. Alabama native Ranjit Bagga, A&S '89, she found out, was finishing his senior year, co-chairing the Milton S. Eisenhower Symposium and applying to medical schools. Yet, remembers Suzy, this "Jeet" guy "was not particularly charming" on first meeting; in fact, he was aloof to the point of being rude.

No matter, she needed a date for the upcoming Phi Mu sorority semiformal and began hanging out at campus happy hours, known at the time as "Hoppy Hour," in the hopes of seeing him again. When they did reacquaint, Jeet was not only attentive but sweet. Happenstance at the Hut led to a Louis Malle film at the Charles Theater, a bit of hand-holding, the sorority dance, and, after five years of a long-distance relationship, a proposal. "Getting married was a foregone conclusion," remembers Suzy. "He proposed when he was able to purchase a small, simple engagement ring."

Since 2001, the couple has lived in Louisville, Kentucky, where Ranjit is a neuroradiologist in private practice. Suzy, who has a law degree, puts most of her energy into the couple's two children, along with charity work in and around Louisville. And though neither Suzy nor Ranjit is the type to do chores on the weekend in a Johns Hopkins sweatshirt, they attend as many reunions and alumni events as possible. Suzy is the gift chair for the 25th reunion of the Class of 1991, has volunteered to interview prospective Johns Hopkins students around the country, and served on the university's board of trustees from 1991 to 1995 as the "young trustee" for the Class of 1991. Together, the couple supports the Hopkins Fund, which Suzy has been involved with as a volunteer.

But there is a more lasting Johns Hopkins legacy within the Bagga family, one that endures every time their firstborn, an 18-year-old freshman at Middlebury College in Vermont, signs his name—Gilman Bagga. He was named in honor of the Homewood building that launched his parents' life together. "We can't remember whose idea it was to name our son Gilman, but I'm convinced it was me," says Ranjit. "We both loved the name and what it symbolized."