High-pitched alarms beep sporadically. A ventilator wheezes. You have an IV line stuck in your arm, a breathing tube down your throat, and a catheter in your urethra. As a patient in a hospital intensive care unit, chances are good that you feel helpless, scared, and confused. Odds are also good, new research shows, that the ordeal could trigger mild to severe depression.

In a recent study, Johns Hopkins researchers found that a third of patients experience symptoms of depression after their stay in an ICU, and the symptoms continue for at least a year after discharge. The review of more than 4,000 patients from 42 studies confirms what Dale Needham, a professor of pulmonary and critical care medicine, and O. Joseph Bienvenu, an associate professor of psychiatry, have observed for years: that ICUs can be psychologically challenging environments, often with lasting effects. And it's not just the oldest and sickest patients who suffer the most, as the team expected; they found depression spread evenly among patients, regardless of age, gender, severity of illness, or length of stay in the ICU. More predictive were those patients who had psychological symptoms before entering the hospital or who showed symptoms such as anger, nervousness, or stress during their ICU stay.

Needham was a new faculty member at Johns Hopkins in 2003 when he participated in a study looking at patients for up to five years after treatment in an ICU. It was unusual for an ICU doctor to sit down and talk with patients after their discharge, and Needham was struck by how much they were still suffering. He has worked on post-ICU issues ever since, forming the multidisciplinary Outcomes After Critical Illness and Surgery clinical and research group at Johns Hopkins to focus on understanding and improving patient outcomes after critical illness and surgery.

Needham and Bienvenu hope that their study, published in the September issue of Critical Care Medicine, will help raise awareness among their colleagues. Armed with data showing that prior psychological problems are reliable red flags, they want to get ICU physicians to screen for such histories when patients are admitted and then pay attention to any psychological symptoms that may develop during the patients' stays.

The team also wants to educate primary care physicians to recognize and monitor symptoms of depression and other consequences of ICU stays. Because they see so few patients who are sick enough to be admitted to the ICU, "they won't be that familiar with the post-ICU phenomenon," says Needham. Improved awareness, Bienvenu notes, could lead primary care doctors to avoid prescribing medications that might worsen the symptoms of a patient already suffering from post-ICU confusion, which can lead to depression, and help them recommend psychiatric treatment, which may be as simple as an antidepressant medication. "Primary care physicians prescribe three-quarters of the antidepressants in the country, so that's probably a reasonable starting point. But it's also true that these patients probably are going to need more than that."

The study concludes that post-ICU physical therapy that also works on psychological recovery may have promise. Needham is part of a team—together with Ann Parker, instructor of medicine at Johns Hopkins, and Mark Hegel, professor of psychiatry and community and family medicine at Dartmouth's Geisel School of Medicine—that won a one-year School of Medicine Innovation Award in July for preliminary work to design a web-based e-health application that supports combined physical and psychological rehabilitation after ICU stays. "It could be physical therapy, doing laundry, or going to get groceries," says Bienvenu. "It also includes things that normally are intrinsically enjoyable, like going out to eat or going to see a movie." The key, he says, is "getting patients to do things they haven't been doing, things that provide a sense of accomplishment." 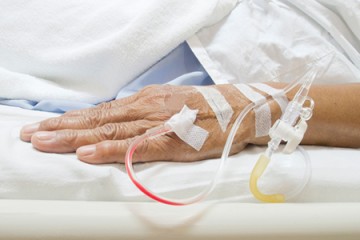