Hopkins and the Great War 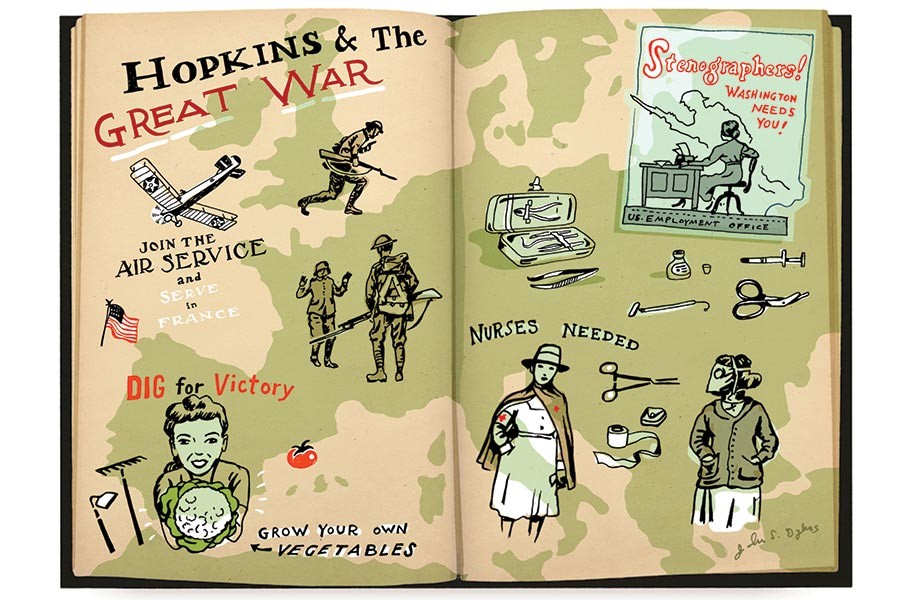 It's hard to imagine Gilman, Maryland, and Latrobe halls as Army barracks for the Student Army Training Corps, a U.S. War Department program created to train soldiers for war. Or the Homewood campus plastered with posters pleading, "Five thousand by June. Graduate nurses, your country needs you." But Johns Hopkins did see its share of action during World War I, both at home and on the front line.

The university's first cross-campus exhibition, Hopkins and the Great War, tells the story of the war's impact on the university through personal artifacts, photographs, propaganda posters, official records, faculty papers, medical instruments, and more. On the Homewood campus, personal letters sent between those on campus and abroad reveal the true atrocities of war. At the School of Nursing, visitors find it hard to forget one jarring image of young Johns Hopkins nurses wearing gas masks, says exhibit curator Jennifer Kinniff. And at the School of Medicine, photographs of the work of John Staige Davis—the man credited with moving the field of plastic surgery forward—on disfigured soldiers show the most primitive stages of reconstructive surgery.

The exhibit, open through January 2017, showcases the stories of people such as Clara Noyes, a Johns Hopkins–educated nurse and the director of the American Red Cross at the time; Elizabeth Gilman, daughter of Johns Hopkins' founding president, who received a touching letter from a young man she befriended in France asking that his diary ("a love diary") be sent to a friend who would know where to send it next should he not return home; and faculty members recruited by the government to research ammunition and chemical warfare.

"It's a war where there are no surviving veterans today," says Kinniff, "so it's often forgotten about. It was something so terrible in its time, even for people who remained on campus. The exhibit gives us a new way to look at Hopkins as being resilient and changing dramatically in wartime."

Visit http://exhibits.library.jhu.edu for hours and locations.