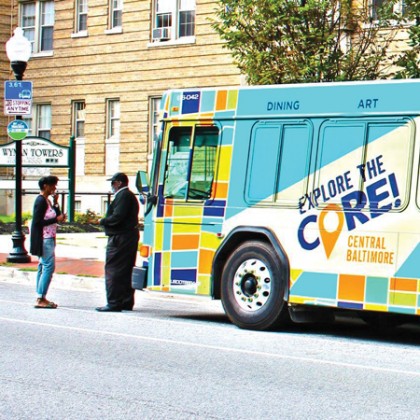 "Explore the Core," a new marketing campaign, aims to draw attention to Baltimore City's vibrant center. With support from Johns Hopkins and the Central Baltimore Partnership, the campaign highlights the pleasures of visiting—and living in—the 10 neighborhoods near the university's Homewood campus.

The campaign is an outgrowth of the Homewood Community Partners Initiative, Johns Hopkins' ongoing effort to work with local stakeholders to attract 3,000 new households to neighborhoods near Homewood. The university is spending at least $10 million over five years to help advance goals drawn up by community leaders and residents, such as improved schools and public spaces.

The HCPI neighborhoods have been thriving in recent years, says Salem Reiner, Johns Hopkins' associate director of economic development. Over the past four years, 765 new housing units have opened in the area. Nearly two dozen restaurants, shops, and arts venues opened in just the past year.