Mama, I made it

I hadn't driven far from BWI airport when I had to pull off into the rent-a-car lot. My friend and co-producer DJ Khalil was on speakerphone, calling to say Jay-Z had become so enamored by a song I had written that he wanted it for his next album, an album that already had produced a pre-release hit single in "Show Me What You Got" and was all but guaranteed to ship platinum. He told us the album was set to be released in two weeks and that my song, which would serve as the track behind Jay-Z's "I Made It," was the last to make the cut. 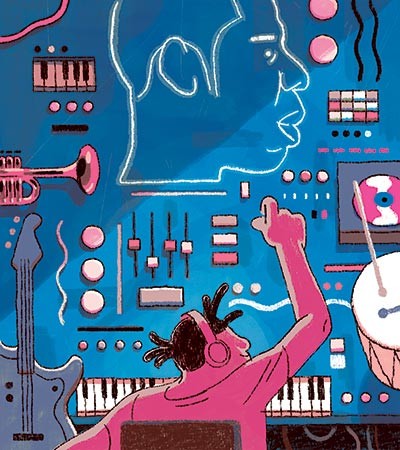 My wife, Mashica, and I, just back in Baltimore for a concert with Yo-Yo Ma and the Baltimore Symphony Orchestra, jumped out of the car screaming. I felt like lying on the pavement and crying. The struggle, the private lessons, the hard work—it had all paid off. I walked in circles repeating, "Thank you, God. Thank you, God."

Months earlier, I had woken up feeling nostalgic and spent the day in the studio layering piano, then Rhodes, then bass, drums, horns, and the crackling of a vinyl record. I asked Mashica to add her special touch of vocals by screaming, "You don't know!" and topped the track with a friend screaming, "Oh!" The finished product was fuzzy and soulful and something for the people. I sent it to DJ Khalil, my platinum music producer, who said I had started something special and he knew exactly what to do with it. And then I waited for his call.

Back on the phone, DJ Khalil told me "I Made It" was a tribute to Jay-Z's mother. The rapper reflects on his ups and downs, highs and lows, and his great commercial and financial success. As I heard the song, I was overwhelmed, not just by the emotional stress and financial burden of being a new dad, musician, and provider but by the surreal moment of landing a song on such an important work of art. I felt relief and joy, along with a new responsibility to produce at the highest level. "Ya baby boy's a made man / I'm a hold the fam down like three generations / I'm talking when spaceships are around / And ya great-, great-grands / Reminiscing about the foundation you gave 'em." Listening to "I Made It," I thought about growing up in Baltimore as a kid whose mom suffered from drug addiction and died of AIDS but did her best with what she could, when she could. We had been through so much pain and had never had any closure. My song on Jay-Z's album, this precious gift, seemed to be her way of smiling and winking at me from the heavens.

Dontae Winslow, Peab '97, '99 (MM), is a jazz trumpeter, songwriter, and composer. He lives in California with wife Mashica and sons Jedi and Messiah.