Catherine Arnold ("Driven to Change," p. 10) is a freelance writer living in New York City. She covers science, health, and community stories for The Washington Post, Backpacker, and other publications.

Corey Brickley ("Still Pertinent After 50 Years," illustration, p. 38) is a Philadelphia-based illustrator and designer. Past clients include The New Yorker, The New York Times, Vice magazine, and The Huffington Post.

Rachel M. Cohen ("The Color of Bias," p. 19) is a Washington, D.C.–based journalist who focuses on education, housing, and reproductive rights. She is a 2014 graduate of Johns Hopkins, where she majored in sociology and history.

Elizabeth Evitts Dickinson ("Still Pertinent After 50 Years," p. 38) has written for The New York Times, Architect, and The Southern Review, among others. A Pushcart Prize nominee for both her fiction and nonfiction, Dickinson was recognized by Best American Essays 2016.

Christopher Myers ("Zebra­fish Pedagogy," photography, p. 12) has now done three water-related photo shoots for Johns Hopkins, including the swim team while underwater. He lives in Baltimore with his wife and daughters. 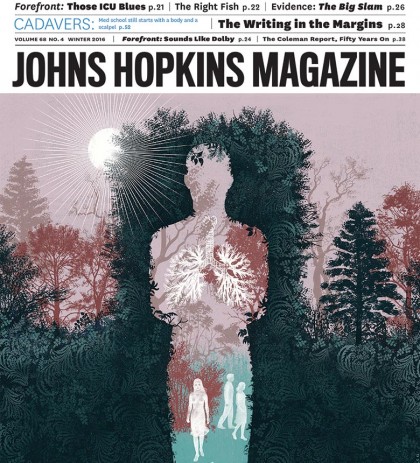 Twins Anna and Elena Balbusso pieced together traditional art media—acrylic, gouache, pen, and pencil—using digital techniques to create this issue's cover. The image, which accompanies "Learning From the Man Known Only as 'Him,'" on the use of cadavers in medical schools (p. 52), imagines a donor's body as an opening in the hedges of a memorial garden, representing the crossover from life to death. The award-winning illustrators' past clients include The New York Times, The New Yorker, and Reader's Digest.