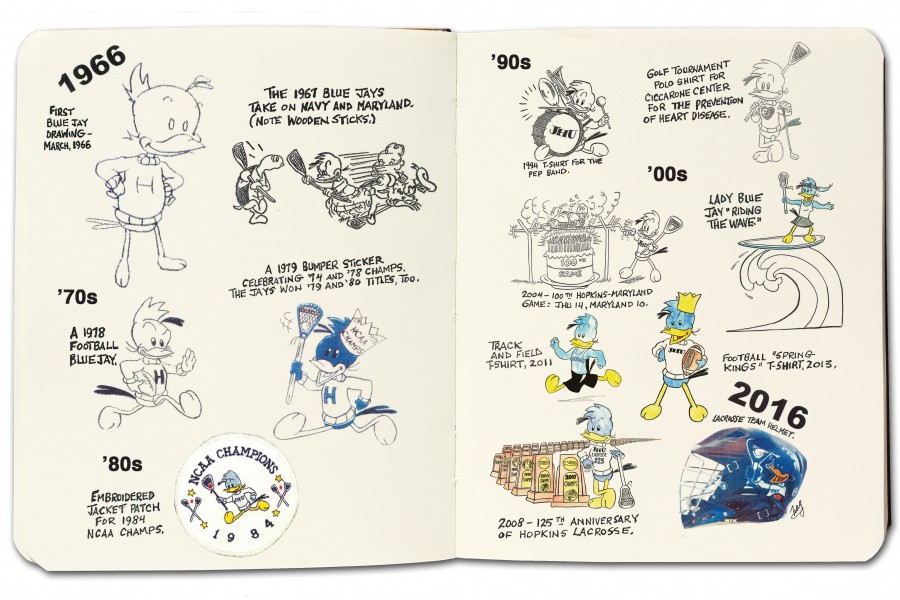 It was a cartoon blue jay. Yes, that jay. The scrappy sweater-clad bird (known to those in the know as the NAG Jay) that's become the official unofficial school mascot. Though this is the sixth season it appears on the lacrosse team's helmets, the bird engages in all manner of activities, from playing in the pep band to being Dr. Jay and wearing a stethoscope. The cartoon can be seen on hats, shirts, gym bags, umbrellas, even limited edition Nike shoes. The Alumni Association is currently selling the drawing on belts, dog collars, and other goods to celebrate its big 5-0. And at least 20 people sport the doodle every day—they have NAG Jay tattoos.

"Fifty years ago I never dreamed we'd still be talking about this bird," says Grauer. He was a self-taught political cartoonist back in 1966 when Caleb Deschanel—then Hopkins News-Letter co-editor and today an Academy Award–nominated cinematographer—asked him to create a cartoon blue jay to comment on things around campus, such as high book prices and parking problems (things never change, apparently). The bird really took flight a year later when it was used for a sports column called the Jay's Nest, thus beginning its long association with athletics. A common theme was the blue jay beating up another school's mascot.

Grauer continues to draw the jay to this day, and though the bird is now old enough for an AARP card, "he remains eternally youthful," his creator says. For this third-generation Johns Hopkins grad who never misses a home lacrosse game, having his whimsical doodle alive and flapping after a half century is a curious—and wonderful—thing. "One could have a hell of a lot worse legacy," Grauer concludes.