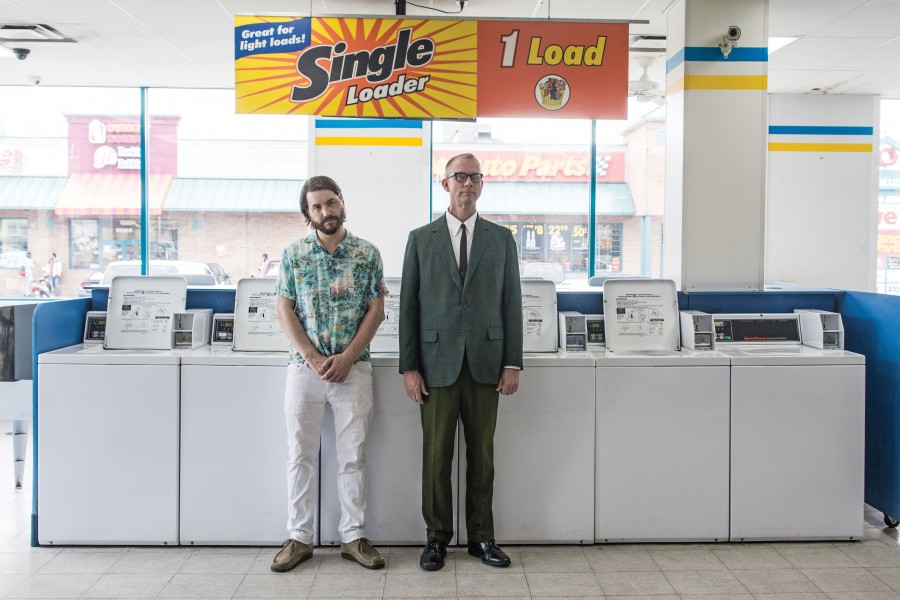 Matmos had to burp the pump. The electronic music duo of M.C. Schmidt and Drew Daniel, a Johns Hopkins assistant professor of English, were in Chicago going through the sound check for their concert when one very important band member started making a racket. Matmos was touring behind its recent album, Ultimate Care II (Thrill Jockey), which is named for the machine that served as the principal sound source for the recording: an early 1990s model Whirlpool washing machine.

And at that moment, she was not happy. The live set involves running a wash cycle onstage, requiring a 30-gallon trash can filled with water and a submersible pump. The entire 45-minute set—the duration of a cold-water wash with the Ultimate Care II set for a small load—is choreographed to it.

"We hadn't noticed that we set it to a large-sized load instead of small," Daniel says, pointing out that they fill the garbage can with enough water for a small load, not a large one, meaning the pump kept pumping though there was nothing left for it to pump. "We fried the engine, and it's making this horrible noise. We all look at each other, horrified. We have to play in an hour and our pump is not good."

Daniel says they started calling Home Depot to see if they could buy another pump, but where was a Home Depot near the club? It didn't help that the venue's sound staff, dubious about the whole washing machine thing in the first place, was watching this anxiety unfold. "Soundmen get really nervous when we walk in the door," Daniel says. "They're asking, 'What are you doing?' And we're explaining, 'No really, it's going to be OK.' Their eyes don't exactly light up when you say that you brought towels. And somehow when you tell a sound person that it's going to be OK—"

"It has the opposite effect," Schmidt says.

Daniel and Schmidt sit around a coffee table in their Baltimore home, and though they're able to joke about this experience now, it's apparent how stressful it was at the time. Both a couple and a performing duo, Matmos has been turning banal and bizarre sounds into a heady, playful, and danceable musical mélange for more than 20 years. Their approach begins with an idea—each takes a turn at coming up with the conceptual foundation of a record—that produces the sound sources they're going to work with. Those sources vary from noises recorded from surgical/medical procedures (2001's A Chance to Cut Is a Chance to Cure), the instrumentation of mid-18th century American music and medieval folk music (2003's The Civil War), or the Ganzfeld experiment that ostensibly tests for extrasensory perception (2013's The Marriage of True Minds). Sounds get recorded, processed, mulched, and recombined on a computer. The ultimate direction of the music is determined by what Schmidt and Daniel hear, guided by whatever intellectual, cultural, and musical ephemera filled their brains during the sounds' recording—such as medicine and surgery for Cut, parapsychology research for Minds.

This approach allows Matmos to encompass experimental art music, the elusive discovery of improvisation, pop's accessibility, and whatever else might come up. Daniel and Schmidt's music is as likely to recall the beautifully nuanced works of composer Bernard Parmegiani or the cinematic sound tapestries of field recording artist Chris Watson as it does the squishy dance-floor beatscapes of producer Josh Kit Clayton or the mirthful chaos of Trout Mask Replica–era Captain Beefheart.

Ultimate Care II took about a year to conceive and record. The entire time, Daniel admits, they thought the album was unperformable. Care is one long track that opens with the familiar clicking of a washing machine's knob being turned to the appropriate setting, followed by the flowing rush of water filling the machine. Rhythms come from the machine's motor and Schmidt beating, tapping, or otherwise creating sounds from the machine's housing itself. The ear wants to identify many moments as ordinary laundry sounds: the clickety-clack of a lid opening and closing, the clanging whir of the spin cycle, the lumbering, gargling swoosh of a load of heavy denim, the alarming thuds of an unbalanced load. Throughout, the wash cycle's sounds are being processed and interacted with by the duo on computers.

It makes for a disarmingly lovely and engaging musical suite, an inspired extrapolation of John Cage's "Living Room Music." Touring to support the album, though? Forget about it. "There was a stage of denial and bargaining when this record was over where we're thinking, 'We're just not going to play it live,'" Daniel says. They considered making a video of the machine running through its wash cycle and performing with that, but "the more we thought about that we were like, that's lame. That's a cop-out. But how?"

They turned to a few artist friends for help. San Francisco sculptor, designer, and installation artist Michael Brown helped them devise the submersible pump and garbage can solution, and Baltimore-based artist and instrument builder Neil Feather fabricated a skateboard platform that makes the washing machine mobile.

"It takes a village," Daniel says of realizing a seemingly impossible project, but sometimes it only takes one match to burn that village to the ground. That night in Chicago, something as simple as turning the machine to the wrong load setting appeared to have provided the spark. The pump sounded horrendous. And they didn't know where to buy a new one. And they were performing in about an hour. And "the sound people were not impressed," Daniel says. "They're looking at us like, Wow, you guys are a bunch of amateurs."

"Real bands," Schmidt adds, "have a backup pump for their washing machines."

A panicked phone call to Brown, their artist friend behind the pump-garbage can apparatus, informed them that they hadn't totaled the pump, merely allowed air to enter it. Once they cleared the line of air bubbles—in effect, burping it—everything went swimmingly, but it reminded them of how acutely they are tuned into a household appliance that came with the house they bought.

The Ultimate Care II that they used to make the album, and perform it onstage, is also what cleans their clothes. "There's a Pavlovian music thing where if I'm in a café and I hear a certain Bjork song, I have this panic," Schmidt says, alluding to the fact that for nearly three years in the early 2000s, Matmos worked with and toured with the Icelandic pop superstar. If, say, her "Army of Me" comes on, Schmidt thinks about everything necessary to perform that song: the Roland SH-101 synthesizer needs to be doing this, the Korg MS2000 sequencer needs to be set to that patch, et cetera. "I played those songs so many times over and over that that is deeply programmed into my mind. Now it's the same with the washing machine. Now when it goes into rinse, I sit up and think, 'Oh, now I need to do this.'"

The machine is "la prima diva absoluta," Daniel says. "It's The One and we're there to support the washing machine. Everything about performing this album is very composed when we do it live. I start a stopwatch as soon it starts and at exactly 10 minutes I need to change this and stop that. [The machine's] changes are important and we have to pull back so that it can take a solo in the cycle. There's a lot of suspense built into the fact that the washing machine is our bandleader onstage."

As they speak, their bandleader is packed inside a box on a boat heading to Hamburg, Germany. In June, Matmos leaves for a two-week European tour. Their first performance is at Berghain, the legendary techno club housed in a former power plant in Berlin. Of course, performing Ultimate Care II in Europe means having an Ultimate Care II in Europe. Daniel and Schmidt couldn't use a different model of washing machine for the performance because the timing would be off—plus, they add, eco-conscious European washing machines are more quiet, with wash cycles that run for up to two hours.

Schmidt was in charge of figuring out how to get an American washing machine over to Europe, reading up on customs laws and locating a shipping company. The duo isn't sure how, or if, they're getting it back to the States after the tour, but they are going to need an Ultimate Care II for a performance at the Institute of Contemporary Art in Boston toward summer's end.

They also just need the convenience of being able to do laundry. "We drove [the washing machine] to Boston and Chicago and New York and all over the place," Schmidt says. "Afterward, I put it back in the basement and it did laundry just like it never left. So right now there's a hole in my heart down there."

Schmidt hired a local washing machine repairman to tighten and reinforce the machine to prepare it for its overseas journey and European jaunt. They didn't get a chance to rehearse with the machine after that reinforcement. When asked if its sound changed as a result of the reinforcement, they exchange a quick look.

"I don't know," Daniel says. "I hope not. What if it's tighter and you can't get some of those resonances?"

Schmidt rolls his eyes. "It's not a Stradivarius," he says. "It's going to sound pretty much the same."