For patients in tough situations, sometimes the best thing is humor 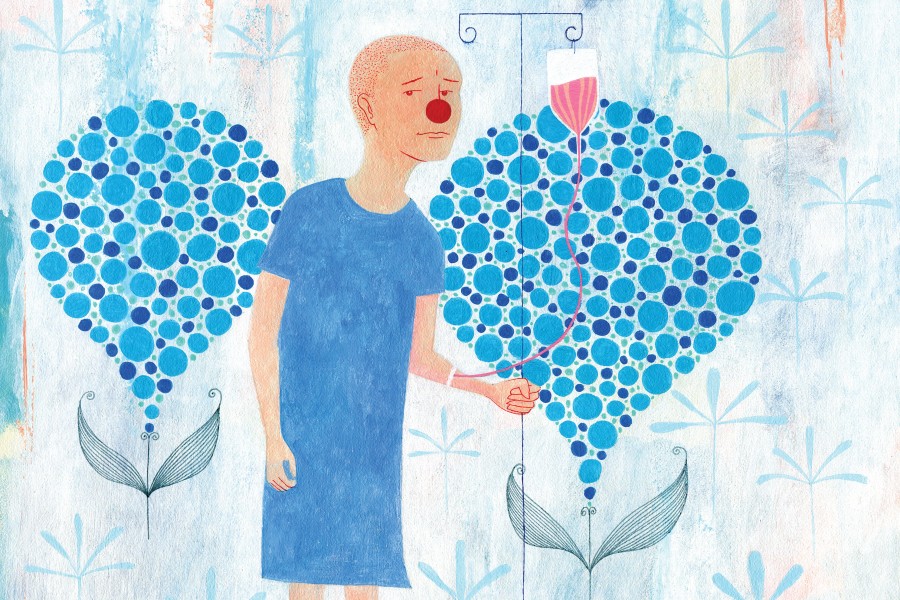 The first thing oncology nurse Pete Linkroum, Nurs '15, always asks his patients: "How are you doing?"

"I'm killin' it," replied a new patient one day, a young girl.

"Yeah—I'm killin' it, because otherwise, it's killin' me," the patient quipped.

The exchange set the tone for the nurse-patient relationship the two would sustain over the next few days. Even as Linkroum could see the side effects of chemo setting in, his patient kept up their inside joke, feeding an easy sense of trust between them.

Studies have shown that the use of humor in health care settings, sometimes called "therapeutic humor," can enhance the immune system, improve digestion, and generate better sleep and pain management by increasing endorphins. Anecdotal evidence also suggests psychological benefits that come with reframing a difficult situation in a more humorous light, helping to relieve stress, says Anne Belcher, associate professor and co-director of the Office for Teaching Excellence at the School of Nursing.

Therapeutic humor won't change a clinical outcome—it can't shrink a tumor or erase heart disease. But it can help patients better navigate the processes of illness, recovery, and even dying, says Belcher, who has a long-standing interest in the health benefits of humor and spirituality. "I have seen people handle chemotherapy and radiation therapy very well, and my sense is that—to some extent—it's because they incorporated humor into their bag of coping strategies."

Belcher is a member of the Association for Applied and Therapeutic Humor, an international nonprofit founded in 1987 by a nurse. The group—which defines therapeutic humor as "any intervention that promotes health and wellness by stimulating a playful discovery, expression or appreciation of the absurdity or incongruity of life's situations"—offers education, research, and support to its members, who range from scholars and health care providers to funeral directors and clergy.

Therapeutic humor doesn't mean laying a string of one-liners on an unsuspecting patient, or teasing her or using sarcasm. It's about tuning in to the ways a patient views her situation and following her lead if she takes a turn toward the lighthearted. Just as a patient and provider might connect over a shared interest in baseball or a favorite movie, humor provides another avenue toward the common ground that generates trust between individuals. It can also offer a step back from a difficult situation, a reminder that life can still be larger than fear and pain alone.

Before he started using therapeutic humor with his own patients, before he even became a nurse, Linkroum experienced it on the receiving end. A National Guard combat medic in 2009, he sustained a nerve injury to his right arm during his second tour in Afghanistan. Unable to use his dominant hand, he was sent to Walter Reed National Military Medical Center, where he says he received outstanding medical care and almost reverential respect for his service. But something important was missing: The team he'd been part of for the previous four months had used humor to bond and to manage the stress of life-threatening combat situations, and he felt uprooted from that support system. It wasn't until a friend from the team came to visit, and the two indulged in gallows humor until they laughed and then cried, that he felt his coping mechanisms kick in. "Getting my humor back in the hospital was a big part of my recovery."

Linkroum's combat experience drew him to end-of-life care, and in nursing school, he signed up for Belcher's class on death and dying. The class did a lot of laughing together—Belcher says she often jump-starts humor by telling a self-deprecating story, like the time she fell off a stage while moderating a panel discussion and pulled the table and a pitcher of ice water down with her. Laughing with his classmates, Linkroum realized the group was able to talk about anything and feel comfortable together because of the implicit trust that humor builds. "I can't think it's funny unless you think it's funny," he points out.

So, when his patients express readiness for humor, Linkroum embraces it as a means to build their relationship. If the illness is terminal, the patient will eventually rely on him completely, and that bond will be a crucial element. "If we do have that trust, if we've laughed together for weeks or months, when we get to the point of total care, it's a positive experience," he says.

Linkroum recalls arriving to bathe a patient with whom he had not yet found an opening. But as Linkroum lifted the blanket from his emaciated body, the patient joked: "Sorry about the Mr. Universe legs." Afterward, not only did the patient seem to make peace with the potentially embarrassing situation of being bathed by someone else, Linkroum noticed, but he also seemed generally less anxious and more at ease as the days unfolded.

People in end-of-life and combat situations have in common constant uncertainty, Linkroum notes. Patients can be hit by sudden infections; soldiers can be hit by random rockets. His military team could find humor in gruesome and sad situations, and Linkroum says it made them successful as a group and also protected him from the post-traumatic stress that many combat veterans experience.

The humor that helped him endure combat and avoid internalizing the stress can help his patients in the same way, he believes. "I hope it does for them what it did for me: It allowed me to be more comfortable with my situation. It allows them to get a little distance from what's happening." He adds, "One of the best ways to cope is to get that separation. Life goes on, it's OK to laugh about it, it's OK to have fun. If you're laughing at something, it's hard to be suffering at the same time." He likes to quote George Bernard Shaw: "Life does not cease to be funny when people die any more than it ceases to be serious when people laugh."

Like Linkroum, Belcher first experienced therapeutic humor while dealing with her own stresses. As a nursing student, she and her dorm-mates would act out funny skits for one another describing events from their harried days—things like precipitous births or cute things kids said. More than four decades later, she still uses role-playing to shift her perspective on troubling situations. "Sometimes just telling it makes it seem much funnier than it was at the time," she says.

In the mid-1980s, Belcher was part of a team researching how young men with AIDS used spiritual coping strategies to deal with stress and depression, and she learned that humor was one of those strategies. "They knew cognitively they were in a very serious situation, but if they had a strong spiritual sense, their outlook was more positive," she recalls. So Belcher used to ask her cancer patients—and now teaches her students to ask them—what it means to have cancer. It's a way of opening a line of communication the patient can take in any direction he chooses. Often, the answer is along the lines of, "I realize how important it is to live every day to its fullest," but sometimes it's, "If I have chemo and my hair falls out, maybe it will grow back brown and curly." The latter sort of reply is an invitation to connect on a more personal level and a way for a patient to regain some control of his situation, Belcher says—an affirmation that the patient is not just a patient but an individual, with an identity and roles and interests beyond the walls of the hospital. "You have to have a nice balance, and humor is one way to say, 'This is how I am, this is what I enjoy, and if you react, I know you're really seeing me, not just a patient,'" she says.

For patients, entering into humor often helps them shift briefly from being and feeling sick into being themselves, agrees Rab Razzak, director of outpatient palliative medicine at Johns Hopkins Medicine. "They remember they're human. They remember they're living. That's what my objective is: to improve their quality of life and their joy," says Razzak, who wisecracks so often that people started telling him he needed a stage. So he got one: he's also an amateur stand-up comic, and he even appeared in comedian Rob O'Reilly's West Hollywood show.

For doctors and other care providers—many of whom experience burnout and compassion fatigue—humor can be a form of self-care, Razzak adds. Finding a humorous angle together can serve as a doorway to deeper connection with both colleagues and patients, buffering the pressures of the job. "The work that we do is so heavy that humor just makes working easier and more fun," he says. "It brings people together, makes an atmosphere of a team and family, and helps create better communication."

Rachel Wallach is a freelance writer in Baltimore.