In search of lost fun 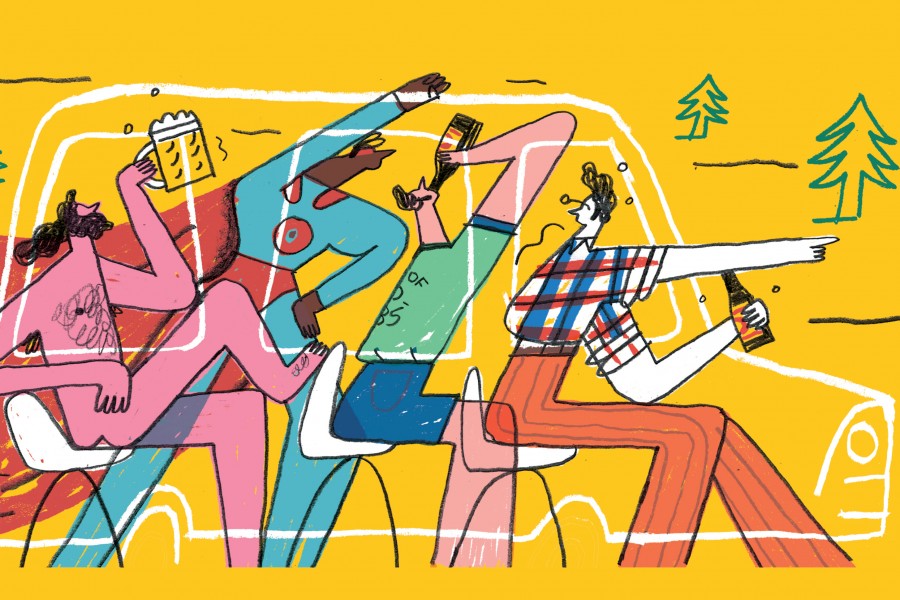 Johns Hopkins does not have a reputation as a party school. There is no Girls Gone Wild video about the women of Johns Hopkins. When I was a student there, ca. 1980s, it enjoyed a perversely self-congratulatory reputation as a tense and joyless place, where "throat" (as in cutthroat) was part of the undergraduate vernacular and you could find pallid figures slumped over their textbooks at all hours in the timeless subterranean depths of the library's D-level. Against this bleak background, we goof-offs and fun-seekers found one another as easily as atheists making eye contact while everyone else's heads are bowed. When one of those friends and I turned up at our 10-year reunion, our former class president tried to throw us out, instantly sizing us up as party crashers.

I'm advised that occasions and venues for officially sanctioned fun are more numerous on the Homewood campus now than when I attended, but in those days, you pretty much had to make your own. A friend and I once constructed a robot servant out of junk in a friend's apartment, as a surprise; another friend and I dressed up as a costumed superhero and villain and did battle with sparklers at Spring Fair; one night several of us sat in chairs and took a pretend road trip to New York City, in real time. The last session of one writing workshop ended several hours late with the detonation of fireworks in a pie in Wyman Dell; as they lit up the night sky, the perpetrators fled to the four corners, not to see one another again until the next semester.

Oh, the libelous things I could write! The staid and respectable people I know who behaved very disreputably indeed! I once watched a future leading spokesperson for transgender issues persuade a future leading spokesperson for Asian-American issues to eat Meow Mix. I saw a future Fox commentator seized by paranoia while on LSD at a Grateful Dead concert who, "sensing an element of coercion," slipped free of his friends (captors!) and made good his escape into the crowd, not to reappear until the next morning when he turned up at our hotel room door looking sheepish. I saw the second-best minds of my generation deranged by boredom, munching out giggling pantsless/Staggering through the Hampden streets at dawn looking for a meatball sub.

A lot of the fun was, of necessity, illicit. There was a lot of what wet blankets might call alcohol and drug abuse, and although there wasn't much sex, there was rampant nudity. (It was sort of a phase we went through. There was naked boxing, naked do-si-doing, a naked a cappella version of "White Rabbit" in a reverberant tiled bathroom.) There was also a lot of what you might call—again, if you wanted to be a stick-in-the-mud about it—criminal trespass. I remember sliding down the multistory corkscrew fire escape slide in The Charles, whirling through the dark for what seemed like a lifetime, only to emerge, reborn with a bang, through a pair of metal doors into PJ's Pub in the basement; sneaking into the network of underground steam tunnels beneath the campus and running through those Nostromo-*like corridors until I gashed open my scalp on a protruding pipe; slipping through an open window into Gilman Hall at night to switch off the clock tower. I remember standing out on the quad the day after that last one, a senior a few days away from graduation, looking up at it with hungover satisfaction, having arrested, if only briefly, the humorless, businesslike rush of time.

The Fun Years seem to be mostly behind us now. Not to say there's no more fun to be had; just that, like sex and drugs, it's gotten harder to arrange. Certainly after college you will never again in your life have so much time to devote to hanging out, goofing off, flirting, and cracking each other up. Once people have careers, homes, and children, their lives become richer and more meaningful than they ever could have imagined, which can make them look, to the casual observer, as if they'd rather be dead. In her handbook on creativity, What It Is, cartoonist Lynda Barry invites us to imagine what would happen to a child who was never permitted to play. (A grim gedankenexperiment that's currently being carried out in the real world; we will soon see the results.) She wonders why we expect adults to thrive deprived of this essential human activity. Shirley Jackson: "No live organism can continue for long to exist under conditions of absolute sanity."

"I posit that fun is an underrated medicant," my fellow alum Aaron Long wrote in an article for the MAPS Bulletin, the scholarly journal of psychedelics. Most adults think of fun as a necessary outlet for the stresses of our real lives—our working, "productive" lives—or a product to be bought. Some people think of it as a frivolous waste of time. But the serious business of adult life—survival, securing resources, and reproducing—is what all animals do, from microbes on up; playing is distinctively (if not uniquely) human. I would argue that it's one of the main things we ought to be doing in our inexcusably brief time on Earth.

I still prefer the Johns Hopkins model of fun—jerry-rigged, DIY, and at least semi-illicit—to the prepackaged brands. (Institutionally contrived fun often just makes me feel embarrassed and sorry for everyone involved.) And some of my fellow alumni are still among my most reliable accomplices: Aaron, Carolyn, and I have driven cross-country together, staged many an illicit caper, ridden the circus train to Mexico City, and infiltrated the National Spelling Bee. Dave and Dave (now a NASA engineer and a national magazine editor, respectively) finally produced the rock opera about the War of 1812 they'd been working on since they lived together in their postgraduate bachelor apartment.

I recently saw Dave at a hoot­enanny in a South Baltimore pub, another DIY fun occasion. Dave, who's had a bad year of it, with several deaths in the family, told me: "Bad times are going to happen on their own. The good times you have to make happen yourself."

*From Alien, not Joseph Conrad.

Tim Kreider, A&S '88, an essayist, is the author of We Learn Nothing and the forthcoming I Wrote This Book Because I Love You.