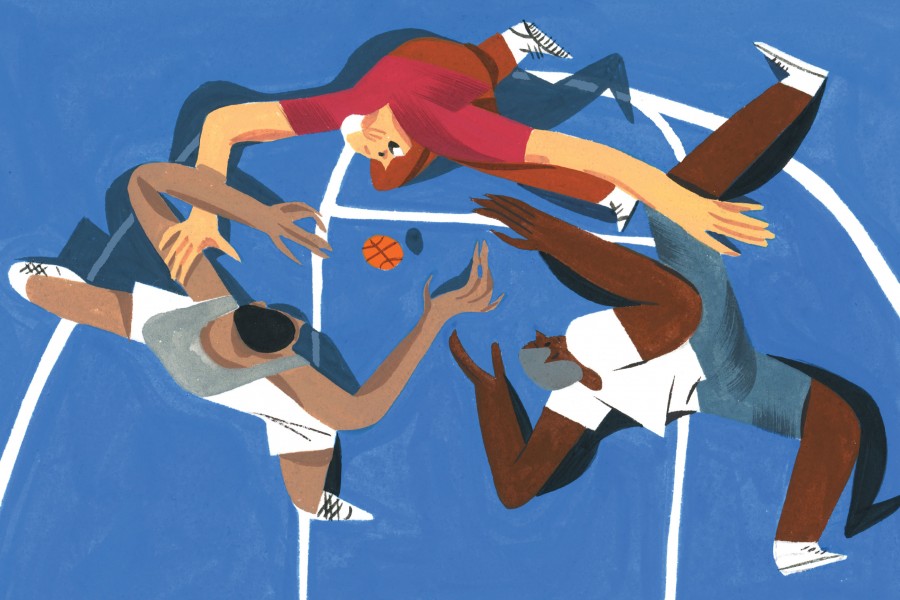 There were probably more East Asians and Upper East Siders than black dudes from East Baltimore hanging around campus during my time at Johns Hopkins. Many of those students seemed slightly put off by my presence, so I never really found a relatable Hopkins community––not until Chuck, a 6-foot-7 university employee, caught me throwing up shots in the gym and invited me to a weekly pickup. "The game is on Wednesdays and Fridays around 11," he said, "right here on Homewood." I asked him about the competition, and he said it varied, which was great for me because I was far from being in basketball shape and was on that grad school diet—you know, multi­flavored carbs dusted with salt.

I thought "varied" on JHU's campus meant a few brothas (black dudes like me and Chuck), a few bros (the frat white boys who wear cargo shorts with flip-flops all year round and address everybody as "bro," even the women), and some of the Asian kids I saw dribbling around campus. This could be good for me, I thought. I could shake the rust and use these guys to work my way back into East Side–Baltimore shape just in time for the summer. So I took Chuck's offer and hit the gym a little after 11 on that following Friday morning.

A game was in progress. I spotted Chuck first, snagging a rebound over everybody and seamlessly weaving between defenders, running the floor, gazellelike, coast-to-coast and sinking a midrange jump shot. The guy guarding him, Paul, was almost his size and answered right back with a similar shot. Both of them looked pretty talented. And I guess the rest of the crew out there fit Chuck's definition of "varies."

A multiracial blur of ballers flashed back and forth; among the pack were some middle-aged dudes who could've been professors or grad students and some uncoordinated baby-faced undergrads. There were a couple of employees who were switching from their work uniforms into hoop clothes, and a handful of professors that included Lester Spence; Bill, a 70-year-old from the History Department; and Ralph, a 75-year-old astronomer who never got lost in the mix, outran people half his age, and occasionally hit a two-hand, over-the-shoulder swing shot.

Who would have thought that the most diverse place on campus, both in age and race, would be a basketball game in the middle of the day? Dave Elbert, from the Department of Earth and Planetary Sciences, has been playing in this pickup since 1993. "The game has been going since at least the early 1980s," he says. "The noontime hoop phenomenon is pretty well-known across academia."

My noontime debut went well. I wasn't the best, I wasn't the worst, and I didn't leave in pain. I liked the game so much that I've never stopped attending. Balling with that crew has become a weekly routine and really the only bit of nonliterary fun that I can afford to squeeze in between my tour, the classes I teach, and my writing schedule. It's also the most interesting pickup game that I've ever been a part of—not because of differences in age and background, or the fact that a snapshot of us would make a great cheesy campus diversity flier. No, it's the language. There's nothing funnier than hearing a group of 30- to 70-plus-year-old intellects go back and forth over a travel or foul call. We're experts in our respective fields, but not on the court. We argue, we trade jokes and cheap shots, and then we all shake hands after the game.

Sometimes the humor and conversations spill off the court after the games. They range from politics to school politics to corny jokes that only we get. The convenience of the lunchtime game is addictive, and I've grown to admire all the guys who participate, even the conservative ones, because really, at that time and in that place, we are all united by basketball. I've been playing in that Wednesday/Friday game for about four years now and can honestly say I would not prefer to play anywhere else in the world.

Dwight Watkins, Ed '11 (MEd), is the award-winning author of The Beast Side and The Cook Up, and a professor of creative writing at the University of Baltimore. He lives and does community work in East Baltimore.