Solomon W. Golomb, A&S '51, a pioneering scholar in the fields of mathematics and engineering, died May 1 at his home in California. He was 83. 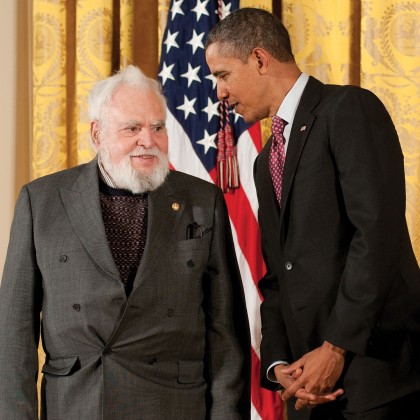 Golomb was known for his groundbreaking work in communications, including shift register sequences. He invented Golomb coding, a data compression method, and Golomb rulers, a specialized ruler used in radio astronomy and information theory. He was also known for creating mathematical games, including Cheskers, pentominoes, and polyominoes—which served as the inspiration for Tetris. He created the popular and long-running Johns Hopkins Magazine word puzzle Golomb's Gambits, which he authored for 32 years. The first Golomb's Gambits puzzle appeared in the April 1984 issue.

A graduate of Baltimore City College high school, Golomb earned a bachelor's degree in mathematics from Johns Hopkins before his 19th birthday. He went on to receive master's and doctoral degrees in mathematics from Harvard University. He spent more than 50 years at the University of Southern California, where he was a distinguished professor of electrical engineering and mathematics and the Andrew and Erna Viterbi Chair in Communications.

"With unparalleled scholarly contributions and distinction to the field of engineering and mathematics, Sol's impact has been extraordinary, transformative, and impossible to measure," Yannis C. Yortsos, dean of USC's Viterbi School of Engineering, wrote in a message announcing Golomb's death. "His academic and scholarly work on the theory of communications built the pillars upon which our modern technological life rests. His work on cryptography ushered in new approaches for securing communications signals. And his awe-inspiring inventiveness in mathematical reasoning has led to wonderfully playful discoveries of mind-twisting games."