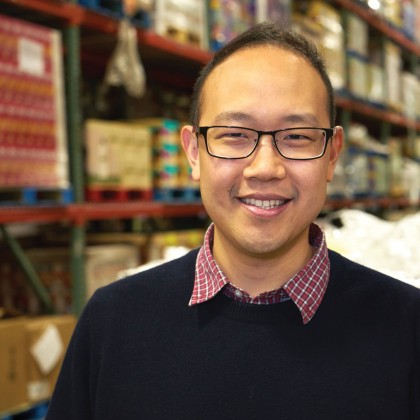 Chieh Huang, A&S '03, has never shied away from going against the grain. After college, he taught English in rural Japan while his peers built traditional careers. He returned to convention—law school and a firm in New York—but realized the grind to make partner was not for him. Instead, he moved into a friend's basement and co-founded a mobile game studio that was eventually acquired by gaming giant Zynga. After two years running that company's New York office, Huang returned to entrepreneurship once more, packing it in for a garage in New Jersey where he founded Boxed in 2013. The bulk goods online retailer lets shoppers pick up wholesale deals on everything from paper towels to peanut butter, primarily through its mobile app.

How did your previous experience inform Boxed?
First-time entrepreneurs just solve a problem and hope it goes well. With repeat entrepreneurs, you not only solve a problem, you look for changes taking place in the world that become tailwinds to help the business exponentially grow. With our mobile game, we made a good game that we wanted to play, and we went out and did it. With Boxed, we not only wanted to solve a problem for people who didn't have the means—like a car—or the time to go to a brick-and-mortar BJ's or Sam's Club, we saw that everything was going to go mobile, including commerce. This last bastion of offline behavior is going to go online. Those are the tailwinds—that change that will come and hopefully will be in our sales over the next five or 10 years.

Why did you choose to sell bulk package goods?
It's a function of growing up in Jersey. Every other weekend I went with my parents to what was Price Club at that time. What I found when I moved into Manhattan with my own family was that we didn't have the physical means to access a wholesale club anymore. I thought: Who else has the same problem I do? That was the genesis of the idea. We did it on mobile not only because of what we saw at Zynga, where they didn't make the transition to mobile fast enough, but also because of the demographics. Sixty percent of wholesale club members today are boomers or seniors; that demographic is aging pretty rapidly. Is there a service for a younger generation that's going to have the buying power to purchase wholesale goods over the next five to 10 years or so? That was how we picked not only bulk goods but also to do it on a mobile device.

How did people react when they heard about Boxed?
On the first day, we hired two interns and I told them this is what we're going to do. After they heard, one of the interns quit on the spot. That was how some people reacted. Three years ago, people were not buying things on their phones yet. So it was met with a lot of skepticism and scrutiny, and rightly so. Those were tough times in the beginning.

How did you overcome that skepticism, particularly with funders?
It was a confluence of three factors. First, we were lucky enough that we had a successful outcome at our last company. So people said, "I think this is a dumb idea, but if anyone's going to figure it out it will be you." Second, I told them that only 1.5 percent of consumer packaged goods sales happen online. Even if the industry gets to 5 percent online, there's a gigantic opportunity. And what, over the next five to 10 years, is not going to be online? Third, I showed them our ride with Zynga, that there's an opportunity for mobile in just about every consumer vertical. That's where consumers are going, but, for one reason or another, not everyone is capitalizing on it.

What are the lessons you've learned about how to manage your brand in a fast-growing company?
Don't lose sight of who you are and what type of culture you want the company to have. From garage to now, we've raised close to $150 million, so it's easy to just fill seats with people who are really good but don't fit well with the company, or fill seats with warm bodies so the work can get done. But I feel like that's where you really lose your way. For us, taking our time and vetting people and then taking the time once they're here to really integrate them into the culture has been important.

You've offered to send the children of your employees to college. Why?
When we opened up one of our facilities in a depressed area of Atlanta and I went there, of all the people we hired, only one person could afford private transportation. I thought, 'How in clear conscience can you operate a company where people can't afford a car, yet the company is in the news for raising all this money?' Then I thought about how I was blessed to be in the position I'm in today. I looked back, and it really was the focus on education. If you're an hourly employee, are your kids going to be able to afford a $45,000 college tuition bill even if they're hardworking and smart enough to go? The answer in America right now is probably no. So how do we help them break out of that cycle? If Boxed is a success, I'll have more stock and more funds than I'll ever need in my life. If you think about any major retailer in America and you think about the founding CEOs of those companies, if you divided their net worth in half, that could pay for many, many, many tuitions.

Why be an entrepreneur?
What I've realized is that life is great when you find a marriage of what you're good at and what you enjoy. Sometimes, you might find one or the other. But finding the two is where I think life really blossoms. I was lucky enough to get the chance to try my hand at something I really loved—building something from the ground up and being an entrepreneur. And I was awfully fortunate that I found I am pretty good at it.