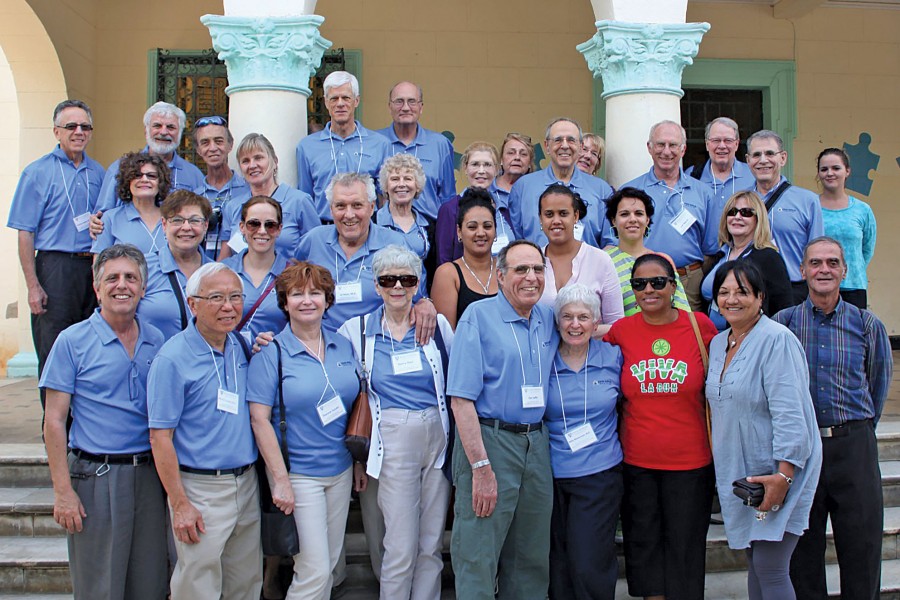 Image caption: The School of Medicine’s Class of 1970 delivered medical supplies, including surgical supplies and textbooks, to facilities in Cuba.

They call themselves the Blaze of Glory class, a title plucked from a letter of admonishment written by the dean and circulated among the Johns Hopkins University School of Medicine Class of 1970. Too many students seemed restless in the last quarter of their final year, the letter read, but if they buckled down, they could go out in a blaze of glory. Come May 1970, the students walked across the graduation stage, and though they now practice in places as varied as Myanmar and Mexico, the nickname—and camaraderie—stuck.

While the classmates continue to keep in touch and attend typical reunions, a number of them also travel together, with a trip to Central Europe in the books and one to Iceland planned for August.

Most recently, though, the group's focus turned outward, with a humanitarian trip to Cuba. Ron Oser, Med '70, and his wife, Donna—an organizer of many reunions—suggested the trip after hearing classmate Bob Lerer, Med '70, speak at an alumni event. They learned that Lerer, a pediatrician and the commissioner of public health for Butler County, Ohio, had come with his family to the United States from Cuba at age 14, shortly after the Cuban Revolution, and that his Johns Hopkins classmates played a key role in his acclimation to American culture. The physician told the audience about how, for 20 years, he's organized trips to Cuba to deliver medical instruments and supplies, and bring expert lecturers to hospitals in need.

When Oser posed the idea of a Blaze of Glory trip to Cuba, Lerer saw an opportunity to give back to the classmates who supported him in a time of self-doubt. "These people really cocooned me, and they took care of me at a time when I was a really insecure guy at school," Lerer says. "I wanted them to have an outstanding experience." He secured the necessary clearances for the trip, contacted medical facilities, and arranged for Cuban families to offer homestays for a portion of the trip, while the Osers garnered interest from other classmates. In early March, 14 Class of 1970 classmates and 12 family members landed in Havana.

Cuba has one of the highest densities of doctors per capita in the world, Lerer says, but its hospitals often lack essential tools, such as surgical supplies and up-to-date textbooks. The group brought thousands of dollars in supplies and expertise to three autism programs, a nursing home, and a national cancer hospital, among other places. Lerer's long-standing relationships with the Cuban medical community permitted a behind-the-scenes experience. "Going with somebody who was familiar with the country and bringing supplies to people who had no supplies was much more worthwhile than going just as a tourist," Ron Oser says.

And that's exactly how the Blaze of Glory alumni wanted to see Cuba—unmasked, re-emerging, and full of possibility. "We had a class of amazing idealism," Lerer says. "And that idealism, that desire to change the world, stayed with the class."