Why you can't stop checking your phone 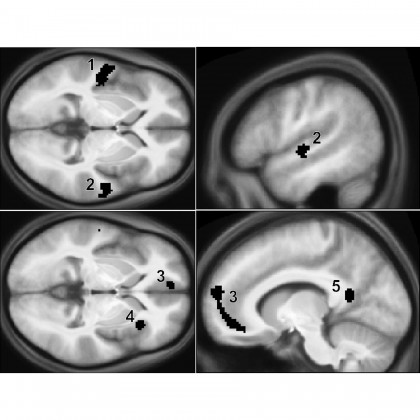 Image caption: Parts of the brain activated by reward conditioning

TITLE: The Role of Dopamine in Value-Based Attentional Orienting

Dopamine is a chemical released in the brain by neurons to transmit signals to other neurons. Most forms of reward—chocolate, a funny email, winning a game, music—result in more dopamine flooding our brains.

Think of attention as what your brain has selected to be aware of from all that sensory input. The brain cannot attend to everything that comes in through our senses. It must pick and choose: pay attention to this, don't pay attention to that. This is attentional orienting. It's like tuning a radio to a specific frequency.

Whenever we imbue something with value—that is, when we attach a reward of some kind to an object or action—we alter how the brain processes certain stimuli. Those processes become value-based.

Attention has been getting a lot of attention. Mindfulness meditation, the power of habit, the productivity gains of doing one thing at a time—all have cycled through the attenuated attention span of the public. Pay attention, we remind ourselves time and again, taking for granted that focus is something over which we have complete control.

Neuroscientists attend to attention as well, probing the brain to figure out what happens when we focus and when we lose focus. A research team led by Susan M. Courtney, a professor of psychological and brain sciences in the Krieger School of Arts and Sciences, recently completed research initiated by the late Steven Yantis to determine how reward might affect attention. They learned that when it comes to paying attention, our brain chemistry has a say in the matter.

Courtney et al. asked 20 research volunteers to look at different colored objects on computer screens and pick out the red and green ones. For each red object they found, they were paid $1.50; for each green, $0.25. The next day, the researchers monitored the volunteers' brains with PET scanners as they watched the monitors again, only this time they'd been asked to pick out shapes. The color of the objects did not matter and there were no rewards, yet whenever the subjects glimpsed something red, they tended to automatically focus on it, and a part of their brains involved in attention became flushed with dopamine. The rewards from the day before were still directing their attention, and they had no say in it. The level of distraction correlated with the amount of dopamine released. So our brains pull us back to things that rewarded us in the past. The more distracted a test subject was, as measured by how slow they were to respond to the relevant shape when the previously rewarded color was present, the greater the release of dopamine. Some people may be better at overriding chemically driven distraction than others.

Hey, is that a doughnut?