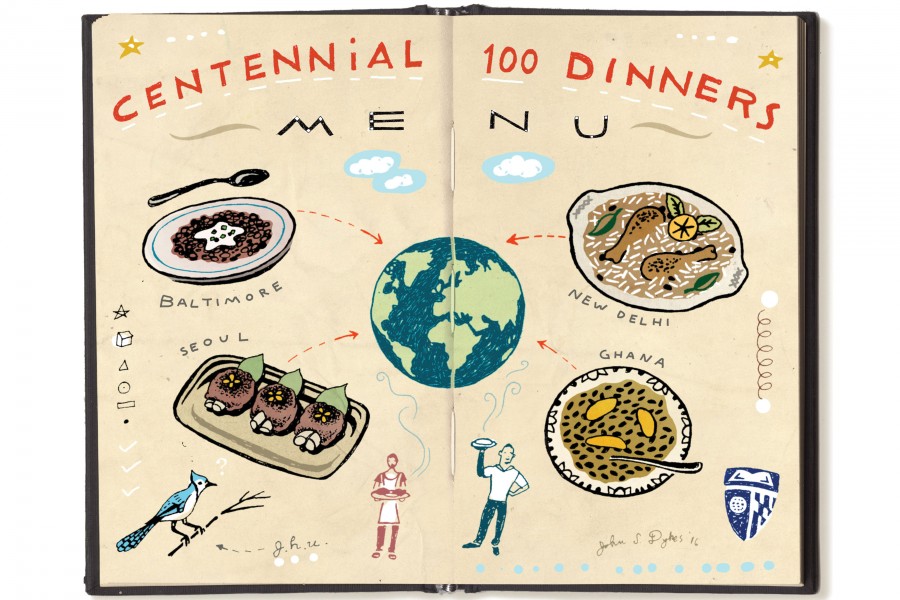 In New Delhi they gathered over biryani and chicken lababdar. In Seoul it was short rib patties. Groundnuts, chicken, and cassava were on the menu in Uganda, while in Baltimore, it was bowls of chili. Though the dishes varied as widely as the time zones in which they were served, there was a single purpose: to celebrate the Bloomberg School of Public Health's centennial.

Launched last summer, the Centennial 100 Dinners initiative invites alumni, students, faculty, staff, and friends of the school to come together for a meal. The call to table has so far been answered in more than 20 countries—from Peru to the Philippines—and the 100-dinner goal was surpassed in December. (Don't worry; dinners will continue throughout 2016.)

Dean Michael J. Klag, SPH '87, popped in on the New Delhi event in October. "There's something pretty special about so many people who work in different countries and different parts of the public health community coming together to enjoy a meal, united by our school's mission," he says. The Delhi dinner was among the largest to date, with more than 30 people noshing on 15 different Indian dishes—and that's not including desserts. It was hosted by Ashok Agarwal, SPH '83, a university trustee and founder of the Indian Institute of Health Management Research, which runs a collaborative master of public health degree program with the Bloomberg School. For Klag, Agarwal's participation had special significance: "There was this wonderful sense of a cycle completed—a young physician who came to Hopkins to study public health returned to India and accomplished great things, and now is a bridge between Baltimore and India."

As far-flung members of the Bloomberg School family continue to break bread together—be it naan, pita, or brioche—the hope is that the connections established and friendships renewed will continue beyond the meal.

William Checkley, Engr '93, SPH '96, '02 (PhD), the medical director of Johns Hopkins Medicine International and an assistant professor in the Bloomberg School, has made it to four dinners so far—two in Peru, two in Africa. "I'm going to be in London later this year," he says. "Maybe we'll organize one with fish and chips."