Though Edward C. Held, Med '26, died in 1988, he's still a beloved figure in Hempstead, New York, where he practiced medicine for nearly 60 years. He was known for making regular house calls, occasionally bringing groceries to patients who couldn't afford them. A police and fire surgeon, he would ride his bicycle to the local station every Sunday to personally deliver doughnuts. And his longtime friend Helen Duryea will never forget how Held arrived at her home on Christmas, just so he could hold her father's hand as he was dying. "He was a marvelous diagnostician," she says, "and he was very, very kind." 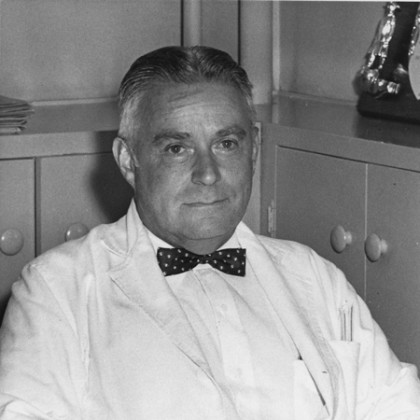 Despite a 27-year age difference between Held and Duryea, the two grew close. They celebrated holidays together, and Duryea helped Held run his office in addition to her own thriving career as a real estate and insurance agent. "He really was almost a family member," she says. Neither ever married, though Held once proposed to Duryea. She declined, but they remained devoted to each other. They were so close, in fact, that Held's nieces and nephews called Duryea "Aunt Helen." To this day, she keeps in touch with many of Held's relatives.

When Held died, he left the majority of his estate to Duryea. In turn, she knows he would be pleased with her decision to give much of that inheritance to a place that meant a great deal to him—his alma mater. In 1996, seven decades after Held graduated from Johns Hopkins, Duryea established the Edward C. Held, M.D., Scholarship Fund with a gift of $100,000. Now 87, and with the goal of building the scholarship to at least $1 million during her lifetime, Duryea recently set up several Johns Hopkins charitable gift annuities, directing any money left over after her death to be added to the fund. Last year, the Held endowed scholarship granted about $7,500 in aid. But the hope is that the fund will one day cover the full cost of one student's tuition, which currently clocks in at $48,750. "He'd be proud that he was enabling some student to become a doctor, who might not have been able to go to medical school otherwise," Duryea says.

So far, 12 students have received awards from the Held fund and gone on to work throughout the country in specialties like pediatrics, infectious disease, emergency medicine, and radiation oncology. Recipient Khoi D. Than, A&S '03, Med '07, was born to Vietnamese immigrants and is now an assistant professor of neurosurgery at Oregon Health & Science University in Portland, Oregon. He says his training would not have been possible without Duryea's gift. "You hear about students who don't go to as reputable a medical school and graduate with $200,000 or $300,000 in debt," he says. "The fact that this scholarship, along with other grants, supported half of my education means that the amount of loans I have is about half the average med student's. That's a huge deal."

Roy Ziegelstein, vice dean for education at the School of Medicine, says need-based scholarships are essential to attract bright students from a variety of backgrounds. According to the school, 41 percent of candidates who chose not to attend Hopkins in a recent application year cited financial concerns as the primary reason. Educating a varied group of aspiring doctors, clinicians, and scientists, Ziegelstein says, is crucial in order for the health care workforce to best treat an increasingly diverse patient population. He points to studies showing that a more diverse physician workforce leads to improved access to health care and more culturally competent care, among other benefits. Work by Lisa Cooper, vice president for health care equity for Johns Hopkins Medicine, also suggests that access to a more diverse physician workforce may lead to greater patient satisfaction and better health outcomes. Ziegelstein notes, too, that exposure to cultural differences in medical school helps broaden the perspective of all future physicians, an outcome that should have benefits for patients and for our society. "Diversity doesn't only produce a stronger school. I believe it eventually produces a stronger and more excellent medical community," he says.

Duryea even wonders if the scholarship could help lead to the next great medical discovery. "Some of these people may find the cure for cancer," says Duryea. "Maybe without this money, they wouldn't have that opportunity."