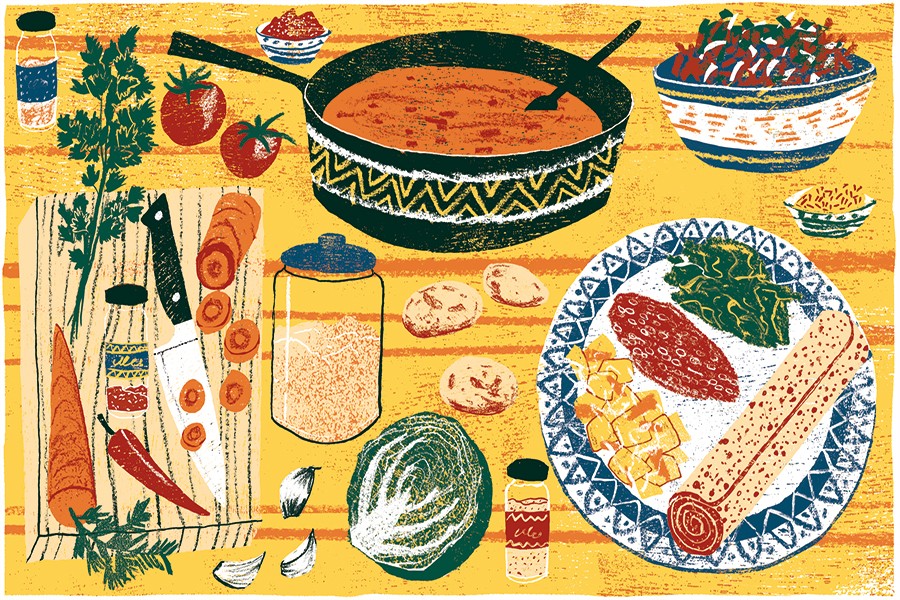 Adante Hart has half of his eight-person class doing kitchen prep work while the other half observes. One young man seeds jalapeños. One young woman dices garlic and red onion; another chops potatoes.

They've gathered on a cold January evening in the Charles Commons kitchen on the Homewood campus for Hart's Intersession class, Meals From the Motherland: Tasting Foods of the African Diaspora. They're making five dishes: four from Ethiopia including shiro wat, a stew made from chickpea flour; tikil gomen, a flavorful mix of carrots and cabbage; timatim, a salad of tomatoes and peppers; mesir wot, a red lentil stew; and a Kenyan dish called sukuma wiki. "Sukuma wiki means 'stretch the week' in Swahili," Hart tells the class, adding that its use of a hearty green makes it a year-round staple in Africa. He's using kale—if an ingredient is exotic, he uses a more available option—braising it with white onion, tomato, and seasonings. He drops cumin, coriander, and turmeric into a heated pot, stirs, and smiles. "This is my favorite part," he says, "when the spices dance in the oil and you start to smell them."

By day, Hart, A&S '11, works as a research assistant in the data coordinating center of the Bloomberg School of Public Health's Center for Clinical Trials and Evidence Synthesis. Since fall 2013, at nights and on weekends he has taught cooking classes at churches and assisted-living public housing projects as a volunteer instructor for Oldways, a nonprofit food and nutrition organization, and as part of ventures such as the Baltimore Faith and Food Project, a collaboration with the Johns Hopkins Office of Community Health that is part Bible study, part cooking lesson. He's trying to wed his interest in cooking and nutrition with improving African-American health outcomes.

A 2014 study by Hopkins' Center for a Livable Future showed that people who cook at home consume fewer carbohydrates and less sugar and fat. "That's one reason why I like teaching these classes," Hart says, "to eliminate the barriers to understanding nutrition and to show how easy it is to make these meals." It's a lesson he had to learn himself. Hart was born and raised in Miami, the son of a single mother who worked for the postal service. As a latchkey kid he often found himself eating fast food and maintaining a horrible diet. In college, he started cooking for him­self, lost weight, and felt better. As a Johns Hopkins undergraduate, he got involved with Healthy Bodies, Healthy Souls, a project run by the Bloomberg School's Joel Gittelsohn to determine whether a food intervention and education program could reduce risk factors for high blood pressure among primarily African-American churchgoers.

The summer after his sophomore year, Hart spent weekends at a Seventh-day Adventist Church in north Baltimore doing food demonstrations and passing out food-related information. For eight months during his junior year he interviewed people about their food habits and understanding of nutrition. That led to a paper, "Process Evaluation of Healthy Bodies, Healthy Souls: A Church-Based Health Intervention Program in Baltimore City," published in Health Education Research in 2013; Hart was a co-author. He was struck by how little people knew about reading a nutrition label and what they should be eating. African-Americans "have the highest rates of high blood pressure, diabetes, and cancer, and I see this lack of knowledge here," he says. "I decided I wanted to do something, I wasn't sure what, to address those disparities and food-related illnesses."

After graduating, he stayed in Baltimore and got in touch with Boston-based Oldways, which wanted to expand its programming in Baltimore. Would he like to be one of its volunteer cooking instructors?

Combining African foods with nutritional education was a way to spotlight how eating habits can impact African-American health outcomes. "Growing up as a black kid in Miami, single parent, don't know who my father is, I don't know what kinds of ties I have to the motherland," he says. "Teaching these classes has opened my eyes to the foods of Africa and how they relate to the things many of us might've had growing up."

Hart taught his first six-week African cooking class in the fall of 2013 at a church. He's taught some version of it ever since. He does library research looking up recipe variations and the history behind certain dishes. He visits and talks to African restaurants and chefs in Baltimore. In the fall, he taught classes through the Faith and Food program for congregants from two old, large black churches in Baltimore. He's got two more of those scheduled for spring. This winter Intersession class is a chance to teach in a more casual, secular setting. Over two hours, the students help prepare the dishes as he talks about the nutritional benefits of whole grains versus refined grains, the flavors and uses of different greens, and places in Baltimore to find the Ethiopian spice mix berbere. The evening ends with Hart serving the dishes atop round platters lined with injera and everybody sitting down for dinner.