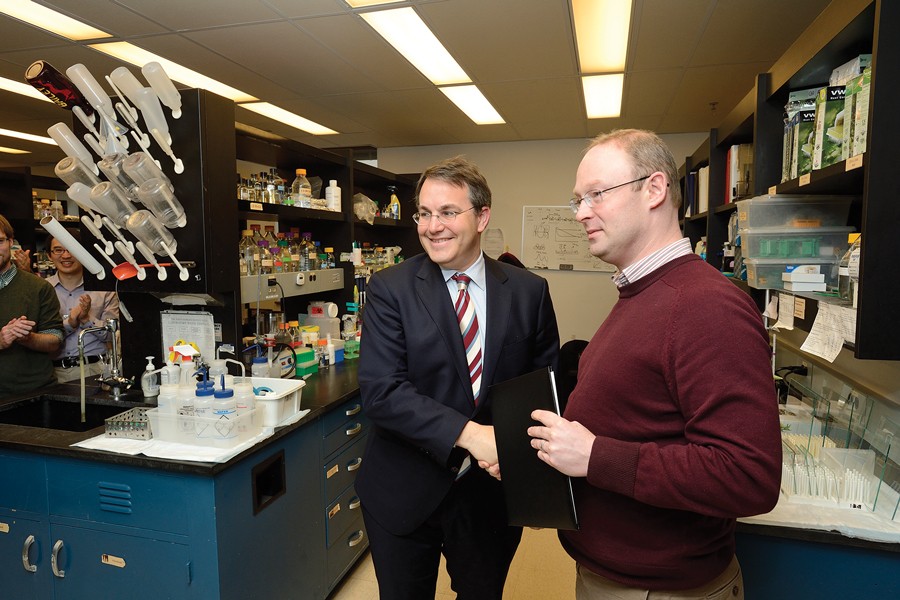 Scott Bailey, an associate professor in the Bloomberg School of Public Health's Department of Biochemistry and Molecular Biology, says his work figuring out the nuts and bolts of cellular structures that nobody has seen before is driven by "just the curiosity of it all." That curiosity has led Bailey to breakthroughs in visualizing the atomic structure of a large multiprotein complex with a key role in bacterial immunity. It's set the stage for the development of new drugs to prevent antibiotic resistance and will foster progress in genome editing strategies that may someday lead to precision treatments for genetic disorders. It also recently earned Bailey the second Johns Hopkins University President's Frontier Award.

"This award is to just dream and follow wherever curiosity leads him in advancing his research agenda," university President Ronald J. Daniels said after he and Provost Robert C. Lieberman surprised Bailey in his lab with the $250,000 award. The award was made possible through a donation from university trustee Louis J. Forster, A&S '82, SAIS '83, and Kathleen M. Pike, SAIS Bol '81 (Dipl), A&S '82, '83 (MA); it will recognize one person each year for five years with funding for their research expenses. When announced in 2014, the program was characterized as an investment in a researcher's potential, rather than a lifetime achievement award.

Three outstanding 2016 finalists are also being recognized with $50,000 from the university to fund research and advance academic pursuits. Those three finalists are Xin Chen in the Krieger School of Arts and Sciences; Michael Hersch in the Peabody Conservatory; and Shanthini Sockanathan in the School of Medicine.

Bailey says he is already thinking about what his team can do with the money, including "the ways we can push into new ground, to take on more risky projects. Government funding is more narrowly defined in what you can do. With this you can go after a problem and really take risks with it. That is where the breakthroughs tend to come."